This article now forms part of the Radio Heritage Collection ©. All rights reserved to Ragusa Media Group, PO Box 14339, Wellington, New Zealand. This material is licenced on a nonexclusive basis to the South Pacific DX Resource hosted on http://www.radiodx.com for a period of 5 years from February 1, 2003. Compilation Editor: David Ricquish

Several areas around Port Moresby were investigated for suitability for the new station and finally a site was chosen adjacent to Wonga Cottage, the home of the AWA coastal station VIG that also housed temporarily the silent transmitter from 4PM.

Several Quonset huts were hastily erected and the equipment for the new 9PA was installed, including a new 500 watt Philips transmitter from Australia. However, this transmitter always operated at half power, 250 watts, due to local electricity restrictions.

Radio station 9PA was officially opened by General Douglas MacArthur and the ABC Director- General, Lieut-Colonel Sir Charles Moses on February 24, 1944. The official inauguration service for the new 9PA was relayed on shortwave to Australia by the adjacent AWA coastal station VIG for re-broadcast by the Australia-wide ABC mediumwave network.

Here is the full text of the official opening of 9PA by General Douglas MacArthur on February 24, 1944:

“I am glad to have the opportunity to talk to the men of this command as a unit. The magnitude of the areas over which we are operating has previously made this impossible and limited my contacts to individual echelons.

My first thought is to tell you of the admiration and gratitude I feel at your splendid fortitude and fighting efficiency. No troops in the world have more magnificently upheld the immortal traditions of the fighting services. You are faithfully carrying your nations sacred trust. No campaign conditions in the history of war have entailed greater hardships than here.

Conditions beyond my control have combined to limit recreational features to a minimum. My concern at this has caused me the gravest anxiety. No one appreciates more than I the need of relaxation and recreation to alleviate the hardship and rigors of the field. To know what is transpiring in the world – to hear the tinkle of music and laughter – to feel something of the little familiar things that link us with home – this is what I hope this station can do. It will be my earnest effort to more and more ease your service and bring to you in increasing degree something of that comfort which you so richly deserve. The way before us is long and hard, but with God’s help which has so richly blessed and guided us in the past, we will finally come to the glory of the end.”

End-Note: There were numerous corrections made on the original handwritten draft. Speech notes courtesy of Gary Schulze via Dr Adrian Peterson

Soon after the inauguration of the mediumwave station 9PA-9AA-9PA and just before he end of the Pacific War, the oastal radio station VIG began once again to carry broadcast programming, this time under the slogan “Radio Guinea”. Programming was generally a relay from mediumwave 9PA and some of these broadcasts were taken on relay by the ABC network in Australia.

The few DX reports at the time do not give any information regarding the programming from the new 9PM, though the ownership is clearly stated as AWA. It is thought that this 100 watt transmitter was the same transmitter that was on the air earlier as 4PM and that was apparently on the air subsequently as an extension relay for 9PA. 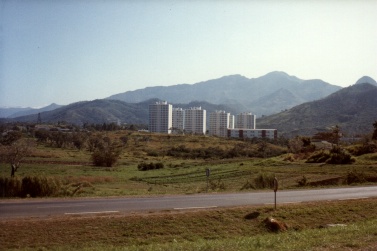