How is a Radio Fair, in Buenos Aires (Capital of Argentina), South America?

Today I want to tell you about the Radio fairs, which are held, more specifically in my country Argentina.

In South America in general, there has been an economic crisis for decades, so don’t expect to see pictures of a major event in this report. Not much less radio brands or commercial sponsors.

I even chose to show you one of the last events I visited, before coming to live in Brazil. I chose an event held by the Radio Club Buenos Aires, a club located as the name says in the city of Buenos Aires, capital of the Argentine Republic.

Despite functioning more like a small flea market, frequented by a few hundred Amateurs Radio, the event is not without its charm and you will often find some interesting equipment and rarities.

In Argentina, over time the hamfests have become widely popular events for both Amateurs Radio and their families, since almost all of them have a barbecue and many attend even when they do not exchange equipment. They meet to chat personally with other colleagues.

In Argentina the Hamfest are typically held in a radio club, on Sundays from 10 am and usually last until 5 pm. There is a small entrance charge and exhibitors are usually asked for a minimal collaboration to help the organizing entity.

I invite you to know a typical Amateur Radio fair, South American style!

Let’s pause the images to tell you What is a Hamfest?

A Hamfest is a convention of amateur radio enthusiasts, often combining a trade fair, a flea market, and various other activities of interest to radio amateurs (radio amateurs). In the UK, the term rally is most commonly used for amateur radio conventions. “Hamfests” were noticed as early as 1924 in the USA.

Hamfests are events organized by amateur radio enthusiasts, for social gathering and promotion of the hobby of amateur radio. Generally, annual or semi-annual events held over a weekend can last from several hours to several days. Most have a flea market where attendees buy and sell radios and related equipment. The equipment found at a hamfest can vary significantly, from the newest high-tech equipment to used, reconditioned, or even old equipment. Haggling is the most common means of sale. Equipment that was originally sold at great cost can often be found at a fraction of the price. Additionally, accessories can be found that are no longer available from manufacturers, and many complete system sales are made to buyers who only need one or two components.

There are boxes that usually contain debris and remnants of finished projects or equipment long gone.

Some amateur parties have demonstration and sales booths run by vendors and manufacturers of commercial ham radio equipment.

The Hamvention in Dayton, Ohio, the International DX Convention, the HAM RADIO event in Friedrichshafen, Germany, and the Central Coast Amateur Radio Club Field Day near Sydney in Australia are events where manufacturers often introduce new products in the ham radio market.

In the United States, hamfests are a popular tradition; Regularly scheduled hamfests in the US begin with an event such as a paid breakfast and proceeds will go to the sponsoring organization or a worthy charity. Larger festivities almost always include one or more food vendors, staffed by volunteers, with the proceeds going to a local high school or other charity.

In the current century, the Internet has been used to advertise and sell ham radio equipment, lowering the sales of used equipment useful at all hobby parties. This, in many cases, has caused the disappearance of many local and regional festivities. Therefore, the social aspects of the hamfests have become one more reason to attend, as well as to learn from the many speakers and forums.

The Dayton Hamvention is generally considered the largest hamfest in the world. It takes place each May (formerly at the Hara Arena in Trotwood, Ohio, near Dayton) at the Greene County Fairgrounds and Exposition Center in Xenia, Ohio. Hamvention offers forums, exhibit space, and a flea market. Average attendance is around 25,000; there were 28,417 visitors in 2018. Many amateur radio enthusiasts go out of their way to attend the Hamvention, traveling from all over the United States, Canada, Mexico and various parts of the world and even to Australia, Japan and Russia.

The second largest festival in the world is the Orlando HamCation in Orlando, Florida, with more than 23,000 visitors a year and 74 consecutive years. Smaller regional hamfests include the 60-year-old Shelby Hamfest in North Carolina, which receives 5,000 to 7,000 visitors per year, Huntsville Hamfest in Alabama, Ham-Com in the Dallas area, and SEA-PAC in Seaside, Oregon. Hamfests can also be as small as a few hundred local attendees.

The largest festival in New England (and the Northeastern United States) is the New England Amateur Radio Festival, commonly known as NEAR-Fest, which takes place twice a year, May and October, at the fairgrounds. of Deerfield in Deerfield, New Hampshire. Deerfield is located approximately 15 miles (24 km) east of Manchester on Route 43.

In Western Australia, the largest Hamfest is run by the Northern Corridor Radio Group. The first were held on the former Carine TAFE College site. After its closure, its hamfests were held in Bassendean, a suburb of Perth.

The International Amateur Radio Exhibition known as HAM RADIO in Friedrichshafen, Germany, is the largest and best-known hamfest in Europe (17,080 visitors in 2015), which includes a trade fair and “youth days”. The first HAM RADIO took place in 1976 with 62 exhibitors.

In India, Hamfest has been popular since 1991. In 2009, it was held in Bangalore, alongside the Golden Jubilee celebrations of the Bangalore Amateur Radio Club VU2ARC The National Institute of Amateur Radio held two amateur radio conventions, mostly forums. in Hyderabad in recent years, uniquely linking events with major DX expeditions, allowing foreign radio amateurs to operate from the rare locations of Andaman I and Lakshadweep I.

Japan, the leading source for new commercially manufactured ham equipment, hosts at least one major annual festival with attendees from around the world, the famous JARL Ham Fair.

Hector Alvarez, in 2010, ventured into the 6-meter band, developing for activity in that band, a double 5/8 Vertical antenna with ground planes, which comfortably covers from 50 to 54 Mhz. This antenna was a revolution in Argentina given its extensive bandwidth, high reception sensitivity and excellent transmission performance.

The Antenna is a Ringo Ranger type of VHF, improved that covers the entire band, and manufactures it by hand, it is an excellent option for those colleagues who want to have an antenna of national Argentine manufacture, high performance at a reasonable cost, since the antenna material that enters the country of Argentina for that band is very scarce. It is a long antenna with excellent performance.

We say goodbye with a photograph of Mark Melzi, who accompanied me to the Radio Fair and took the photographs, Mark is LU3DU, better known as LU7CAW, at the door of the Radio Club Buenos AIres, where the Radio Fair was held in Buenos Aires, Argentina.

I hope you have enjoyed this report, which shows you what a Radio fair is like in Argentina, South America. I say goodbye until the next trip!! 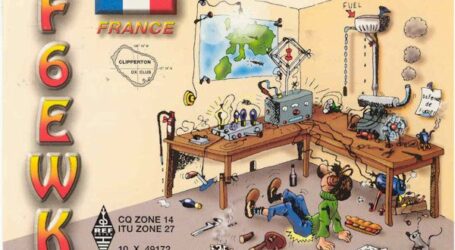