This year is an important year for Adventist World Radio. It is the 30th anniversary of our first broadcast from a 250 kW Marconi shortwave transmitter located at Radio Trans Europe near Sines (SEE-NESH) in Portugal. In this edition of Wavescan, we continue with another episode in the very interesting story of shortwave broadcasting by the Seventh-day Adventist denomination; and on this occasion, we are in Asia.

The very first Adventist broadcast on shortwave in Asia took place in October 1937 with a series of programs in the 49 metre band over station VU7MC in Mysore, India. These broadcasts were a short series of lectures on the care of poultry presented by an American professor at the Adventist college in Bangalore.

Radio station VU7MC began as a 30 watt unit in the home of a university professor, though later a 250 kw transmitter was imported. The broadcasting station VU7MC began as an amateur operation and it was on the air for a period of eight years before it was taken over by the state government of Mysore. The princely state of Mysore was later absorbed into the Union state of Karnataka, and the station VU7MC was ultimately replaced by local mediumwave stations as part of the network of All India Radio.

In April 1950, the shortwave station in the Portuguese colony of Goa began to carry the syndicated American program, “Voice of Prophecy”. Broadcasts of this program ended on the last Sunday in December, though the station carried other Adventist programming for another couple of years. Radio Goa at the time was on the air with just the one transmitter, a 1 kW unit on 9610 kHz under the colonial Portuguese callsign CR8A. This station left the air when Goa was absorbed into India as a Union territory.

Eight years later, two other stations in Southern Asia inserted Adventist programming into their shortwave schedules. One was the Burma Broadcasting Service in Rangoon, 50 kW in the 25 metre band, with the American “Voice of Prophecy”. Burma is today Myanmar (mee-AN-mar), Rangoon is Yangon, and the shortwave service has been increased with the installation of several additional transmitters at 50 kW.

The other station in 1958 was Radio Nepal in Kathmandu, 5 kW in the 41 metre band, with a new health program, “Your Radio Doctor”. The transmitter base at Jawalarkel (j’WAH-le-KELL) contained two Australian made shortwave transmitter at 5 kW though this facility was subsequently closed when a larger facility was constructed out beyond the edge of the capital city. For a short period of time each year, Jawarlekhel was re-activated to keep it air-worthy for use in an emergency.

Adventist radio programming on the Voice of the Maldives was introduced in 1967, when this station was on the air with a series of locally-made low-powered shortwave transmitters. One of these units carried an External Service for coverage into India and Sri Lanka though it was always hard to hear. The shortwave transmitter on 4740 kHz was listed with 30 kW though in reality it was operating at just 7.5 kW.

Beginning in 1969, Radio Afghanistan carried a local translation of the health program, “Your Radio Doctor” in the two national languages, Dari and Pushto. These broadcasts were part of the programming from Radio Afghanistan which was on the air with two channels in the tropical shortwave bands, usually at 50 kW and 100 kW. The main base at Jakatut (YUCK-a-TUT) was destroyed later in revolutionary fighting.

Radio Bangladesh also carried a locally produced program in the Garo language in 1979 and this was also heard on tropical shortwave. These programs were on the air at the time from two locations, both quite low powered. The older transmitter was located in suburban Dacca and the other was on the outer edge of Dacca.

Then finally the comparatively new station NYAB in Thimpu, Bhutan broadcast with low power on shortwave the translation of “Your Radio Doctor” in two local languages. In those days the radio station in Bhutan was operated as a volunteer service by the National Youth Association of Bhutan. These days, Bhutan is on the air with several transmitters, FM and shortwave from a new building in the same locality. 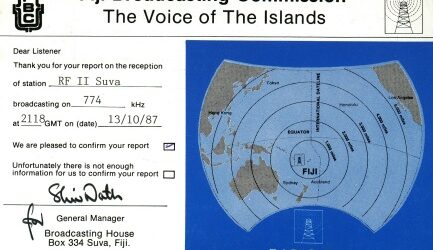