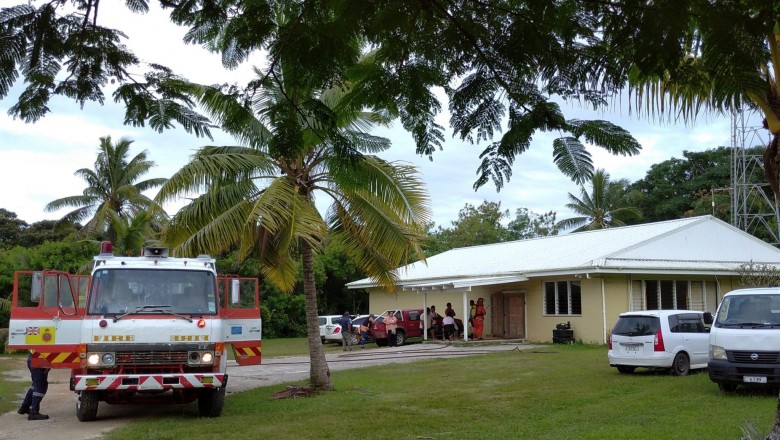 An early morning fire at the Broadcasting Corporation of Niue has destroyed the studios inside the building.

A radio announcer who arrived at the office for her early radio morning show found the studio rooms and the TV Operation room engulfed and raised the alarm.

Firefighters arrived at the scene after 6 this morning and managed to contain the fire inside.

The TV studio and editing room have been badly damaged by the fire.

The radio studio has also been affected. The library and archives are intact but smoke and soot had infiltrated the room.

The Fire and Rescue Services are still at the scene and investigations will continue. It’s suspected that the fire was caused by faulty electrical wiring and would’ve started sometime in the early hours of the morning.

The BCN news team have relocated to one of the offices at the Emergency Operations Centre. The technicians and camera crew are trying to determine what equipment if any can be salvaged from the building.

BCN General Manager Trevor Tiakia is still at the scene trying to assess the damages.

The fire could not have happened at a worse time when Niue is in the middle of an election to be held on Saturday 30th May.

BCN had started an extensive news coverage and were to start a televised Q and A segments to begin tomorrow both on Radio and TV Niue. TV Niue and Radio Sunshine have suspended services until further notice.

Over 1 million dollars’ worth of damage has been estimated for the Broadcasting Corporation of Niue building at Fonuakula.

On Tuesday May 19th, an early morning fire broke out inside the building which destroyed the TV Niue operation room and studio.

Only the radio studio and editing room were not damaged by the fire but were affected by the smoke and thick soot.

General Manager Trevor Tiakia said he has presented the report on the fire incident to the board of BCN.

“We’re working on getting equipment from New Zealand to enable us to operate one channel free to air for the meantime. “

The General Manager said getting radio up and running is a priority that the technicians are working on.

“We’re trying our best to cover the General Election in our news programmes, for now the news team is utilizing our online platforms. Livestreaming on the day of the General election is an option if we ‘re not able to get all needed equipment to broadcast.” said Tiakia

Investigation by the police and Fire and rescue department continue into the cause of the fire.

This material remains © TVNiue and is only to be used for non-commercial personal or research use. Any other use requires permission of the copyright holder.