Theme: create your own ‘radio art’ inspired by both the ‘Art of Radio Japan Exhibition and the role radio plays in your life.

Age: up to 15, resident anywhere in NZ and with parent or guardian consent.

Entry: entry is free. No entry form is needed. ‘Radio art’ can include painting, drawing, sculpture, digital design, photograph, audio [such as CD], video, ‘mixed media’ or whatever catches the imagination.

Best entries feature in an on line exhibition at radioheritage.com.

Scans of newspaper articles from the St Louis Post Despatch are now available.

The Suggestive Sounds of WVUG Anchorage

At WVUG we had the full supply of AFRS transcriptions, plus whatever the mails brought us from Headquarters. Back in those days we had music that was recorded for the military programs but never released commercially. How I wish I had access to some of that music today!  > read more

Some 65 years ago, in early 1941, KRB radio began broadcasting from Sitka, Alaska. This was the unofficial birth of the soon to become global Armed Forces Radio Service.

By 1946, it’s reported that 16 AFRS stations were on air across the Alaskan Territory, many in isolated outposts along the Aleutian island chain…  > read more

I am honored by your request about how/when I built and operated WVUV before it had a “call sign”.

During early 1942, the Navy sent a sono buoy system to Samoa to guard the entrance to Pago Pago Harbor with instructions that only I, a Navy technician, could read the “top secret” technical manual…  > read more

During the era of World War 2, many restrictions were placed upon us as citizens of Australia. There were shortages of gasoline and clothing and food, all of which were rationed for various periods of time. I was a little taller than many other lads my age and so my parents were granted a double allowance of clothing coupons for me.  > read more 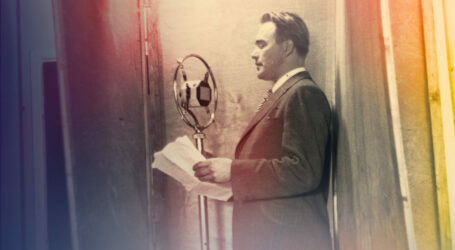