Steve says ‘I’ll be visiting over 20 of Australia’s most committed vintage radio enthusiasts and viewing over 2500 receivers’ and will also interview on camera several of the remaining original designers and manufacturers.

Behind Secret Walls And Doors

Everything vintage radio enthusiasts have ever wanted to know about Australian vintage receivers, their designers and manufacturers and about Australia’s secretive top collectors will feature on the double DVD collection. Behind the walls and doors, collectors will open up their secrets, point out their favorites, explain the details of rare models, tell tales and give you the tour you can’t afford to miss!

Says Steve ‘I’ll cover the rise of vintage radio collecting in Australia, the glory days of the 1990’s Super Auctions, and take viewers into the homes of the top collectors in Australia today. This is access that’s taken me years of negotiation to arrange, and you’ll never see anything like this anywhere again!’

Join Steve on his journey into the heartland of Australia’s vintage radio history and register your no obligation interest today in obtaining your copy of this exclusive double DVD collection.

Steve is a guru about Australian vintage radio. He once moved into a new home along with 31 tonnes of vintage radio parts and 4500 vintage receivers. He says he’s travelling light on this journey, but you can bet he’ll have some great stories to share afterwards! Enough to fill two DVDs for you to enjoy.

Order your set of Steve’s Australian vintage Wireless Medallions and see full color images of the entire set. Only 300 ever produced and only a limited number still available and now at our new special price for supporters of the Radio Heritage Foundation.

For easy access to daily news about the Pacific region, we’ve added some useful links on the left hand menu. These include RNZI and Radio Australia, both of which also include audio streaming links. Pacific Islands Report from the East West Center in Honolulu gathers the best of daily news from around the region and has many useful links to other Pacific media.

Stars & Stripes covers events in the Asia & Pacific region for a US military audience.

Critical Distance and its associated blogs ‘Critical Distance Weblog’ and ‘What Caught My Eye’ by Dutch based media guru and Radio Heritage Foundation board member Jonathan Marks also offer a unique view of Pacific region broadcasting issues from a global perspective.

We’ll be regularly adding more news and radio broadcasting industry links from around the region and hope you’ll find them useful.

US Forces Broadcast Over 4QR Brisbane

During late 1943 and early 1944, a small detachment from the radio section, US Special Services produced programs for American forces and Australian civilian listeners over 4QR Brisbane.  > read more

It’s 40 years since ‘pirate’ Radio Hauraki took to the New Zealand airwaves, and to celebrate, we’ve got one copy of ‘The Shoestring Pirates’ by Adrian Blackburn to give away. [Valued at US$90].

Just tell us the title of the first song played when ‘pirate’ Radio Hauraki was ‘born’ in 1966. Hint, it’s got two words, the second of which is ‘free’ and is the title song to a movie of the same name about a lioness that was a big hit for Matt Monroe in 1966.

Dear Folks:
Here’s the longer letter I promised you in a V-Mail a few nights ago. Have a little news this time, too. Will get to that later.

Well, Monday is Christmas, and we have big things planned for the holidays. The festivities will start Sunday evening when we throw a big “Studio Party”.  > read more

The radio section of Special Services Division of United States Armed Forces in the Far East [USAAFFE] was organized in November 1943, at Brisbane, Australia, under direction of Capt. Hal Berger and Capt. [later Major] William Tidwell. Its first task was distribution of transcribed radio programs to Australian stations of the Australian Broadcasting Commission and independent stations for rebroadcast to the Australian public and American troops in that area.  > read more 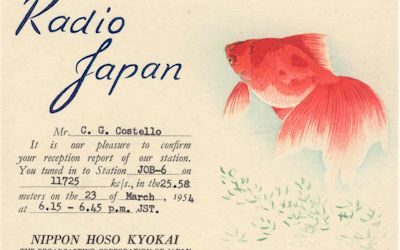