In this edition of Wavescan, we look at the full story of Westinghouse shortwave broadcasting by KDKA, at its six different locations over a period of nearly fifty years.

It was in August 1916, that Frank Conrad obtained a licence as an amateur radio operator with the callsign 8XK. He built his own equipment and installed it on the top floor of his garage in Wlkinsburg, in suburban Pittsburgh, Pennsylvania. All amateur licences were suspended in 1917 though Conrad was granted a special licence as 2WM for government experimental work during World War 1.

The ban on amateur radio was lifted on October 1, 1919 and two weeks later Conrad was on the air again, with music broadcasts from his station 8XK. One year later, his amateur music broadcasts were noted in the local newspaper.

During the war, the station with a special licence at the Westinghouse factory was designated as 2WE; and in the early part of 1920, Frank Conroy, took his amateur station 8XC to the factory for a special demonstration. Out of these events with Conrad & Conroy, grew the concept of establishing a radio broadcasting station at the factory which was licenced initially as 8ZZ.

The notable date for the launching of the new mediumwave station, now known as KDKA, was November 2, 1920. This same program was relayed on shortwave by Frank Conrad from 8XK in his suburban garage as a back-up precaution.

Two years later, a 1 kW shortwave transmitter was installed at the factory in East Pittsburgh under the callsign 8XS; and two years later again, the mediumwave and shortwave units were moved out to a new facility at Forest Hills, where the shortwave callsign reverted back to the more familiar 8XK.

However, in 1931, both KDKA & 8XK were moved again, this time to another new facility at Saxonburg, another suburban location within Pittsburgh. Here it was that the callsign was regularized in 1939 to the four letter callsign, WPIT. By this time, four shortwave transmitters were in use for the broadcast of the Westinghouse radio programming.

Right towards the end of the year 1939, the final split came between mediumwave KDKA & shortwave WPIT, with the transfer of KDKA to another new location again, this time Allison Park in Pennsylvania, and the transfer of WPIT to Hull in Massachusetts. Production staff and studios for the shortwave service were re-located some months later to the home of another Westinghouse mediumwave station, WBZ in Boston.

However, during the following year, the other Westinghouse shortwave station, WBOS was transferred from Millis near Boston, to Hull, which is located right at the end of a narrow peninsula opposite Boston. Here it was that the equipment of both stations was integrated and the WPIT callsign was dropped, with the usage now of only the one call, WBOS.

For a period of twelve years, station WBOS in Hull carried VOA programming to Europe & Africa. When this term of service was over, the equipment was sold and transferred to shortwave station WRUL which was located further down the coast at Hatherley Beach, near the town of Scituate (SIT-you-ate).

There was a disastrous fire at station WRUL in 1967 in which all of the World War 2 equipment was destroyed. This then would mark the final end of the historic shortwave station, 8XK-WPIT, after nearly half a century of international radio coverage.

As a postscript, station WRUL in Scituate became WNYW, and then it was bought by Family Radio and re-designated as WYFR, which is on the air these days with fourteen shortwave transmitters at Okeechobee in Florida. 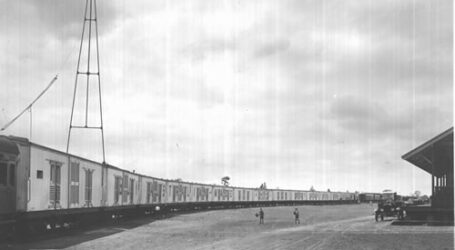 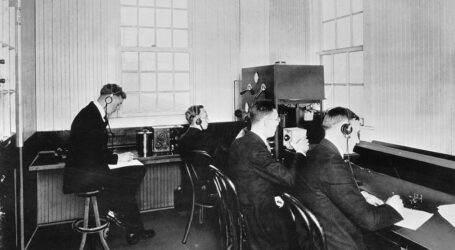 KDKA takes to the air on the evening of Nov. 2, 1920 with a program of election return reporting interspersed with recorded music. Announcer Leo Rosenberg is second from right in this Westinghouse publicity photo of the broadcast. R. S. McClelland on stool served as a “standby.” Also shown are William Thomas, the licensed transmitter operator, and John Frazier, the telephone line “operator.” (Getty Images)
November 4, 2020
Comments: 0