The first radio broadcast from the League of Nations was presented on an experimental basis and it went on the air in February 1929. The programming was produced in a studio in Geneva and it was fed by landline to the popular international station PCJ in Holland for worldwide dissemination on shortwave.

As a result of the success of the series of broadcasts from radio station PCJ, plans were laid for the construction of a radio station specifically for the broadcast of programming from the League of Nations. This new shortwave station was located at Prangins, near Geneva, and when completed, it contained two shortwave transmitters at 20 kW.

Radio Nations was organised in 1929 and the new shortwave station was opened for communication traffic in February, 1932. Seven months later, Radio Nations was taken into usage for regular program broadcasting with coverage in Europe and North America. Subsequently, additional programming from Radio Nations was beamed to the Far East and Australia.

Initially, the programming format was quite brief, consisting of short 15 minute segments in three or four of the major European languages just once a week on Sundays. However, as time went by, program broadcasting became quite spasmodic, and was actually deleted for a period of time.

Early in the year 1939, the broadcast outreach on shortwave was revived with a presentation in the same format as was noted previously The last broadcasts from Radio Nations that were reported in contemporary radio magazines were heard in December 1939.

Radio Broadcasting from the League of Nations

Radio Broadcasting from the League of Nations 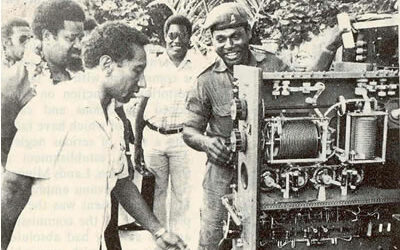