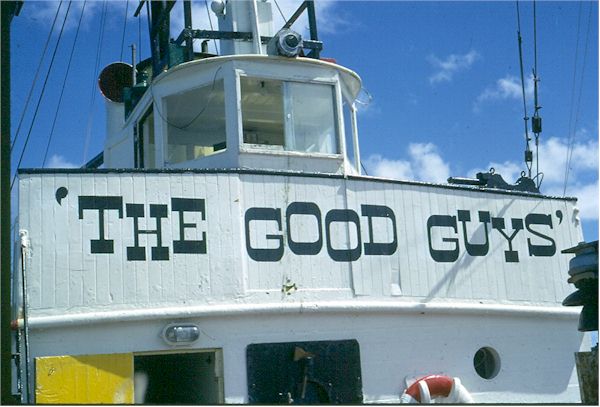 Brian Withers sends in a nice item of memorabilia – one of the early audience listener cards sent from the station to confirm reception.

Tiri I On Slipway

After going aground on rocks on Great Barrier Island, the old Tiri is towed back to Auckland and slipped so that assessors can view the damage. January 1968.

Announcer Ian Johnston prepares for another shift in the studio aboard the Tiri II. 1969.

Technical Director Denis O’Callahan and Technician John Tremain working on the transmitter in the hold of the ship. 1967?

An attempt is made to pull the Tiri II off Uretiti Beach near Waipu where she had been driven ashore during a severe gale. June 1968.

David Gapes watches the newly acquired Kapuni, about to be renamed Tiri II, move quietly away from the wharf and make her way to the slip at St Mary’s Bay. February 1968.

Colin Broadley and a supporter tighten one of the guy wires holding the new steel aerial. February 1968.

An aerial view of the Tiri II with Great Barrier Island on the background. 1969

The Tiri II bridge and wheelhouse.

Tiri II Gets Coat of Paint

Whenever the ship was slipped there was an opportunity to clean the hull and slap on another coat of paint. 1969.

After being converted into the pirate radio ship, the Tiri II is about to receive a brand new steel aerial. February 1968.

Tiri II (real name Kapuni) on the mooring in the Hauraki Gulf. 1969.

Bill Gibbs in his Maurauder pulls alongside the Tiri II as the crew wait patiently to head to shore. 1970.

This website is not affiliated with the current Radio Hauraki owned by The Radio Network.
The original pirate Radio Hauraki was realised by David Gapes, Denis ‘Doc’ O’Callahan, Derek Lowe and Chris Parkinson and owned by Pacific Radio Advertising Ltd.
Material from this site is part of the Radio Heritage Foundation Archive, which holds all © unless specified. 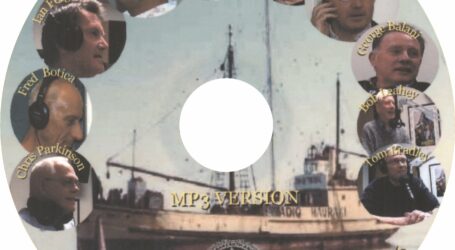