Standing in the small, cluttered producer’s box peering through the flexi-glass at the ZM Morning Crew’s Grant Kereama and Pauline Gillespie nonchalantly chit-chatting into their fluffy, red microphones is an unusual experience. Meeting them is much the same.

Radio jocks are commonly adored by the young and dismissed as egotistical loud-mouths by the older, intellectual elite. Kereama and Gillespie would almost epitomise this mould if they weren’t so down-to-earth.

After 15 years of 5am starts, the popular duo are by no means disillusioned with their status as New Zealand’s most established breakfast show partnership. One might even claim them to be the Richard Long and Judy Bailey of radio, or at least a modern-day Sonny and Cher, minus the flares, fights and face-lifts.

Their journey began in July 1991 and has included consecutive New Zealand radio award wins in 1998-99.

“It’s just a great gig,” Kereama admits, rubbing his shiny shaven head. “There can also be a lot of pressure. But I like it when it’s really busy, where you are flying by the seat of your pants having to perform on a whim. I love it.”

Gillespie agrees, flicking her long dark locks out of her face as she speaks.

“It really is good fun. I mean it’s not a party everyday, much like being a jet pilot. I’m sure there are days when pilots and say ‘I can’t be assed flying today’. Though admittedly there may be less at stake.”

Citylife pays a visit to the contrasting faces of radio, the hugely popular Morning Crew at ZM and the niche carved out by World FM in Tawa and Massey University’s Munt FM.

Watching them live it’s hard to believe they might need to try to be funny. Whether discussing the ramifications of Mel Gibson’s latest booze binge or taking punts on what was voted the world’s most recognisable brand (it was Coca-Cola by the way), they exude an irrepressible natural boisterous charm.

A preposterous, boisterous charm at that, if the gift basket perched idly on a nearby desk is a hint. Producer Marc ‘new hot guy’ Peard and assistant producer Cam Bisley say the team is accustomed to receiving gifts of such nature from companies hoping to gain a favourable on-air plug.

“It’s pretty tough these days for a company gift to impress us. Perhaps sending a small African child would be an original step but a hamper won’t work, it’s been done before,” Peard quips.

Not that they mind being showered with presents. Bisley, in particular, enjoys getting muffins. And with Kereama and Gillespie recently signing on for another five years, there should be plenty more muffins for the taking.

A tiny Wellington radio station is flying the flag high for Kiwi music to a regular audience from as far afield as Brazil, Austria and the Czech Republic, despite only having a broadcast range of a few kilometres. MUNT FM Station Manager Matt Hall says Wellington’s hills and a minute 500 milliwatt transmitter combine to limit the Massey University station’s range to four or five km so the station also broadcasts on the internet. The MUNT Demo Pledge is to play every demo sent to PO Box 756, Wellington. The station has to date received more than 150 demos from around the world. Mr Hall says about 95% of the demos are brilliant, “especially the local stuff.” Interested listeners can tune in to MUNT FM on 88.5fm or listen online and view timetables, events and competitions at www.muntfm.co.nz. There are currently vacant timeslots available for anyone interested in being a DJ. Email Matt at

Pop band Buggles may have declared that video killed the radio star, however the internet and low-cost electronics may well bring them back.

Radio transmitters and aerials costing about $1000 enable budding radio programmers to become legends in their own living rooms.

Broadcasting to neighbours and anyone who drives within about four kilometres of their house, operators of low powered radio stations are often the fringe of fringe radio.

Some try to emulate mainstream formats while others just go for it, serving up whatever music and banter the person at the controls sees fit to offer.

World FM is the baby of Chris Mackerell. It operates out of his rather untidy spare room.

It plays a mix of sydnicated shows from offshore radio stations and Kiwi Music.

As the name would suggest the emphasis is on world music, with blues, folk and news shows thrown in for good measure.

It’s essentially shows that Mr Mackerell has been listening to and downloading off the internet for years.

About 18 months ago he decided to share his eclectic tastes.

The amateur electronics whiz even built his own transmitter from a kitset.

He says in Wellington there are many low power stations battling it out in a small section of frequencies.

“You have to fight it out among them.”

Aside from the experience of building his own transmitter Mr Mackerell says running World FM has helped him make friends and contacts across the globe.

“I’ve also learned a lot about how the broadcasting industry works in New Zealand.”

● Unlicensed radio stations operating in a narrow band at the top and bottom of the FM radio dial.

These articles originally appeared in the northern suburbs edition of the Wellington community newspaper Citylife (published by Capital Community Newspapers) on August 9, 2006. Scanned from a copy held in the Radio Heritage Foundation archives: 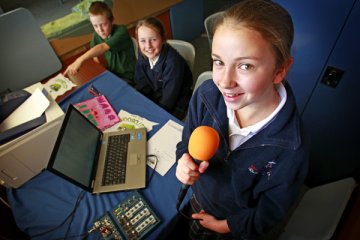 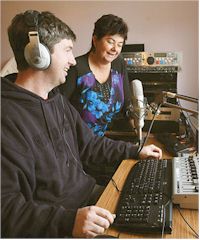