Ace up the sleeve

Raglan is a coastal town in New Zealand that’s famous for its surf breaks and volcanic black-sand beaches (writes Carolina Abbot Galvão). Rumour has it that if you catch a wave on Manu Bay, you can cruise on it for 2km – if you’ve been practising, that is. But according to Aaron Mooar, who manages Raglan’s community radio station, there’s actually a lot more to the town. “It’s unique in other ways too,” he says. “There are a lot of interesting organisations doing new things here: our community recycling centre was among the first of its kind. We also have a thriving arts centre.” Below, Mooar tells us about Raglan’s latest news, forthcoming events and the town’s music scene.

What’s the big news this week?
There’s some controversy around the sewage system here. People want land-based sewage instead of it going out to sea. Most of the community here is very environmentally focused, so people would like to see that. Also, decades ago when the council got a town sewage system, they decided to put it on a piece of land that was sacred to Māori people, so it’s particularly offensive to them. To be honest, the situation is kind of a microcosm of New Zealand’s issues.

And what kind of music do you play?
The vibe is anything goes, really. DJs get to choose what they play, so we have everything: a grandmother who plays country and gospel, people who play the hippest music possible, as well as some guys who like to play blues, jazz, and drum and bass.

Do you have a favourite broadcast moment?
We have a community day here called Māori Dolphin Day. I think there are only 50 members of the species left on the coast here, so we celebrate them by having a recycled raft race in the harbour. This year, we took our studio down there for the first time and broadcast the event from a little tent on the sand. We really enjoyed that. 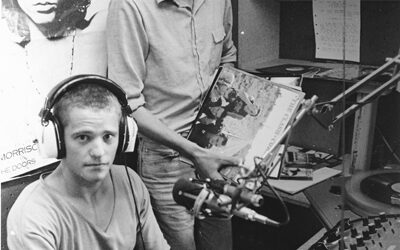