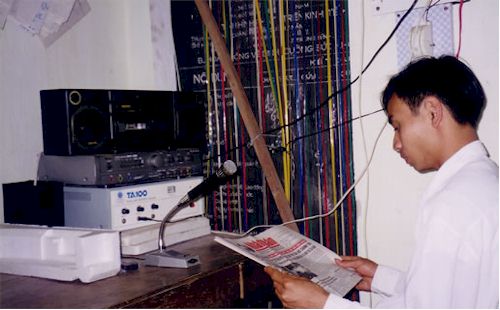 I first visited Vietnam in early 1997, working for the Australian Broadcasting Corporation on an aid project to help modernize radio there. On my first morning in Hanoi, I was awoken in my hotel room on the dot of 5 a.m. by what sounded like a brass band in the street below. I went to the window. It was still dark, and not a soul was around. The music continued, and after a few minutes there was an announcement. Though I couldn’t understand Vietnamese, what I was hearing was unmistakable – a radio program. Did somebody out there have a radio turned up really loud?

Later, I found that this was community radio, Vietnamese style. There were loudspeakers on the power poles, and radio came through what was effectively a public address system. This had originated in the old days, around the 1950s, when Vietnam was very poor, and few people could afford radios. The government wanted the people to be well-informed, so thousands of villages in North Vietnam set up these local radio systems. According to the evaluation report from another project I worked on, Vietnam in 2004 had 61 provincial stations (mostly TV and radio together), 601 district stations, and 10,000 commune stations. Obviously the last number is a rough estimate; I’ve also seen a figure of 7,000. Assuming the truth to lie somewhere within that range, that’s a vast number of radio stations: about one for every 8,000 people.

The smaller the scale of a station, the less local programming it generated. The local stations were on air generally for just a few hours a day, with the morning session starting around 5 or 6 a.m., and the afternoon session around 4 p.m. When I visited some local stations, I was surprised to find how minimal they were. A local station normally occupied one room in the local town hall.

By the late 1990s, almost all households had radios, and people living away from the village centre, out of reach of the loudspeakers, could listen on their transistor radio. But also, by then, most households had TV sets, and the level of radio listening was probably declining.

Did people object to compulsory radio listening, through loudspeakers? It surprised me that they didn’t seem to mind. Some of our surveys included a question that made it possible for people to indicate that the loudspeakers bothered them – but without putting words in their mouths. (If you are thinking that Vietnam is a communist country, so people wouldn’t be honest with anybody working with the government… well, that’s what I thought too – before actually meeting the people, who turned out to be not at all backward in criticizing officialdom.) In a village I visited, interviewing people in their homes through an interpreter, only one man reported that the loudspeakers bothered him. That was hardly surprising, because a speaker on a pole was right above his house. Sound insulation was never a design requirement for traditional Vietnamese houses, whose many small gaps let cooling winds through in summer, but are no defence against massive loudspeakers.

At the time I was working on a Swedish aid project, through the Media Development Office of Swedish Radio. Several of us westerners took a trip to a village in the hills, a few hours by rough road from Yenbai. The village lay timelessly in a beautiful valley and we agreed that we’d be very happy to live there ourselves, specially in a traditional thatched house.

The electricity supply hadn’t reached the village – so there was no loudspeaker system. Most households had radios, but they were enterprising people, and didn’t rely on batteries. Many of them had installed small hydro-electric generators to light their houses and run their radios. The water to power the generators – which looked rather like outboard motors – flowed through their rice paddies, dropping about one metre from one paddy to the next, so not a lot of watts were generated. In one house we visited, they had won a colour TV, but couldn’t use it. Their generator produced enough power to run either their small black and white TV, their radio with cassette player, or their 25-watt light bulb, but only one of these at a time.

A retired man in that village, who’d spent all his life working with the Voice of Vietnam (the government radio system that we were helping) lived in the house pictured. He told us how the main Yenbai radio station had escaped bombing during what they call the American War. On the far side of Yenbai was a lake, on which was a hilly island. Inside that island was a large natural cave, and in the late 1960s and early 1970s, the radio station had operated from there. The staff had lived in the cave, dimly lit by a string of low-wattage lights, and the transmitter had been hidden in the trees that covered the island. The man had a haunted look, with incredibly sad eyes, which I’d also noticed in other Vietnamese men. I didn’t like to ask about this, but an interpreter told me later that after they had seen many people die in the war, some people never lost that sorrowful expression.

Though I never came to understand spoken Vietnamese (defeated by the six tones, which completely change the meaning of words), it was easy, as an experienced radio listener, to detect the type of program being broadcast on local radio. News bulletins, weather forecasts, local children’s choirs, local radio plays, occasional advertisements, and earnest spoken-word programs were all clearly distinguishable.

There was just one genre that puzzled me. It appeared only on network stations: a brief program, usually straight after or before a news bulletin, chanted rather than spoken, with much repetition, and a frequent word that sounded like “ching ching”. Eventually I found that this was a recitation of the programs to be broadcast that day, on each station in the network. “Ching ching” (actually “chuong tr”nh”) simply meant program. Because, above all, radio in Vietnam had programs – not the endless flow of music, announcements, and brief news that now fill western airwaves.

Most of the time, each local station had a local announcer, who often interviewed other people from the town. But with the local station right there in the town hall, the local mayors sometimes used the stations to make speeches, encouraging the villagers to act in some particular way, often in a sweetly persuasive voice, like a father to a wayward child, as if to say “Now wouldn’t it be a good idea if you just did this…” The local announcers varied greatly in their approach: some sounded very matter of fact, while others (specially younger men) were clearly going for a DJ sound, perhaps hoping for promotion to a big city, to get away from that boring little village.

Dennis List is an Adelaide [Australia] based social psychologist with Audience Dialogue, a media consultancy specializing in media research.

Since the 1970’s, he has worked in audience research, including Audience Research Manager for the Australian Broadcasting Corporation [1989-1998] as well as many client based projects for broadcasters in SE Asia, the Pacific and Africa.

Dennis also lectures in Marketing for Electronic Business at the University of South Australia, and has authored books such as ‘Know Your Audience – 2001’ and ‘Participative Marketing for Local Radio’. He currently has major research interests in futures studies – especially relating to radio broadcasting.

In Good Morning Hanoi, Iain Finlay and Trish Clark, two of the founders and producers of the international television program Beyond 2000, return to a country from which they reported during the Vietnam War.

They find an extraordinarily friendly people whose resilience and irrepressible good nature enable them to put the past behind them and move into the future with confidence.

Coming to Vietnam as volunteers for an Australian aid agency, their intended role is to coach and instruct, or at least to share their knowledge with a small group of reporters. But they find that they learn more than they teach.

Published in 2006 by Simon & Schuster Australia, Good Morning Hanoi is a great read for everyone interested in how a government controlled radio network in one of the last communist states is changing to meet the demands of a new era of transparency in a new Vietnam.

Read more about Iain and Trish’s experiences here at radioheritage.com in their story Good Morning Hanoi.