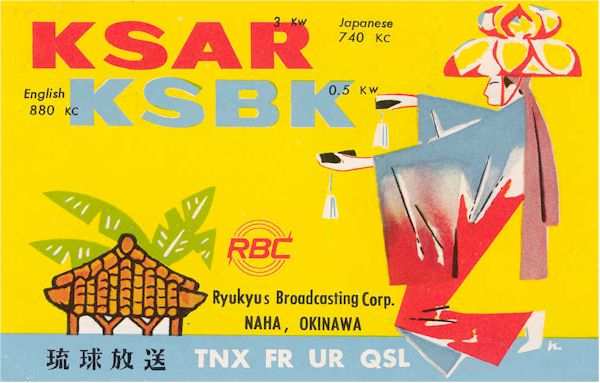 During the first decade of the American occupation of the Ryukyu Islands, the English speaking population listened to the familiar sounds of local Armed Forces Radio, part of the Far East Network [FEN]. By mid-1955, a civilian radio station was in advanced stages of planning, and in this uniquely frank letter to New Zealand radio enthusiast Merv Branks, the man behind KSBK explains his plans.

As I may have told you, the operators are not tycoons, so I’m doing ten jobs: planning, correspondence, sales, programs, program directing, production, writing, announcing, etc. I have no help yet and won’t engage any until the last week in Aug.

I’ll get KSBK on the air for less than $900, and the budget for Sept. is only $1,980, so it’s a really rough go. However, the bright side is that KSBK was much needed here. I’ve sold over $2,600 a month in billing from opening day. We have excellent business headed this way from the U.S. Sales are only limited by my personal capacity.

No stranger to the Orient I. Frankly, I’m empire-building. While a Gov’t employee, I have my own private arrangement with the owners, 10% of stock is in escrow. In three to five years, if I can get gross billing on both stations and our planned TV setup, to about $50,000 a year, I’ll switch allegiance and become sole U.S. representative for the whole works.

Also in the organization stage is an advertising agency [a coverup for a house agency], with silk-screening, screen slides, photo-offset poster printing and neon signs.

I think the day will come when Okinawa will be declared a free port like Hong Kong, then the business potential here will have no ceiling. I haven’t met one other person on the island who knows the least about advertising.

I’m even helping the newspaper sell in order to achieve peace with them, so we can travel in the same direction instead of spinning our wheels against each other’s efforts.

It’s terribly interesting, but a terrible amount of work. You’ll probably hear about our HIGH SCHOOL DAY promotion. I’m turning KSBK over to the American high school for one day.

Out of the ‘mess’, I’ll pick several youthful announcers, writers, musicians etc. at part time salaries for part time jobs. I can get 50% more work hours for 50% of adult worker cost that way.

A later teenage radio employee of KSBK was Art Bell, now a nationally known broadcaster for his ‘Coast to Coast AM’ radio show heard on many radio stations across the USA.

At one time, Art made the Guinness Book of Records with a 116 hour and 15 minute radio marathon from KSBK.

Thus, we’ll be able to leave our U.S. revenue on deposit against TV equipment purchases. TV is planned for one year, but maybe I can make it in less. My energy is the only limitation and I always feel wonderful when I’m working hard.

Once we’re rolling, I’ll have more time to send you the material you want. Right now, two sample scripts, three presentation letters and two late sales calls are waiting – also my taping for the evening show. Write again. Your letters are wonderfully interesting. Maybe we’ll see each other sometime.

I have an ambition to sail a Chinese Junk through the South Seas to America one day. You’ll be on the sailing list.