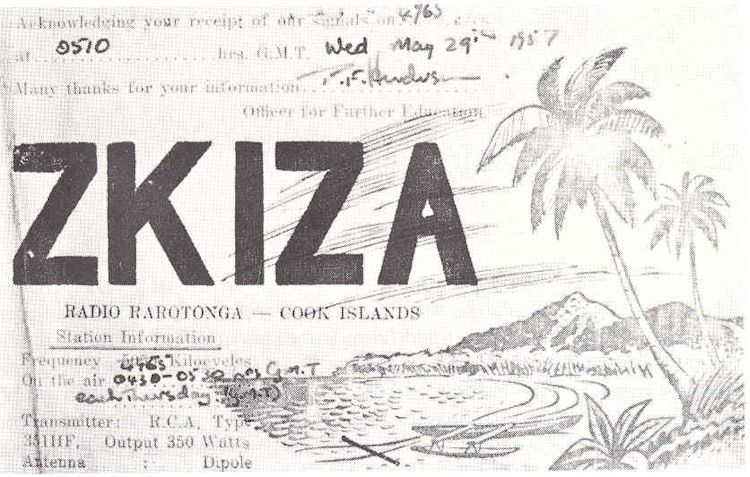 Broadcasting to the islands of the South Pacific was introduced in various ways. In the case of the Cook Islands, it was an educational radio station that started the interest in broadcasting.

During 1954 a station commenced operating from Rarotonga, when the New Zealand Government gave a gift of post and telegraphic transmitters and technical staff to commence an educational radio station.

The broadcasts were on an hourly basis on Wednesdays and Fridays, from 2300-2400 UTC, and later, on July 22, an entertainment transmission was added. The station used various frequencies including 1390kc, 5050 and later 6180kc.

It was on May 1 1957 that a frequency change from 5050 to 4954kc was made and the broadcast was on the air on Thursdays at 0230 UTC. The transmitter was used for telegraphic communication at other times.

At the same time, the New Zealand Government was pressed for a commitment to extend the operating hours, but they were reluctant to do so.

It was also suggested that a radio amateur who had a commercial licence could commence this service.

In the same year, the Cook Islands Broadcasting Service added new calls to its transmissions and extended its service. The former callsign of ZK1ZA was taken over by the new broadcast band transmitter on 820kc.

ZK5 was the new call on 5050kc and ZK3 on 9695kc according to the closing announcement of the station.

On March 21, 1981, still assigned the call ZK4, broadcasts were heard on 11760kc throughout the day with a relay of the mediumwave service and using a power of 500 watts. The transmission continued for some 10 years on this frequency until the transmitter building was destroyed.

Radio Rarotonga, in the Cook Islands, is to boost its power on three frequencies to 5kW shortly, and increase its program hours to cover morning, lunch hour and evening.

The station was established 15 years ago, when, at first, it used the Post and Telegraph transmitter at Rarotonga for its broadcasts to the Island territory.

The station started with a 30-minute program each week on the Post and Telegraph communications station. Later, station personnel built some transmitters and also used second-hand equipment from the New Zealand Broadcasting Corporation.

Weekends were spent in building their own studios, a large one for concerts and audience participation, and two smaller ones.

Radio New Zealand news is relayed at 0730 GMT in the evening service. The station plans to operate a breakfast session soon, to be on the air 1630-1930 GMT.

Nine members form the staff of the station. Mr Henderson is the only non-Cook Islander on the staff.

A short-wave broadcasting service commenced in 1954, and early in 1955, the transmitter was operating on 5050kc. The station, located at Black Rock [Rarotonga], is operated by the Radio Department, with material provided by the Education Department. There is a program of news and entertainment each Wednesday, commencing at 6.30pm and there are also some daytime educational broadcasts to schools.

As usual, there is also an unofficial history.

In 1944, a long wave aeronautical beacon transmitter at the RNZAF base at the Rarotonga airfield was unofficially modified to provide an entertainment service for New Zealand military personnel.