As the first Generation X kids were born in the 1970’s, early baby boomer parents still listened to ‘Music Whilst You Work’ on the National Program. Or partied to pop music from a commercial radio station – until midnight – when the stations mostly closed down and LP’s went onto the record player instead.

Only 6 radio stations in Auckland

Just 30 years or so ago in 1978, New Zealand radio listeners had only five or six radio programs to choose from if they lived in a large city such as Wellington or Christchurch, all but one operated by the government controlled NZBC. Slightly better choice in Auckland where there were three private stations, worse if they lived in a small provincial town, and much worse everywhere else.

Generation X parents were excited at this range of choice. Cliff Richard was hot. So were the Rolling Stones [but not on the YA stations] and Carole King was topping the charts. Only a decade earlier, pirate Radio Hauraki had started clearing the Kiwi air of government controlled radio with its list of banned records, and changes were still slow coming. The radio dial in late 1978 wasn’t much different from that in 1968 [or 1958 for that matter] except for the glacially slow return of private radio.

There were 69 separate AM transmitters broadcasting [this was well before FM] and the NZBC operated 57 of them. There were four Concert Program stations [in each of the main centers], sixteen National Program stations, 21 separate community stations, a collection of hybrid stations [combining either the Concert or National Programs with a nearby community station], the ZM stations [main centers excluding Dunedin] and odd one out, Apple Radio 2ZK in Hastings.

The National Program had only recently started broadcasting through the night, previously closing down after midnight. The community radio stations all closed down at midnight, although during the summer holiday period, they kept going with the ‘Tonight Show’ until 5am when the local Breakfast Shows began. Younger listeners to pop music on 1/2/3ZM were supposed to be safely tucked up in bed – with or without partners – when the stations closed down at midnight.

The NZBC expanded coverage in the 1970’s, meeting complaints about poor National Program reception in a number of places by installing ‘infill’ repeater stations in places like Palmerston North, Nelson, Alexandra and Queenstown. In some places, ‘hybrid’ stations were established that carried a mix of commercial and non-commercial programs, with 3YR Reefton and 3ZO Twizel as examples. In other towns, such as Tokoroa, there was a local studio, relays from Radio Lakeland in Taupo, and the National Program, all heard at different times of the day on the same frequency.

Apple Radio was ostensibly established to expand the Concert Program into the Hawkes Bay twin cities of Napier and Hastings, but the reality was an attempt to prevent private radio from getting established. Setting up a ZM station would have been too obvious. A similar move was made in Gore [Hokonui Country Radio] to head off a private station in Invercargill for as long as possible.

Ashburton suddenly had a hybrid station when Canterbury Broadcasting and Radio Avon tested the feasibility of a mid-Canterbury network of stations for Ashburton, Timaru and the North Otago town of Oamaru. Even Oamaru had an NZBC sponsored station for a scouting jamboree shortly afterwards, this station eventually becoming permanently established as 4ZW and sometimes relaying 4ZB Dunedin to make it economic.

Provincial Radio had audience ‘in the bag’

The community stations still kept a strong grip on most airwaves across the country, especially in provincial towns where they had no competition. They were centers of local entertainment, with events pouring out of studios, local theaters, A&P shows, home shows and beach sound shells over summer.

Selwyn Toogood stumped around the nation with ‘It’s in the Bag’ until the middle of the decade to continue traditions going back to the 1930’s. Everything from racing results to ‘Dr Paul’ and the latest ‘Hits from Germany’ as well as on air ‘trading posts’ or ‘Buy, Sell, Exchange’ could be heard on the one size fits all stations.

The flagship ZB’s however, started the 1970’s suffering under the growing assault from the private stations, despite the fact that the Broadcasting Tribunal tightly controlled private radio. Applications for new stations usually collapsed when tested against tough criteria set by government policies, opposition from the NZBC, and opposition from other potential or existing private stations.

Dunedin’s 4XD was the last remaining station of the original ‘B’ class broadcasters from the 1930’s and run by a non-profit association.

The original Christchurch Gospel Radio Fellowship ‘Radio Rhema’ station had been joined by a second station in Wellington in late 1978.

‘Turn Your Radio On’ to ‘Radio Avon 12-90 Christchurch City’

Many of the stations had fast become market leaders, the runaway success being Radio Avon, which had destroyed the 3ZB dominance of the Christchurch airwaves. The NZBC fought Radio Avon in 1978 by converting 3ZM into ‘Radio Nova’, attempting an early version of automated programing with a ‘Beautiful Music’ format somewhat similar to that of Radio I in Auckland which was having reasonable success in that market as ‘Easy Listening I’.

‘Nova’ [coincidentally ‘Avon’ spelled backwards] behaved like any exploding star, with a brief moment of listener interest before self destruction and reverting to the rock music played on siblings 1ZM and 2ZM. The automation gear now sits forlornly in a corner of a room alongside Vintage Radio 3XP at the Ferrymead Historic Park in Christchurch.

Radio Hauraki on a high wave

In Auckland, Radio Hauraki with its traditional pop music format was a reasonable ratings performer, and Radio I it’s long time rival from the late 1960’s [when it’s owners bought time on 1ZM] – and with an ‘easy listening’ format – was also popular, especially amongst females. A new station had just appeared on the dial in Manukau City as well, with Radio Pacific and its talk back format. But the NZBC flagship, 1ZB, sailed on with the majority of audience share built around the breakfast show host Merv Smith.

Blowing Up from the South

In Wellington, Radio Windy was ‘blowing your way’ and doing a good job blowing away chunks of audience from 2ZB and 2ZM. However, the difficulties of establishing a strong signal over the hilly metro area contributed to holding the station back from the sustained pre-eminence that Radio Avon enjoyed in the pancake flat Christchurch market.

In Dunedin, Radio Otago – fresh from successfully challenging 4ZB in the city – was planning an assault on the Central Otago heartland held by 4ZB’s partial repeaters in Alexandra and Queenstown. In Hamilton, Radio Waikato also had ambitious plans for a network of stations, in their case stretching from the Coromandel to the King Country.

At the same time, short term student radio stations such as Radio Bosom [Auckland], Radio Contact [Hamilton], Radio Active [Wellington] and Radio U [Christchurch] were struggling to gain the student audiences for a few weeks – later months – each year. Other temporary stations came and went along the AM dial and everyone involved with radio kept a wary ear for the stereo revolution that was now just a few years away with the introduction of FM radio.

Like AM radio in 1966, it would take another pirate station in Auckland to deliver music – for both ears this time – as Radio Auckland began illegal broadcasting in FM stereo to the city. The supporters of Radio Auckland [students and commercial radio interests] actually ran their first brief FM tests in 1975. FM – now, that’s another story.

For now, let’s take a stroll along the New Zealand Radio Dial in 1978 and revisit some familiar old names and call signs and continue to enjoy radio artwork from the period. The sounds of those times? They’re coming soon!

If you worked in Kiwi radio during the 1970’s or have memories, recordings, promotional items or ephemera of any of these stations, please do your bit to protect our radio heritage. Register them with us or let us look after them for you. Write to us or send us an email. Our social history is worth preserving.

For a comparison, see the New Zealand Radio Dial in 1931 and look at how many radio stations and different programs served Auckland almost half a century earlier. There’s no doubt that radio broadcasting as an industry had suffered immensely during the long 35 years of state control and was barely emerging from a moribund state as late as 1978.

For an introduction to the short-term stations permitted by the state as a safety valve [much like the LPFM stations of today], see Short Term Kiwi Radio Memories]and enjoy some of the stations that blazed a trail for new formats, new communities and new personalities.

Again, if you’ve got memories or memorabilia of any of these Popular Kiwi Radio stations, personalities, events or more, please do your bit for your country, and register them with us or send them to us to copy or to keep for future generations to understand and enjoy.

This feature is made possible thanks to Sally O’Donnell in memory of Paddy O’Donnell.
Paddy O’Donnell, popular radio broadcaster in New Zealand and Australia 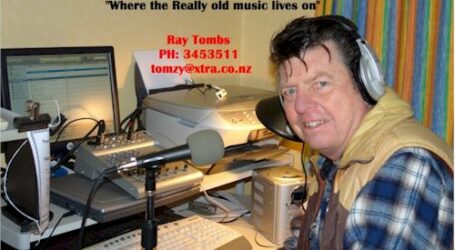