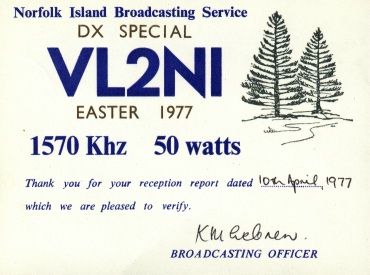 It’s ‘drivetime’ on Radio Norfolk, and down the road at the Burnt Pine shopping center, there’s a potential traffic jam when wandering cows block one of the exits from the Norfolk Mall. On this laid back little island, cows have the right of way. It’s especially distracting at the local golf club. More so when the perfect drive is found in a warm cowpat.

The DJ puts yet another purple coded album on the turntable, and the svelte sounds of a Jim Reeves ballad soothe the jangled nerves of the homeward bound commuters. All half-a-dozen of them.

Settled by the British in 1788, Norfolk Island later became a brutal penal colony for a 30 year period lasting until 1855. Remains of the Georgian style prison buildings are well preserved at Kingston, on Bounty Bay. A year later, the Pitcairn Island descendents of the famous HMS Bounty mutineers found themselves in a new home.

They brought with them their own dialect, drawing on Georgian era English and Tahitian, and many phrases have found their way into the local version of the English language. Radio Norfolk is the only radio station in the world to broadcast in this centuries old dialect.

Although governed as an Australian Territory, it’s not technically part of Australia. It flies it’s own flag, issues its own postage stamps, and is closer to Auckland, New Zealand (1100 km to the south-east) than Brisbane, Queensland (1500 km to the west). The official callsign for Radio Norfolk is VL2NI.

The permanent population is about 2000 people, boosted by several hundred visitors at any given time from Australia and New Zealand. It’s popular as a holiday destination for ‘the newly wed and the nearly dead’ which is rather unfortunate, as it’s a relaxing and charming subtropical island with a unique mid-Tasman lifestyle.

Radio Norfolk serves them all with an eclectic mix of music and local talk that meets local needs. In various guises, Radio Norfolk has been broadcasting since 1952. It now operates more or less independently of Australian broadcasting laws. It’s licence forbids any advertising, any increase in power of the transmitter, and all night transmission except in local emergencies.

In 1962, the callsign VL2NI was granted, although on-air ID is usually given as ‘Radio Norfolk’ or, more simply ‘2NI’. Originally, broadcasts were on AM only, using a 50 watt transmitter on 1570 kHz. A change was made to 1566 kHz in 1978 as part of a Pacific wide frequency move.

Fire and old age of the transmitter have twice put VL2NI off the air. Now, it has a brand new AM transmitter, and a second one for FM simulcasts on 93.9 mHz. Both pump out the colossal power of 50 watts, which doesn’t really drain the local power generators.

The studios are in a modern building on New Cascade Road, a few minutes walk from beautiful downtown Burnt Pine, the commercial heart with duty free stores, malls and offices. The DJ looks out across a field containing, you guessed it, cows. In the distance is mighty Mt.Pitt, highest point on the island. Out the other window is the Public Works Department depot.

The building is shared with the Public Library. Hibiscus flowers cling to the walls, and the door is wide open. In the backyard is the AM tower, standing against a clear blue sky, and surrounded by the FM loop antenna, and the latest acquisition, a parabolic satellite dish donated by the Norfolk Island Rotary Club.

Inside, untidy noticeboards list programs currently available for broadcast, boxes of tapes clutter the floor, rock music posters cover the walls, and there’s all the other paraphenalia which make a radio studio feel like home. And it is, to the 14 part-time volunteers, who put out some 116.5 hours of programing weekly, 71% being live local broadcasts. Other programs come from the Australian Broadcasting Corporation, Voice of Germany, BBC and Radio Netherlands. The satellite dish has opened up new program options as well.

During weekday afternoons, the programs of the ABC’s 2BL-AM Sydney are now rebroadcast on both AM and FM. On Saturday and Sunday afternoons, the AM outlet relays 2BL-AM New South Wales Sports, and the FM outlet carries the main Pacific service of Radio Australia from Melbourne.

Late at night, the rock music programs from the ABC’s 2JJJ-FM youth network from Sydney are relayed, and other program choices include the ABC’s Fine Music FM Network and Radio National.

Local DJs choose their own music, and each has a popular following for their particular choice. Country & Western ballads are the most popular, and the Breakfast Show features listener requests, birthday or other celebration calls, local notices and weather forecasts.

Everyone is self-taught at the station, the hard way, by simply going on air live. The volunteers have organised their own filing system for the paperwork that even this small station generates, and are planning to computerise the music collection details. The station engineer manages the ‘Jack and Jill’ store, selling children’s clothes to islanders. He handwrites his correspondence, and his wife types for the station.

Only the Broadcasting Officer gets paid, for just some of the work at Radio Norfolk. Kathy Le Cren comes from New Zealand, her daughter, Sally is ‘volunteered’ to become an unpaid DJ. Some of the announcers receive a small honorarium for maintaining core broadcasting hours, but mostly, and for most, it’s a labor of love and island community spirit.

Radio Norfolk has come a long way from the early days in the late 1940’s when fortnightly flights by RNZAF military aircraft staging from New Zealand to Japan landed at the local airstrip and brief announcements were made over the Civil Aviation transmitter for flight arrivals. Shipping arrivals were similarly greeted, and somehow, music was soon played just before an aircraft or ship was scheduled to arrive. A record player was placed alongside the microphone in the Civil Aviation office.

During the mid to late 1950’s, broadcasts originated from the local telephone exchange. There were only 20 subscribers, and the exchange opened at 10am. With not much else to do, the operator moved into the next room and broadcast her choice of music, aircraft arrival information, and some ‘educational’ talks. These carried on until midday, and evolved into a Monday-Friday service. On weekends, the Officer in Charge carried on with several hours of music each day.

‘Hot’ Radio……Or ‘Burning Down the Station’

In 1960, the telephone exchange moved from the airport to the administration quarters at Kingston. Radio Norfolk was now broadcasting with a second hand transmitter of 8-12 watts power. In 1967, there was a further move to the Public Library and Museum building also in Kingston. This building was totally destroyed by fire in 1970, and the station remained silent until 1971 when it moved to its current location in the center of the island.

In the late 1960’s there was a ‘nine day wonder’ on the island. The local owner of a duty free store found he wasn’t selling as many radios as he wanted, so decided to start his own pirate radio station. Broadcasting on AM, the station carried music and local ‘cheerios’ or greetings to listeners. On such a tiny island, the radio inspector soon found the transmitter, and closed it down.

An attempt to establish a local commercial radio station on the island foundered at the same time. Partly on commercial grounds, but more importantly, because of a battle between bureaucrats in Canberra and Norfolk Island who each claimed the sole right to licence radio stations on the island.

(Almost) The ‘Sounds of Silence’

The isolation of Norfolk Island reduces daytime listening options considerably. Apart from VL2NI AM and FM, the only other signal heard with excellent levels is Radio Noumea on 666 kHz from New Caledonia, some 800 km to the northwest. As programs are entirely in French, it’s not a popular option. New Zealand’s National Radio 100kW transmitter 2YA Wellington on 567 kHz is a weak alternative.<

At night-time, signals flood the AM dial from the western coast of New Zealand, the eastern seaboard of New South Wales and Queensland and Fiji.

The advent of satellite radio brings mixed blessings to Radio Norfolk. On the one hand, it provides more program options, such as those already being enjoyed from the various ABC Radio networks. On the other, it signals that the days of pure local radio may soon be numbered.

In the meantime, a strong community spirit keeps VL2NI Radio Norfolk Island on air to keep the locals, and the visitors in the motels, hotels and duty free stores entertained and informed. After 37 years of broadcasting, Radio Norfolk maintains a quiet Pacific tradition of local service that’s a pleasure to listen to, especially in FM stereo.

A relaxing little 50 watt station on an island that has given the world the famous Norfolk Island pine tree, and one which serves the best cup of coffee this visitor has ever enjoyed. If only for the coffee, Radio Norfolk deserves a special mention in the history of Pacific radio. It must be something in the milk from those darned cows munching away at the grass near that AM tower.

Special thanks to Kathy Le Cren, Broadcasting Officer, Radio Norfolk (maker of great coffee); and Mrs Merval Hoare (widow of Ray Hoare VK9RH, officer in charge of the Civil Aviation Department and first broadcaster on Norfolk Island). This story was written in 1989.