It’s hard to imagine that within living memory, California once had only a little over 50 radio stations on the air. There was no FM radio and TV was also in the future. Hollywood had just introduced ‘The Talkies’, movies with sound. That’s California in 1928, when the population of the San Francisco-Bay area was about 1.5m and that of greater Los Angeles only 2m.

The radio dial stopped at 1500 AM, there were no radio stations broadcasting north of San Francisco and only one station was on the air in the state capitol [Sacramento] which then had a population of just 100,000 people. There were still orange groves in Orange County.

Almost half of the stations were located within the Los Angeles metro area alone, including one of the two strongest signals on the Californian radio dial, KFI 640 AM. At the time, KFI had regular listeners as far away across the Pacific as New Zealand, where radio magazines even published its program details and where older listeners still remember the KFI call.

In 1928, the Californian radio dial was orderly, in stark contrast to the earlier years of the ‘Roaring 20’s’ when stations broadcast atop of each other in an unregulated and chaotic period of early experimentation with this fantastic new entertainment medium.

Just a few of these heritage radio stations remain today, still using the same calls that for 80 years have entertained, informed and provided friendly company to many generations of Californians. Most of these stations have simply faded away into silence, leaving just memories of old time radio, the performers, the stars, the sports and the music.

This reflection on the California Radio Dial in 1928 is dedicated to all those involved in bringing radio into the homes and hearts of millions of Californians since then.

This list is from the January 31 1928 Radio Service Bulletin, Department of Commerce, Washington DC.

If you enjoyed this article, you’ll also enjoy our mini-series about the turbulent history of religious station KFSG Los Angeles, the 80 years story of what is now KTNQ 1020 in Los Angeles, and the true story behind the Mexican bandit whose music was broadcast from KELW Burbank including audio samples.

The EKKO verification stamps have become valuable collectables, and we recommend radiotribute.com as a good site to see more of them. 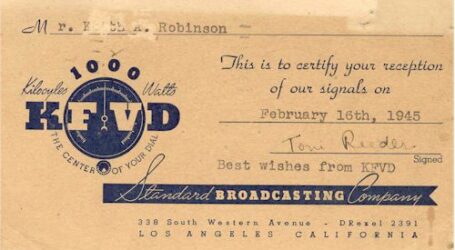