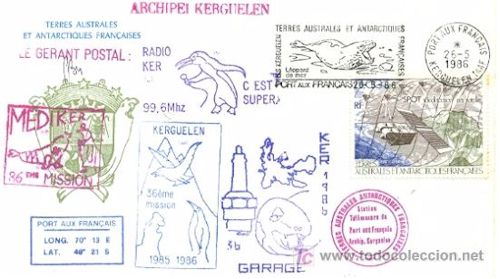 Radio Ker has broadcast for some 20 years and its penguin rubber stamp logo is a popular collectors item. © Radio Heritage Foundation

There’s competition along the Antarctic radio dial. Yes, McMurdo alone now boasts three FM stations, and the nearby New Zealand base has yet another.

Antarctica may be the least populated of the continents, but the number of radio stations on air is growing as scientific bases expand, the permanent population gets larger, and satellite delivery of programs from elsewhere becomes economic.

Thom Wilborn is seated at the controls, pointing out cuts on old 33 rpm disc records supplied by AFRTS.

With him are Electronics Technician 1st Class (ET1) Bob Flint and another ET1 who’s name is unknown.

Says Thom “Both were wonderful men who built the station from scratch, and both worked as volunteer announcers in the off-hours, which were very few.”

As early as the 1960’s, WASA at McMurdo, [the main American base] was one of the first stations on air, at first operating on 600 AM with 50 watts. As time passed, this became AFAN [American Forces Antarctic Network] and the station used SW 6012 with 1kW to provide service to several other American bases.

However, the use of HF broadcasting in Antarctica suffers badly from sunspot activity and complete loss of signal for sometimes days on end. For this reason, AFAN moved to local low powered FM with several program streams coming in via satellite from the USA and some local volunteers manning the original WASA studios. When the US Navy ceased support activities for Operation Deep Freeze, the AFAN facilities also changed nature.

Today at McMurdo, there are three radio stations. Only one of these [93.9 FM], is a satellite program feed from AFRTS. A local community station known as Ice FM on 104.5 FM has emerged as today’s incarnation of the old WASA. For a long time, the station only used vinyl recordings left over from the AFAN operation [reputedly originating from the old AFVN – Armed Forces Vietnam Network – studios in Saigon].

Now that McMurdo has grown large enough to have several Wells Fargo Bank ATM machines and even a café, a third station has emerged on the air, known simply as ‘88.7 FM’ and already popular for its sardonic station ID’s. Although classified as a pirate radio station by some, it operates in a kind of no-mans land for radio regulations.

McMurdo is located within the New Zealand claimed Ross Dependency, a territorial claim ignored by the Americans. US currency is used at the base, which does however, keep New Zealand Standard Time.

The Washington based FCC has no control over McMurdo airwaves, and the 88.7 FM frequency just happens to be one of the low power FM frequencies permitted by New Zealand’s radio regulatory authorities as one where no licence is needed to operate with less than half a watt of power. This is more than enough to cover downtown ‘Mactown’.

Meanwhile, listeners at the nearby New Zealand Scott Base, have for several years been able to enjoy their own radio station as well. Radio Scott Base at 97.0 FM is another volunteer run station for entertainment, and is also popular listening whilst driving along parts of the ice highway linking McMurdo and Scott bases.

So, flick along the FM dial whilst out driving around the area and you’ll find programs from four separate radio stations. This is a bigger choice than that found in many small communities in either New Zealand or the USA. Even more amazing – three of the stations are live and local!

Another local station, though not live, is at the Amundsen-Scott South Pole station. This is as far south as you can get, and here, at 87.5 FM you’ll find it’s KOLD. In actual fact, it’s just an automated 100 CD player broadcasting across the double story polar complex from a low power FM transmitter.

The main Australian base at Wilkes has been known to broadcast live programs on FM from time to time from Radio W.I.L.K.E.S.

Most well known of other radio stations in the Antarctic is Radio Nacional Arcangel San Gabriel [LRA36] broadcasting from Base Ejercito Esperanza in the Argentine Antarctic.

On SW 15476 with 2kW, LRA36 is heard around the world, and its signals provide coverage to not only the Argentine bases in the region, but also the southernmost areas of the Argentine mainland itself. Live and local daily in Spanish, Radio Nacional Arcangel San Gabriel also broadcasts on 97.6 FM.

Whilst more research is still needed on the broadcasting situation at other bases in the region, the Chilean base at Villa das Estrellas in the Chilean Antarctic is home to Soberania FM on 90.5 FM.

The French territory of Terres Australes et Antarctiques Francaises [TAAF] includes Adelie Land on the Antarctic continent, as well as a number of Southern Ocean islands.

At the district headquarters base of Port-aux-Francais on Kerguelen Island, a long running local community radio station is Radio Ker, 98.0 FM. This station is well known amongst the French speaking community and the station logo often features on philatelic mail sent to collectors from the local post office.

Local listeners at Port-aux-Francais also have the choice of two satellite feeds. During Monday-Friday, France Inter from Paris is relayed on 100.0 FM, and on the weekends, the feed is switched to RTL on the same frequency.

Antarctic Radio…..it’s not just a KOLD Deep Freeze any more!

ON AIR: Studio volunteers for Radio Lollipop painted their studio red to raise money for the programme last year.
November 2, 2011 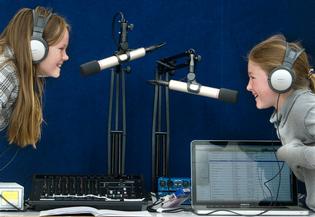 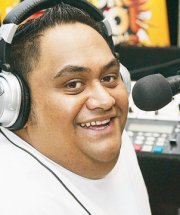