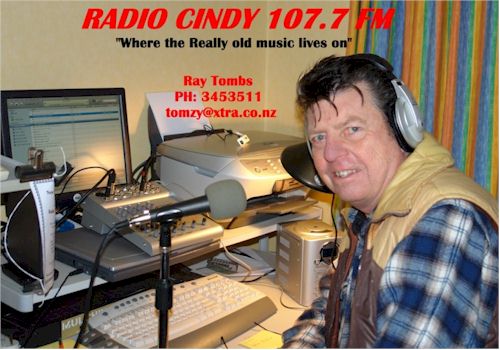 Ray Tombs at the mike of Radio Cindy © Ray Tombs

If You Want a Radio Station, Go for It

As a child I always fancied being on the radio, playing cool music and emulating the gun DJs, right through my life it’s always been a pipe dream, up until recently. With a 29 year marriage left behind me, a 62 year old solo guy can do what ever he wants if he has the money and motivation. My lovely new lady Cynthia has been an inspiration to me in getting my life on track and realising dreams.

We have been seeing each other over two years and because of her, together we have done the music scene in Nashville, New Orleans, Memphis, been to Graceland, Grand Ol Opry, Country Hall of Fame, Sun Recording studios, BB King’s and much more.

“If you want a radio station, go for it”, was always one of her little encouragements. Cindy is an unusual person in so far as she is always happy, laughs when she talks, is never negative or down and has had vast experience in her own successful business ventures.

August 2007, a friend from Taupo rang to tell me there was a low power FM radio station just fired up in the area and the music was great, no commercials and not much chat.

Cindy lives in Taupo, I’m Rotorua, when I called to visit her that Friday we tuned in, it was good.

Always two steps in front, my lady had already been on the net and to our delight, the well advertised LPFM station pages were wall-to-wall with information, better yet, the price to make me and my favourite music world famous in Rotorua was within budget!

First email out was to Dave at the Radio Heritage Foundation and his prompt reply was informative and encouraging. Back on the net I go and download The Mulcher . Tony operates from Kawerau in the BOP and he also was fantastic at response to my email and a comprehensive reply on all I needed to know to procure the goods to go on air. It takes a bit to get me excited these days but mate… I was excited.

I Have Decided To Go For It

15th August
I have decided to go for it, I am looking at $3000 for all I want to get started. It’s no good in the bank when I’m dead. I will dedicate the station to my inspirational lady Cynthia, RADIO CINDY FM.

17th August
Called to see The Mulcher, he was very helpful, I have placed the order. Instructions were to drive around my area with an FM receiver and find a frequency not being used so the transmitter could be set to that. Tony came through to Rotorua and did a double check for me and we are ready to go on 106.7FM.

5th September
Transmitter and antenna arrived. In the meantime I’d bought a new microphone and 6 channel mixer desk, a telephone interface so we can go live with chat and a set of headphones.

I purchased and installed a 10 metre, telescoped aluminium mast to fix the antenna to and guyed to the roof of my house.

Antenna Up And We Are Broadcasting

7th September
Antenna up and we are broadcasting. I’m running my microphone and laptop music library through the mixer, the music is coming through great but the voice is very low. After making enquiries at the local music shop it was revealed that the mic lead is stereo, going into mono, I installed a new lead with cannon plugs at both ends and now all is going fantastic.

Driving around town I have found the station is coming in quite good. There is a gospel station in the central city on the same frequency, they were only blocking me on a small radius of their station but have now seemed to have upped the output to flatten me for quite some distance. I have emailed my supplier to see if I can change my frequency.

Feed back from friends is good; they are receiving me from their cars around the back of Rotorua. I have printed 1000 A5 flyers to do a mail drop in my area and am giving out my email on air offering requests, dedications, free advertising to any business that can receive us, birthday calls, just whatever…. Aaaah…… nothing back in two days, just have to be patient and go with it for now.

Darn, Now To Hand Write The New Frequency On 1000 Flyers

19th September
I have changed frequency, now on 107.7FM, this has eliminated the clash in town of the gospel station. Darn, now to hand write the new frequency on one thousand flyers!

Still not one email back for a request, must be my aftershave!

It was a buzz to call at my local Post Shop and hear Radio Cindy being played there as background music and good feed back from the staff there.

26th September
Station laptop crashed and died completely, I hooked up my personal one to get back on air, the next day I bought a new 80gb tower with Vista [NZ$600], setup and running great that night, have fingers crossed.

3rd October
Too much gap between each song, so I switched in 5 second cross fade, that worked well on the music but then my voice overs were being cut short. So I re-recorded and added them. Searched for all the old adverts, selected all and hit delete. Um……….. I had selected my entire music library! It deleted it all. I had to get it back there from the delete bin that took thirty minutes with station playing a carrier. Maybe I should take up speedway racing and get rid of the radio? However, that evening I fine tuned it and all is working well, what will be next.

STILL not one email back from any listener, are there any?

I originally ran the music through Itunes which has a lot of good features, but now I have moved on to Sam2 and though it was a little tricky to get sorted, is far superior in my opinion and the crossover is much better than Itunes.

School Down The Road Obliterating Me All Over Town

Although it cost $250, my new mixer is no good, keeps crackling at will, so off to buy a new Belringer, it is excellent.

I have the primary school 2kms down the road obliterating me all over town, they are on 107.5, the 8-9-10 year old kids wind everything up and take over the band, I have spoken to the lady in charge and we have got it sorted, good to be able to work in.

The Phone is Ringing!

The phone is ringing and I am getting heaps of answerphone messages and feed back from the older age group loving the music, word of mouth amongst them has seen a good growing accumulation of listeners.

I have been in touch with the likes of Patsy Riggir, John McRae, Don Wilson, Greg Winch, Raymond Solomon, Paul ‘Ivor’ Fisher and Dennis Marsh, they have all kindly given me voice ID’s, “Hi this is…………. I hope you’re enjoying the music Ray is playing on Radio Cindy, 107.7FM, top of the dial.”

It gives flavour. Unprompted Greg Winch created and sent me a Radio Cindy sting, it’s so cool and goes to air about 3-4 times an hour, more in the pipe line he says.

They have all sent me copies of their CD’s to play and they get plenty of promo.

Thanks For Listening on Grandpa’s Radio

I also have voice ID’s of two of my young granddaughters saying, ‘Thanks for listening on Grandpa’s radio’, all good fun.

It was my pleasure to invite Dennis and Yvonne Marsh to become Patrons of the station and a buzz when they accepted.

I have bought some fantastic books on early NZ music and the rock ‘n Roll era from 1954 to 2004, the information is valuable as add on to the songs I play.

Recently via wheels within wheels, I was lucky to meet Gary and Jan Bai who live up the road from me, Gary was part of the Sapphires band in Wellington some years back.

Jan and he have recorded two CD’s of traditional country and Gary plays some awesome tunes on his Fender Stratocaster, their music is on air most days.

Bringing The NZ Talent Back Out Of The Cobwebs

The music I play is from about 1940 through to the 70’s, music I grew up with, plenty of variety from Alma Cogan, the Andrews sisters, Mills Bros, Elvis, Fabian, Linda Scott, Johnny Devlin, plenty of old Rock ‘n Roll and country. Though I only have about 3500 songs in the library, it’s growing with the purchase of el cheapo CD’s from the Warehouse.

I have a lot of NZ talent on board and enjoy bringing the talent back out of the cobwebs.

Don’t Know What My Listeners Think, Don’t Care. I Love It

My passion is bringing the late Wolfman Jack back to life and handing the station over to him, his skits, chitchat and fun are up for grabs in the ether and I have plenty of him, don’t know what my listeners think, don’t care, I love it.

Even the Goon Show gets a run now and then along with Hancock’s Half Hour, Frankie Howard and others. So LPFM has given me new direction in life and many thanks to all who have helped get me get set up and to those who are now part of Radio Cindy on air.

Ray Tombs wrote this diary of how he fulfilled a lifelong dream to own and operate his own radio station. We’re grateful to Ray for sharing his dream with readers. If it inspires you to start your own station, write and tell us of your personal radio journey! The radio dial is waiting for you too.

If you’re visiting Rotorua, New Zealand, tune to Radio Cindy 107.7 FM. Better still, give Ray a call, request a song, advertise your business with him, and tell all your friends. Radio Cindy Rocks Rotorua!