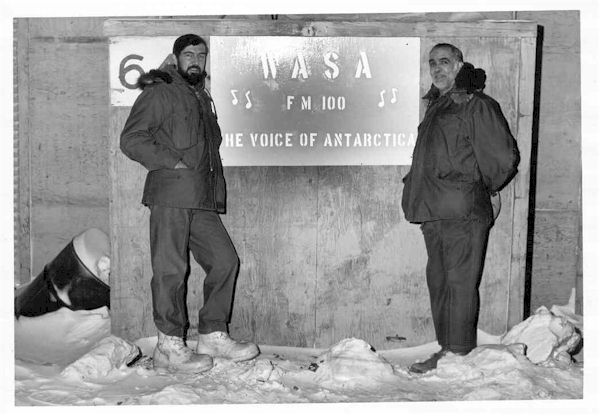 In 1971 I had the privilege of being deployed to the Antarctic for one year and three days. The following are excerpts from my diary in regards to my involvement with the WASA radio station at McMurdo.

During the winter over period of 1970-71 the radio station, WASA, providing news and entertainment to the crew, utilized an AM transmitter for broadcasting. During the austral summer of 1971 the transmitter became inoperable. A replacement FM transmitter was enroute from the States but would not arrive till after Thanksgiving.

To help with crew morale, the electronics technicians on base utilized a mobile FM radio to create an “underground” transmitter, broadcasting taped music on the FM band, and gave the station the call sign of MUGR (McMurdo Under Ground Radio). This had limited operation because the transmitter utilized was not designed for continuous broadcasting and tripped off the line numerous times. On 30 November Capt Van Reeth (summer Commanding Officer) directed the radio be shut down. We tried broadcasting on another frequency for two more days with call sign WRFM (Radio Free McMurdo) but due to transmitter limitations we ceased that effort on 4 December 1971.

Knowing that a new FM transmitter was enroute to the site a group of us (Bob Flint, Walter Harris, Mike Provot and Kieth Miller set out to build a “professional” studio in Bldg 64. With some “technical” guidance from JO3 Thom Wilborn, construction of the studio was started on Dec 4th. We installed a wall with a plexi-glass window so visitors could see the operation. A cue board was manufactured, dual turn-tables installed, and an equipment rack assembled which provided technical flexibility allowing interface with the McMurdo Station phone system as well as HF shortwave radio.

The FM transmitter was received in early December and installed at the Transmitter Site. The 100 watt FM transmitter went on the air at midnight on 13 December 1971. All the electronics for the studio was completed on 16 December.

Thom Wilborn got several volunteers and set up programming while he was there during the austral summer. I took over as the winter station manager and broadcast 6 AM till midnight, 7 days a week with the help of 14 other volunteers. We had 5 news/sports broadcasts each day utilizing UPI teletype news stories along with a structured schedule of AFRTS shows and “Disc Jockey” controlled music from Country to Classical.

On 3 January we were told that Bldg 64 would be torn down at the end of the winter. After all that work we were a bit depressed but figured we would deal with the teardown when the time comes.

On 12 January 1972 a group of VIPs arrived and Thom Wilborn interviewed Senator James A. Buckley from New York and William F. Buckley, Jr., the writer. Both interviews were broadcast on the air that evening.

Since the FM transmitter installation we had been operating with the antenna installed on the building at the Transmitter Site. On 25 January I installed the antenna 55 feet up on the mast of the Russian Rhombic Antenna at the site to increase our broadcast range since it was basically line-of-sight. On 29 January the Rhombic Antenna tilted to about 70 degrees. WASA was shut down for a day so the guy wires could be adjusted.

On 21 February I was the station announcer when President Nixon first set foot in China. I broadcast it live at 1532 McMurdo time.

On 3 March 1972 the base was in Storm Condition I with winds blowing 40-50 MPH gusting to 80 MPH. This continued for several days. WASA was utilized as a “Civil Defense Communications System”.

The first “live” coverage of sports occurred on 10 March 1972 when we broadcast from the bowling alley utilizing the base phone system for connectivity.

Then on 11 April at 2250Z we had our first live broadcast from the States when my wife, Flo, said hello to the troops via a MARS phone patch. Her words were: “Hi fellas. I hope you enjoy winter-over. Remember, there is a lot of love waiting for you back here. NOT FROM ME!! From YOUR wives!”

On 17 April 1972 the launch of Apollo XVI was covered live. HF comms were bad, so later that day Ham Radio operator, Dave Porter from New Jersey, fed a tape that he had made which was crystal clear. On the 21st we covered the Orion moon landing, live, at 0223Z and later lunar lift off on the 24th.

The rest of the winter operation of the station became routine. I took on other projects like Mid-Winter Party and editing the yearbook.

For some reason I didn’t cover the shut down of Bldg 64 in my diary but I remember moving the studio to a small room in the Barracks, again with the soundproofing and plexi-glass window. I departed Antarctica on 13 October 1972.

I know we could never compete with the Radio and Television operations that exist there today but WASA was a major morale factor during the Deep Freeze 72 winter over period.

Our thanks to Bob Flint for digging out the original WASA Yearbook entries showing the volunteers who kept the station on the air during the winter season 1972 and contributing so much to maintaining morale amongst the wintering over personnel at both McMurdo Station and the nearby New Zealand Scott Base.

If you enjoyed this article, you’ll also enjoy ‘Antarctic Radio Melts’ and our many AFRS related stories. 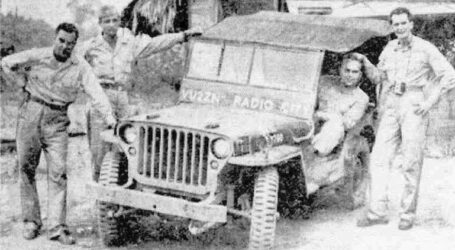