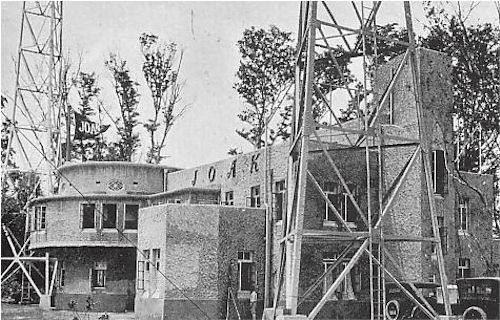 During 1941, Japanese radio audiences had almost 50 local AM radio stations they could listen to for a large part of each broadcasting day.

In 1931, a second network had already been completed in the three main centers of Tokyo, Osaka and Nagoya.

Expansion of the network continued in the rest of the decade that followed, not only in Japan itself, but also in occupied territories such as Formosa [Taiwan], Korea, and Manchuria where sometimes quite powerful stations were built.

On the eve of the bombing of Pearl Harbor in the Territory of Hawaii [December 7 1941], the broadcasting network had extended further to include occupied French Indo-China, and General Tojo Hideki had become Japanese premier a few weeks earlier.

Rapid urbanization of the mainland Japanese population was also taking place during this period of the 1930’s, with almost 40% of the 73.1 million people living in towns and cities by 1940.

Programs by now were increasingly reflecting the militarist policies of the Japanese government, but audiences still enjoyed a wide range of Japanese and classical Western music, educational programs including English language lessons, physical exercises, and tips for growing vegetables in the cities.

Until very recently, Japan had also been avidly promoting itself to Americans as a vacation destination ‘More for your dollars…. thanks to the yen’ headlining this half-page advertisement in the Christmas 1936 issue of the National Geographic Magazine.

Listeners around the Pacific region who couldn’t visit Japan, could easily hear broadcasts of the two most powerful stations, JOAK-1 on 590 AM and JOAK-2 on 870 AM both broadcasting from modern studios in the heart of the bustling capital city of Tokyo.

Here is our exclusive look at the Japan Radio Dial 1941, the stations that Japanese audiences were listening to on the eve of war.

Remarkably, most of this broadcasting infrastructure remained in good condition at the end of hostilities just four years later in 1945.

Under Allied occupation, stations such as JOBK in Osaka were transformed into two networks – one using the same call-sign and broadcasting in Japanese for the local population, and another as a local outlet of the US Armed Forces Radio Service. Japanese and American broadcasters worked alongside each other sharing the same studio facilities.

Within just a few more years, independent state broadcasting was established and Japanese commercial radio stations began to quickly flourish alongside both the new NHK network and a declining number of [now] Far East Network stations for US forces still stationed throughout the islands.

During the decade leading up to 1941, local Japanese AM radio stations carefully responded to listener mail from overseas with often friendly personal letters in English, and a range of listener cards [QSL cards] as used to illustrate this article.

For a broader view of Japanese broadcasting from the 1920’s onwards, you’ll enjoy our popular Art of Radio Japan © Exhibition which introduces you to many of the beautiful art designs used by the new stations of the 1950’s as they began to establish their brand identities for local listeners.

You’ll also enjoy AFRS Japan, one of our growing numbers of exclusive AFRS articles. This one looks at the history of AFRS stations in Japan from occupation into the early 1960’s and is again well illustrated with items from our collections.

Other related Japanese broadcasting stories now available include personal memories from an American DJ at AFRS Sapporo ‘Smashing Records in Sapporo’ and another from the founder of KSBK Okinawa in the early 1950’s ‘KSBK 880AM Radio’ as well as a review of Radio Tokyo broadcasts 1941-1945 in ‘Radio Tokyo at War’.

If you have any memories to share about any kind of broadcasting in Japan, photos, memorabilia, audio or other items you’d like to tell us about, please email us or write to us.

This exclusive listing of the Japan Radio Dial 1941 is extracted from ‘All the Radio Calls of the World’ 1941 Edition, a publication of the New Zealand DX Radio Association, a listener club that provided this service for its thousands of members. The information in this feature article is not to be used anywhere in any form without prior permission. 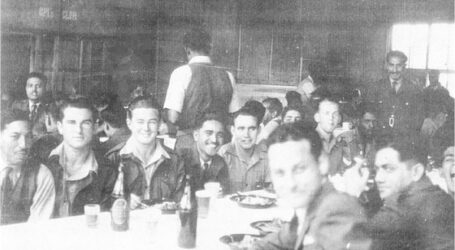 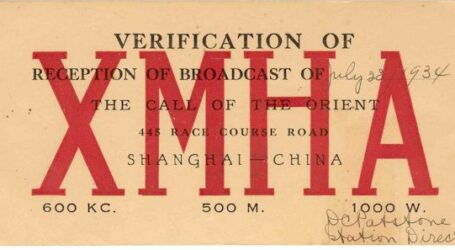