A decade has passed since Station 2AD took the air to serve the New England Tableland, which technical experts will tell you, is one of the most difficult areas in the State to serve day and night the whole year round.

2AD is located at Armidale, the University centre of the provincial districts of Australia. Armidale is 3,300ft. above sea level. The station situated at North Armidale, is 160ft. above town and the masts are 120ft. high, so that 2AD is “on top of radio” in Australia. It is the highest-located station in the Commonwealth.

Operating under the official title of New England Broadcasters, 2AD is independent, with complete charge of its policy and activities. As its slogan asserts 2AD is “The Voice of New England,” and it is more because to the North, North-West and on the North-Coast sets are tuned to the Tablelands Station.

Breakfast sessions are conducted by CLIFF DODD, whose name is a household word in thousands of homes. Cliff also handles the local aspects of the A.S.B. Racing Broadcasts every Saturday afternoon. This programme comes by landline, and every “sporting” set is tuned to 2AD when the races are on.

WALLY FREWIN, PETER POGGIOLI, ROY STAUDE and “Glen” (the air name of the Manager, R. L. BLAKE), also hold large audiences. LOIS KESTEVEN, in charge of the daily women’s session has a wide circle of listeners. The audited report of paid birthday calls for 1945 reveals 4666 separate calls They came from near and far, and certainly further afield than the Station’s official service area. 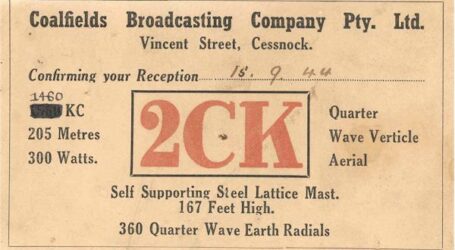