Let’s get straight to the point with this book. If you have even the faintest interest in Australian radio heritage, from any angle, you must buy this book. It’s big [530 pages], it’s a bold traverse of the subject and it’s worth every penny.

The author says ‘material recording the development of Australian commercial radio, held in multiple forms and formats, is scattered across Australia and beyond’ and recollects turning up to a radio research roundtable in 2006 with a paper entitled ‘Writing a history of commercial radio in Australia: The Kiss of Death?’.

In late 2009, after using 7 research assistants, scouring icy basements full of old documents and interviewing countless people, Bridget has actually achieved in pulling together the strands of the story.

The book does duty to ‘The Industry’ and ‘The Programs’ and wisely concentrates the substance of its coverage in this latter area, supported by some 100 pages of notes, appendices and blazing beacons for further study.

It’s a bit like going along to one of those city wide restaurant tasting days, where you can taste the highlights of tantalizing menus. You get a glimpse of what’s possible.

For instance, ‘Radio Periodicals’ coverage takes up just two pages, but we know that within those hundreds of thousands of pages of hundreds of titles hinted at, there are so many diamonds [and rocks and dust] to discover if we go looking further.

Is it really ‘The Story’ of Australian commercial radio? Yes, in the sense that it traverses some 90 years of cultural heritage and local politics interwoven with technology changes and the shifting mores of popular culture.

No, in that there can never be just ‘The’ story when the subject touches millions of Australians, each with their own ‘radio story’. Many have been lost forever, others remain to be recorded.

Tackling commercial radio history and heritage is not for the faint hearted. There’s a definite snobbery within Australian academic, arts and cultural circles against ‘commercial’ anything [look at how badly commercial art fares compared to other works] and mention of the words ‘commercial radio’ soon brings out the latent preferences of many commentators for the noble use of radio a la the ABC.

In fact, the book usefully covers the early philosophical battle that resulted in the hybrid system of broadcasting that eventually emerged in Australia.

Of course, Australian commercial broadcasters have never helped their own cause. With the exception of some individuals, commercial radio has shown little inclination to preserve its heritage – which once reflected that of its local communities – spending more time on ratings and the money.

However, the author makes a valiant effort to augment official records with anecdotes, memories and other ‘colour’ to lift the study out of the quicksands of paper based minutae of passion draining detail. This blend is what makes the book fascinating and riveting reading.

The Radio Heritage Foundation warmly welcomes this genuine and serious attempt to bring together many of the scattered resources telling the story of Australian commercial radio.

It’s the core of our own approach towards connecting popular culture, nostalgia and Australian radio heritage and we’re grateful to Bridget for developing the subject further and so professionally in this very entertaining book. 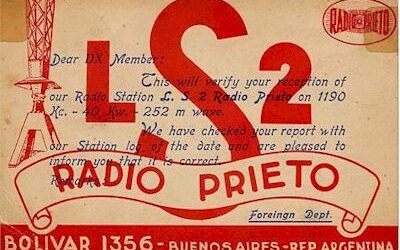 LS2 Radio Prieto 'was heard throughout South America, Europe and the U.S' with its powerful 40kW transmitter. This reception card was sent to an American listener. © Committee to Preserve Radio Verifications Collection, Library of American Broadcasting, University of Maryland
May 11, 2009 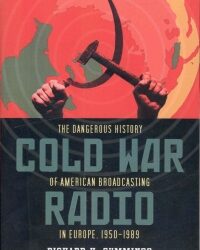