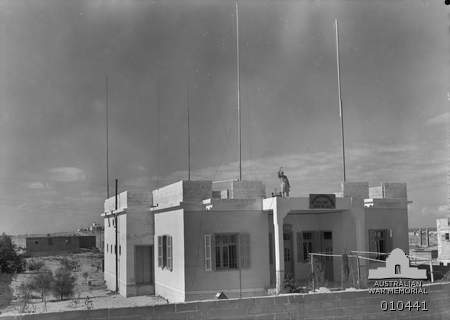 When World War 2 began in 1939, radio broadcasting was still just a teenager, having started in the early 1920’s in Australia, New Zealand, Canada and the USA.

This young entertainment upstart was immediately drafted to ‘the cause’ and Armed Forces Radio stations appeared first, unofficially, in Alaska, whilst the Australian and New Zealand government broadcasters sent mobile broadcast units to the Middle East.

This was new territory for both broadcasters, who had to juggle wartime censorship and a legitimate demand for their volunteer military units to stay in touch with their families back home.

When the Pacific War brought operations much closer to home, the American AFRS mobilised private commercial radio broadcasters and began to move their units into the South Pacific where they later introduced radio to some local islands for the first and only time in their history.

The first joint Australian and US station was 9PA in Port Moresby, whilst the Australian RAAF also maintained a mobile station at Madang.

Like the Americans, the Australians could also draw on commercial radio broadcasters although 9PA was technically under the control of the ABC because Papua was an Australian territory.

This former troublesome teenager called radio was in it’s early 20’s by now and getting the hang of romance and adventure.

‘Tokyo Rose’ began flooding the Pacific airwaves with soft and seductive propaganda programs, and the AFRS responded by implanting ‘hometown’ radio stations everywhere GI’s were gathering across the region.

Australian Army Amenity Service radio stations were finally ready for action as the Pacific War ended, and one of their earlier implants was also a ‘hometown’ station in the exposed Northern Territory of Australia itself.

With the words ‘This is Armed Forces Radio broadcasting from Tokyo’ a new era dawned, followed quickly with Australian, New Zealand and other Commonwealth broadcasters adding their voices to Japanese airwaves.

As well as the massive AFRS network covering Japan from north to south, WLKS an Australian AAAS station with an American callsign was on the air, and even New Zealand found space on the dial with AKAA at Yamaguchi.

AFRS and AAAS radio stations were scattered across the broad expanse of the Pacific at the close of World War Two, with additional AFRS stations throughout colonial India and pre-revolutionary China.

Radio SEAC [South East Asia Command] was re-establishing itself from Ceylon ahead of Indian independence and by 1950, as China and Korea emerged as new areas of concern and the ‘Bamboo Curtain’ began to sweep down across northern Asia, Australia’s WLKS still entertained remaining ANZAC troops at Kure, near Hiroshima in Japan.

On the Korean peninsula, the Korean War had erupted, with the United Nations sending forces and a by now very mature thirty-something ‘radio’ into the conflict. AFRS mobile radio stations were shipped from Japan and in the fast moving battles, an entire station was lost near Seoul.

ANZAC and other Commonwealth units were also engaged in the fighting, and ‘Radio Commonwealth’ rotated broadcasters from the UK, Canada, Australia and New Zealand in front of its microphones to provide links with home, and cricket commentaries instead of the baseball found on Vagabond and the other AFRS stations.

During the Malayan Confrontation with newly independent Indonesia, ANZAC forces were again to be found patrolling the jungles of Borneo and the Malay peninsula, and the RAAF established a long term radio station at Butterworth, near Penang Island.

Radio RAAF Butterworth [RRB] emerged out of use of the tannoy system at the camp by the RAAF No 2 Construction Company in 1956, when personnel wanted a local station with their own music instead of listening to shortwave broadcasts from AFRS on Guam.

Even whilst Malaysia and Singapore were coming of age as new nations in 1963, Australian, American and New Zealand personnel were being drawn into events in Vietnam, where a major US military broadcasting operation was being established, known popularly as AFVN [Armed Forces Radio Vietnam].

By now, radio had progressed from its formative teenage years in 1939 through to respectable middle age some 30 years later in 1970. Along the way it entertained and informed ANZAC forces in many fields of conflict from the Middle East and North Africa through the Pacific, the shores of Australia, and throughout South East Asia.

Together with American Armed Forces Radio stations such as 1ZM in Auckland, New Zealand and 4QR in Brisbane, Australia, AAAS, WLKS, AKAA, Radio Commonwealth, Radio RAAF Butterworth and AFR Vietnam were some of the memorable icons of the Fighting Voices from Downunder.

Radio had come of age.

For more detailed information about the Australian AAAS radio stations check out ‘Diggers on Air’ and for a photographic review of the 9AA and other AAAS stations and the NZBS Middle East Unit, see ‘ANZAC Day Salute’.

There are over 30 AFRS related features – see the header ‘AFRS Armed Forces Radio Memories’ for a full listing.

If you have any information, photos, recordings, memorabilia or any other items of interest about ANZAC radio broadcasts since 1939, we would like to hear from you and would be honored to share this material here.

You can ’email’ us or write: Radio Heritage Foundation, PO Box 2213, Stoke, Nelson 7041, New Zealand. Donations to help us research and present more ANZAC and AFRS broadcasting heritage are very welcome and can be made in memoriam to family members and friends if desired. 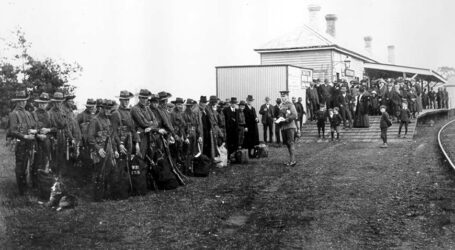 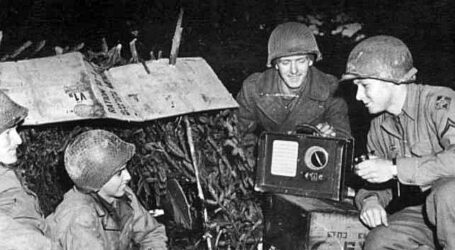 GIs listen to a radio, possibility one of the AFRS broadcasts.
September 21, 2019
Comments: 0