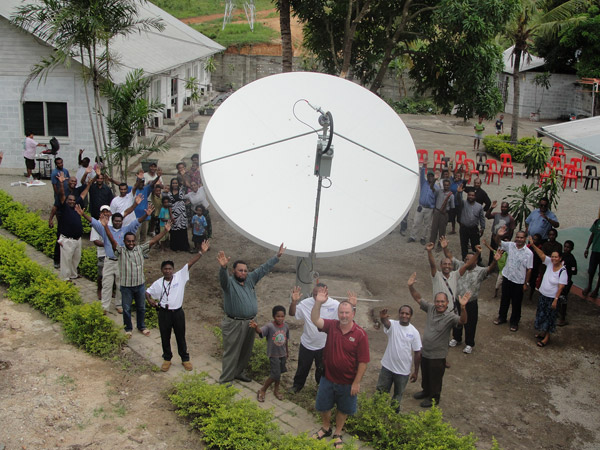 One of the most fascinating countries for international shortwave radio listeners continues to be Papua New Guinea… a large archipelago of islands to the immediate north of Australia… mainly because it has some twenty locally operating shortwave radio stations… and also because they seem to operate in a kind of information black hole.

We’ll have a look at some websites and share some of the ongoing research we use to maintain our databases for the World Radio TV Handbook and the PAL Radio Guides.

We’ll start with a radio station that began broadcasting around ten years ago, so it’s a relative newcomer on the dials, but well known through its shortwave outlet… and this is Wantok Radio Light. It has a dated website www.wantokradio.org but you’ll find a lot of useful information about this station, sometimes known as the Papua New Guinea Christian Broadcasting Network.

There’s a good coverage map, photos of some of the FM stations on high hilltops, a daily log of their program guide which includes a lot of automated music and information about their partners who include HCJB and the owners of the Radio Light radio network in Fiji.

In late 2010 they completed a full upgrade of satellite receivers for their existing network of FM stations, and in 2011 they’ll be adding around ten more FM outlets as part of their new radio licence conditions.

A new radio licensing authority has been increasing the pace of change recently. The two main mobile phone operators have to expand their services, first on a regional basis, then through a series of ever smaller geographical markets until even the smallest rural village has full coverage including broadband technology.

This is creating a major change for radio services. Firstly, it’s building the infrastructure from which FM radio signals can be broadcast, and many of the high mountainous tower locations allow coverage of between 100 and 200 kilometres.

MP3 standard stereo signals are now reaching places that half a century ago had hardly seen a European.

Secondly, the young population buy subsidized mobile phones with built-in FM receivers, and these are now the primary way of listening to local radio. In the capital of Port Moresby for example, which has a population estimated around 350 thousand, there are now some 15 different FM brands competing for an audience.

Thirdly, new FM licences are being issued to replace older ones, and these have specific dates by which planned network expansion must be completed. They often follow the expansion of the mobile phone tower infrastructure rollout, which in turn is being done at the same time as the national power authority upgrades its power supply systems.

Telikom, one of the mobile phone companies, operates FM100, the former commercial Kalang FM network of the state broadcaster NBC which it took over for non-payment of bills. Now it’s known as ‘Reaching You 100% – FM100’ and is embarking on a remarkable FM rollout designed to literally, reach 100% of the population across the entire archipelago.

The FM100 website is www.fm100.com.pg and it makes an effort to be contemporary in both style and content. You’ll find photos of the DJ’s such as Patric Patu who handles Breakfast, Roger Hao’fa who’s been taking talkback radio for over 25 years and Willie G who hosts the Boroko Motors drive show every afternoon…

…Yes, there’s a drive show in Port Moresby… and there’s a freeway system and an ever growing number of modern high rise office buildings leading back from the waterfront and harbour…

The website says they target 23-40 year olds with high disposable income and claims a potential audience across Papua New Guinea of around 2.5 million listeners. They invite advertisers with the claim ‘Our clients get results. It’s that simple’.

The strongest commercial competition is the Nau FM and Yumi FM combo owned by PNG FM which in turn is owned by Communications Fiji Limited, a public company listed on the Suva stock exchange.

According to their latest investors report, PNG FM claims very strong advertising growth in 2010, with revenues up by almost 30 per cent in what they call a booming economy. A new studio complex has been opened, and the owners claim to have two strong brands, a good product and weak competition.

They have a website www.pngvillage.net but you’ll find little of substance there, as the two networks continue their physical FM expansion and their Fijian owner invests in a new movie complex for Port Moresby and expands into corporate events such as expos for the mining sector.

Earlier we mentioned Wantok Radio Light, and this country with hundreds of languages and dialects excites the hearts of missionaries who feel challenged to preach their messages to millions of potential radio listeners.

Factional tensions within the Catholic faith closed down the original Catholic Radio Network some years ago, replacing it with a branch of Radio Maria in Port Moresby which now produces some network radio programs.

However, a grassroots network of locally owned community stations, loosely known as the Voice of Blessed Peter ToRot Radio continues to flourish and expand more FM stations. Radio Gabriel at Vanimo in Western Sepik Province is one of these and sometimes operates on shortwave to expand its coverage into nearby Irian Jaya across the border in Indonesia, less than 20 kilometres away.

In Mount Hagen, capital of the Western Highlands Province, both Triniti FM and KBBN Krai Bilong Baibel join with Wantok Radio Light to bring three religious radio programs into the area, which along with even more religious programs on the commercial and NBC stations serving the town, must make the locals very confused as the various faiths each put forward their own interpretations of the Bible.

Throughout the country, you’ll also find a vibrant network of individual music recording studios, and these provide a foundation for the large amount of local contemporary music you’ll find on FM100, Yumi FM, FM Central, FM Morobe and a growing number of other commercial radio stations.

Shortwave listeners may have already heard some of this music from Radio Fly, broadcasting from Tabubil in the Western [or Fly] Province. This station is owned by the large OK Tedi mining company, one of the leading companies behind the current economic boom times.

The state broadcaster, NBC is also expanding its FM coverage of the country as part of a plan to replace its shortwave and AM radio services within a few years. However, there are funding and resource problems and it’s reasonable to comment that the NBC has fallen behind its private sector rivals in recent years.

A visit to their website www.nbc.com.pg brings the encouraging news that the site is undergoing maintenance, but you’ll still find an outdated list of their Karai [or national Voice of Papua New Guinea] and Kundu [or regional] networks.

Currently, they maintain a network of some 18 regional shortwave stations, which can be observed to often operate irregularly because of funding, security, technical and staffing problems. In the past they have had entire studios and tower systems burned down with tribal fighting and land on which their silent shortwave towers stand near Port Moresby was the subject of a complicated lawsuit.

However, their Kundu stations are still the backbone of national radio for the country with much imaginative support from popular local DJs and a relatively small group of technicians who do their best to keep their shortwave, AM and FM services operating to normal schedules.

New concepts such as Tribal FM, a contemporary national youth program heard late every Saturday night are trying to break through the inertia that seems to grip the NBC. But, recent moves to place funding into the hands of the regions has even seen some Kundu stations want to buy new shortwave equipment to serve locals because of their frustration at the delays in rolling out the FM network.

In the meantime, the audience grows, becomes younger and more urbanised, and the focus moves to using cheap mobile phones as FM receivers… FM100, Nau FM, Yumi FM, Wantok Radio Light and other new stations expand their FM networks across the country at a rapidly increasing pace and the economic boom times continue.

Radio in Papua New Guinea today is so much more than some 20 radio stations on the tropical shortwave bands, and when the internet streaming begins to work at websites like that of FM100, listeners around the world will have a taste of the changes now taking place on the radio dial in this wondrous country.

This original feature was researched for the Radio Heritage Foundation and broadcast on the Mailbox program of Radio New Zealand International:

For a our free guides to current shortwave and AM radio stations broadcasting in Papua New Guinea, please use our PAL Radio Listener Guides available online:

For a directory of shortwave, FM and AM radio stations broadcasting in Papua New Guinea and other Pacific countries, we highly recommend the World Radio TV Handbook published annually since the late 1940s. The Radio Heritage Foundation is official WRTH country contributor for Papua New Guinea:

An audio version of this feature is available for downloading and non-commercial and personal research use and rebroadcast without editing:

Download “Papua New Guinea Radio is so much more”

Enjoy a multi-media version of this story on YouTube: 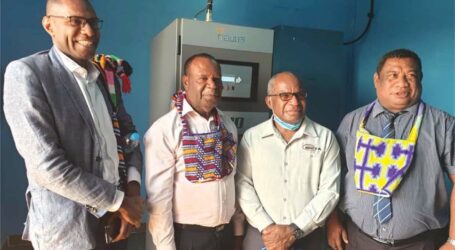