Have more information about any of the 2CA staff listed in this profile [photos, recordings, memories or stories]? Please contact us and help build our on-line virtual archive about 2CA and early Australian radio.

A unit of the MacQuarie Broadcasting Network

Radio Canberra is located at the seat of the Commonwealth Government, being the only Commercial Broadcaster in the Australian Capital Territory.

The original 2CA Canberra was officially opened on November 14th, 1931, by PE Dean CMG, then Secretary, Department of Home Affairs. The owner was AJ Ryan. The Studio and Transmitter were located at Kingston, Canberra. The power was 50 watts. Subsequently, the power was increased to 500 and later, to 2,000 watts. The frequency is 1050 kilocycles (286 metres). The Company now controlling 2CA is Canberra Broadcasters Ltd. The modern transmitter is located at Radio Centre, Belconnen, 4 miles from the Studios at City, Canberra, and 2CA ranks with Australia’s senior broadcasting stations.

The new Studio and administrative building was opened on June 3, 1928 by the then Prime Minister JA Lyons.

PHIL DESMOND A personality announcer of 2CA, returned only recently to the microphone of the Federal Capital’s broadcaster after being released from the Royal Australian Air Force. During service with the RAAF he had opportunities to enlarge his radio experience, since before leaving Australia he came into contact with the leading radiocasters of the Australian Capitals where he was camped. During this period he conducted the evening feature programmes of 4BH Brisbane and 5DN Adelaide, as he had already done on 2CA before enlisting. While in Morotai (Halmaheras Is.) was selected by the affiliate station of the American Jungle Network, WVTL as the Australian News Commentator for the South-West Pacific Area. Among the many bright sessions of 2CA, Phil’s presentations of ‘Tops of the Pops,’ ‘Who,’ and ‘Crosby Croons’ are prominent.

LEN MAJOR Breakfast announcer who is also heard on the Dance programme from 10.00 until midnight on Saturdays. Len has just returned from 31/2 years service with the RAAF. He served both in ground and air crews in New Guinea and the Islands. In that period he produced and compered live artist shows as well as the RAAF Half Hour from 5DR Darwin. Len is well known among Canberra audiences after his eight years connection with 2CA commencing as Boys Club compere at the age of 13 years.

REX MORRISBY has established his popularity among 2CA listeners and sponsors alike. Termed the ‘Marathon’ Announcer he was responsible for and, incidentally, conducts, 2CA’s Sunday Listener Arranged programme heard from that station every Sunday from 7 am until 5.30 pm. This session is claimed to be the longest of this nature on the air. Rex has met many of the ACT Macquarie Station’s listeners while broadcasting community singing concerts.

REG ADAMS is 2CA’s News-Reader and late-morning and afternoon announcer. Presenting music from the lowest of ‘jive’ to the highest of ‘highbrow,’ Reg strives for better appreciation of the different types of music He has been with 2CA over 12 months and his afternoon tea programme at 3.30 has proved most popular. His Saturday morning ‘Jazz Club’ is quite a contrast to his equally-popular Opera Hour ‘ on Tuesday afternoons. Reg divides his spare time between golf, tennis, his musical comedy, colour photography and composing.

GRAHAM CONOLLY 2CA’s evening announcer is a globe-trotter. Before joining 2CA he served during the war as ‘Sparks’ on five ocean-going vessels, one of which was torpedoed under him. Graham is a fine announcer, and he possesses a radio technician’s certificate, which enhances his value to the station. He comperes a weekly organ recital from St John’s Church, Canberra, which is highly popular.

BRUCE STOKES One of 2CA’s popular younger announcers, conducts the station’s luncheon programme from noon to 2 pm Monday to Friday.

One of Bruce’s special features is his Swing session every Friday night.

As a member of the Macquarie Network, 2CA broadcasts the topline features of that organisation, together with local programmes.

Women’s interests are well covered each morning from Monday to Friday. Of particular interest is ‘Coupon Corner.’ The 2CA Children’s Session, a recent addition to 2CA’s programmes, has acquired a fine audience. 2CA’s sporting sessions are popular. As a member of the Macquarie Sporting Service, 2CA secures a complete cover of every worthwhile event. The regular local broadcasts give details of fixtures in the ACT. Regular listening times for everything from jive to opera ensure that 2CA fans know what they are getting and when.

Broadcasting Times: 6 am to 10.30 pm to midnight on Saturdays. It is anticipated that 2CA will shortly resume its 24 hours’ service. 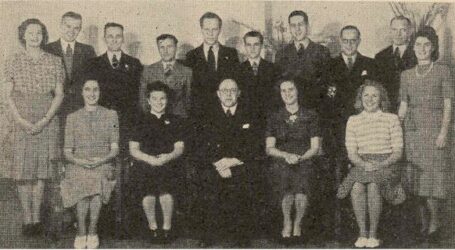 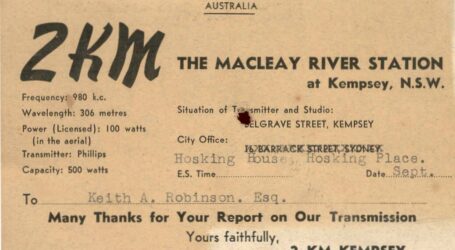