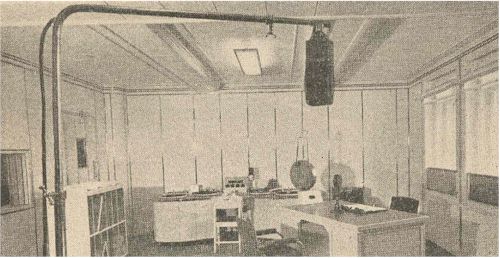 Travelling by fast elevator to the top of the AWA building at 47 York Street, Sydney, a visitor to 2CH is ushered into a spacious foyer from which, through special convex windows, he can view one of the most modern studios in the southern hemisphere. From this elevated foyer one looks down into a studio which is in itself an auditorium.

The main studio of 2CH is fashioned on the lines of the old Baronial halls of England, complete with huge open fire-place and panelled walls. In this studio all the 2CH audience shows are presented. It is insulated from the main structure of the building and features a floating floor, sections resting on pneumatic tubing to provide sound proofing and anti-vibration insulation.

Separate from the main studio is a large working studio – the workshop of the air – from which are conducted the general programmes. It is equipped with modern control panels and turntables to facilitate the smooth presentation of 2CH broadcasts. Incorporated in the equipment are the most modem pick-ups in the world.

A third studio specially designed for talks is finished in charming style and retains an atmosphere of quiet friendliness.

Nearby is located the recording control and instrument room. Fitted with glass panels giving a full view to all studios it enables the producer to watch the progress of his programme during rehearsal and recording.

An instrument panel in front of him gives him control of all microphones in the several studios. From this position the producer is able to control the artists and the flow of sound waves as they impinge upon the microphones. The recording instruments are of the most modern type and include many features exclusive to 2CH.

A programme to be recorded is fed from the amplifiers and filters and finally to the cutting head which drives the sapphire that measures the sound tracks on the master disc.

The record library is as complicated in its workings as a public library. Over 25,000 records are housed in specially designed shelves. The library which is under the supervision of Ron Baggs, has to be ready at any time of the day or night to supply records ranging from ‘a little mouse music’ to music to give the atmosphere ‘ for a wild night on a bare mountain’ (we quote the actual fact). All this music and musical sound effects are tabled and labeled so that it can be supplied as required for any 2CH programme at a moment ‘s notice.

Broadcast presentations are made up of multitudinous programmes, many of which have to be ready a fortnight and three weeks in advance. Then again there are special auditions when sponsors ask for specified music at short notice.

In the planning of programmes 2CH endeavours always to provide a wide variety of entertainment so that all tastes may be served. At almost any time of day or evening live artist, audience-participation, or recorded musical or dramatic shows may be heard in the process of being recorded or broadcast from the various studios. These programmes are sometimes the result of weeks and sometimes months of preparation on the part of the entertainment section. Few people realise the number of persons required for the production of an entertainment such as ‘Fred and Maggie,’ which calls for the engagement of a large number of artists, quite apart from the technicians, script writers, typists, etc, while the recording or broadcast of a musical show, such as a Humphrey Bishop programme, frequently requires as many as 60 artists or more for a single programme. Among these are ‘The Showman,’ presented on Tuesdays at 9 pm and ‘Old Time Music Hall’ broadcast on Fridays at 7.30 pm. Both are Humphrey Bishop shows.

Women’s interests are well catered for on 2CH with sessions conducted by Meg McSpeerin for the 2CH Women’s League membership 20,000) and Hilda Morse, presenting ‘Melody Matinee’ each afternoon.

During the war years the 2CH Women’s League, with Meg McSpeerin in charge, raised over £50,000 for various war efforts and charities. This was disclosed at the league’s Christmas Parties held at the Sydney Trocadero at the close of each year when cheques for large amounts were presented to representatives of various organisations.

Prior to the introduction of travel restrictions, interstate and country tours were a regular feature of 2CH Women’s League activities and plans are in hand for their resumption as soon as restrictions are lifted. In the meantime the league is assisting countless women to enjoy recreations such as golf, tennis and bridge at a minimum cost.

Successful because of its human appeal the ‘Fred and Maggie’ series depicts the humourous side of domestic life, enabling listeners to laugh at all the little exasperating episodes which befall the average every day family. EDWARD HOWELL, as Fred,and THERESE DESMOND, as Maggie, introduced this feature to 2CH listeners in March, 1936, and it made a direct appeal from the start.

In addition to Fred and Maggie many other characters make their appearance in the series, including the evergreen favourites Sproggins (also played by Edward Howell) Daisy Sproggins (MADELEINE HOWELL) and Violet, the nautically minded hired help (played by ETHEL GABRIEL). Tune in Monday to Thursday at 12 noon.

STARS of the SERVICES

Compered by BOB POLLARD, himself an ex-Serviceman, ‘Stars of the Services,’ introduced during the war years, continues a popular attraction on 2CH. Presented now in association with the Australian Legion of Ex-Service Men and Women, the programme is made up by the talent provided by members of both sexes – in the Services or demobilised – who are able to display their ability to entertain. Fees are paid to all who take part, and the programmes, which are under the supervision of DOROTHY WOOD, 2CH producer, have frequently to be planned carefully to fit in with the artists’ ‘leaves.’ In the case of those still in the Services one artist will stand down for another when it is a question of a ‘leave’ cut short. The programme is broadcast every Wednesday from 8 to 9 pm, and it has frequently been the means of enabling members of the Services to embark on a professional career. Bob Pollard also comperes the Saturday programmes ‘lnformation Please,’ at 7.30 pm, and ‘All-time Hit Parade,’ 8.30 pm.

Popular song-hits on discs, played by the best known dance-band combinations and not available through record release houses are a feature of the Song-hit Programme that are a regular weekly feature on 2CH.

Most important from the point of view of swing fans is the 2CH Hit Parade with cash prizes and theatre tickets for those who correctly forecast the order of popularity of the week’s song-hits. First unit of ‘Saturday Afternoon at Home,’ as compered by Bob Pollard from 2 to 5 pm every Saturday, the ‘Hit Parade’ lists the week’s most popular song hits in their correct order and listeners who do the same win the prizes.

The ‘Hit Parade’ is repeated every Thursday night between 9 and 9.30 pm and is followed at 9.30 pm by ‘Diggin’ the Discs,’ another swing-hit programme in which David Magoffin, the compere, entertains with a variety of popular swing numbers.

‘All-Time Hit Parade’ is another novel 2CH feature scheduled every Saturday at 8.30 pm. Bob Pollard is the compere, and during the following half-hour recalls the song-hits of yesteryear, some which were popular long before the advent of swing, are sung by present day singing stars who are also heard in the hot favourites of only a year or two ago.

CHARLES STANLEY, first joined this station in 1936 as the 2CH Good-morning Man and continued in that capacity until he entered the RAAF in 1942. He appeared in many productions on the legitimate stage before entering broadcasting. After an absence of three years, most of which he spent on active service overseas, Charles is back at 2CH.

MEG McSPEERIN, Organiser of the 2CH Women’s League, now supervises the activities of 20,000 women who have obtained membership of this organisation. The league’s war time activities are referred to elsewhere and Mrs. McSpeerin is now supervising its peacetime plans including many charitable objectives. The league aids women in following many indoor and outdoor recreations. Those who are interested should contact Meg McSpeerin at 2CH.

BILL WEIR, chief night announcer on 2CH came originally from Glasgow, Scotland, but has spent many years in this country. He first entered journalism, and because of his voice was subsequently chosen by the Country Press and Australian United Press to conduct the dictaphone service, supplying news to 56 country newspapers. Early in the war he enlisted and served with the AIF in the Middle East, joining 2CH after his discharge in 1943. He has been on the staff ever since.

MAY SHARPE, 2CH pianist and entertainer. Associated with the entertainment world over a long period May went abroad early in 1938, and just before the outbreak of World War II, she found success as a featured pianist in a circuit covering Berlin and southern Germany with every prospect of touring Europe for some years. The outbreak of war changed all May’s plans and she returned to Australia to join 2CH.