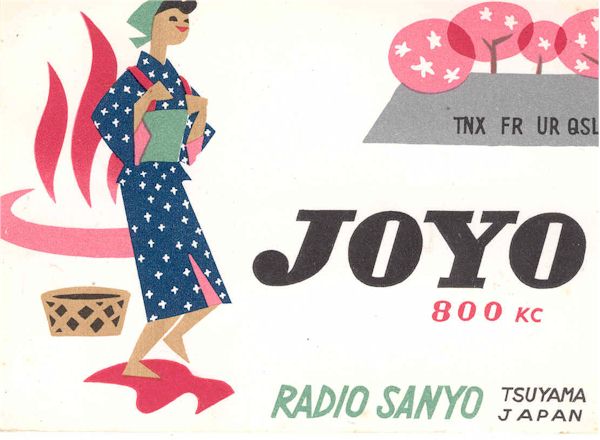 Japanese radio stations have created and supported a spectacular body of commercial art work since the early 1930’s, and this introductory article celebrates some of the themes that flow through this cultural storehouse.

From the early days, Japanese broadcasting has been well developed to cover the islands and a coverage map from 1933 shows a network of 33 stations linked by telephone and carrier current telephone lines.

These were private stations, serving individual towns and cities, and there was intense pride at the technical capabilities of each one.

Some of the early art designs placed a focus on the broadcast towers, such as these two examples from 1933.

These two designs used photography as part of their construction, one with a montage of modern looking studio buildings and tower systems of the times, the other with an early aerial view of Hiroshima.

Later Japanese radio station art also included some photography from time to time, but the real focus has to be the original art work which features abstract objects, colorful caricatures, scenic views, fruits, animals, portraits and some traditional Japanese characters.

A very early example is this beautiful parrot from one of the main Tokyo stations. It was issued as a postage stamp like design, incorporating the call letters, and was affixed to postcards mailed from the station to listeners overseas.

At the same time (1933), the Japanese icon of Mt Fuji appeared on this listener confirmation card (QSL) issued by a station in the city of Shizuoka. Mt Fuji features in a number of designs used by stations in the decades since.

Japan has developed a whole genre of cartoon characters, often based on traditional designs, and the use of such cute art can be found from the period immediately after the Second World War.

In fact, the period 1945-1955 brings out a flowering of such designs, as well as quiet country scenes. It’s almost as if there was an unspoken choice to use soft images as the country faced its first decade of reconstruction.

Remarkably, a large number of radio station facilities were largely undamaged between 1941-1945, and broadcasting in Japanese was encouraged.

From this period, here are two examples of traditional characters who appeared on a series of postcards issued by the national public radio network known as NHK.

More abstract characters also began to appear in this period, such as this one, a colorful fellow radiating the broadcast programs of JOBR for all to hear across Japan.

Perhaps one of the icons of a peacetime Japan has always been the blossoms of the cherry tree.

In the very early 1950’s, a beautiful design was introduced by NHK and it features gorgeous cherry blossom trees flowering over a stone bridge as a lone fisherman glides silently past in the background, the lights from several traditional homes on the shore shimmering on the quiet waters.

Unlike many other countries which put the focus of their radio art work on the station call sign, the Japanese stations made a real effort to create stunning works of art, with the call sign taking a lesser role.

Two wonderful examples from the mid-1950’s are these very attractive young Japanese ladies who promote relay radio stations found at small port towns around the island of Hokkaido. You can see that each design also includes a port scene.

Let’s stay on Hokkaido for our next piece of art, and here we have a bucolic country scene of happy cows munching green grass in the shadow of the radio station tower. No doubt the cows produced great tasting milk as they enjoyed their ‘country’ music near the city of Sapporo.

Now, moving southwards down the island chain, here’s a childlike painting of a peaceful seaside scene, with happy people, little boats and houses around a bay.

The location is the Minami-Kannon Coast, and what makes this design so special is that this area is better known as Hiroshima, only a decade after its devastation by an atom bomb.

The late 1950’s and early 1960’s saw a widening range of abstract style designs, as part of an international trend. There are many Japanese stations which used such art work. Some stations brought out a series of different designs to promote themselves.

These colorful examples are of buildings, fruits and other objects.

International trade has always been at home in the port city of Kobe, and this next design manages to bring together images of the modern local radio station, a busy street scene, and a flagpole with nautical ensigns and national flags, all topped off with the flag of JOCR.

Before ending this brief introduction to some of the Art of Radio © Japan style, let’s see another typical 1950’s style design, and also move forward to the 1980’s to look at a more recent example of design from one of the major Tokyo AM stations.

These images barely scratch the surface of the wide range of icons, images, abstracts, montages, spirals and much more that Japanese radio stations have used to promote their unique identity for more than 75 years.

We’re grateful to Eric Shackle and Keith Robinson for making their extensive collections of Japanese radio ephemera from 1930’s – 1990’s available to us, and to the unknown artists who have created such a stunning and colorful gallery of designs.

We also acknowledge with special thanks, the individual radio station staff and management throughout Japan who have commissioned the art work and made it accessible to their audiences over so many decades.

If you have more information about any of these images, in particular the artists who created them, please contact us. Also, if you have any comments about this article, and this series, we want to hear from you. 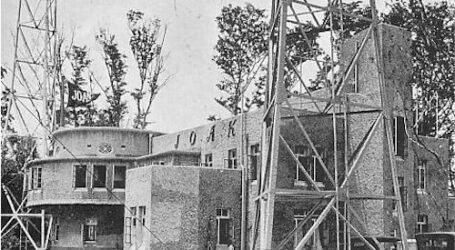