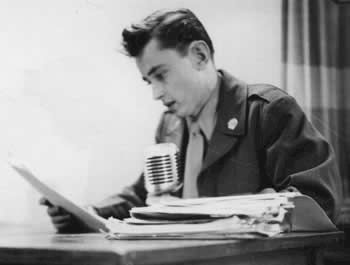 Let me tell you how I got to Radio Tokyo. I’m really a very lucky guy… have been all my life. This is just one of many stories that attest to that.

All troops entering the Pacific Theater or going home seemed to move through the 4th Replacement Depot at Zama, Japan. This had been the country’s West Point. Now… my army records showed that during the last two years of high school I’d worked the night shift as an announcer at WJLB in Detroit, Michigan. 4,999 infantrymen left Zama for Hokkaido. That rumor turned out to be true. But, I was pulled out, assigned to I and E, the Information and Education detachment. They needed someone to read the news each day over the camp’s loudspeaker system. How’s that for duty?

Let me try to recreate what it was like at Zama. The winter of ’45 wasbitter… really cold … with a wind that cut right through you. About eight of us slept in a large room with windows that almost reached the ceiling and that was about ten feet high. The only heat came from a small coal stove provided by the U.S. Army Quartermaster Corps. Hard to believe, I know, but there had been a foul-up. A shipload of these stoves had arrived in Japan. Each one with a connection to a section of stovepipe to carry smoke out of the building. The stoves had arrived… the stove pipes were back in the States. With typical Yankee ingenuity GI’s roamed the countryside scrounging for whatever they could find to get that smoke out.

Our army cots were placed in a circle… feet as close to the coal stove as possible. A measure of the cold can be found in how we prepared our cots for the night. First… a layer of newspapers, then an army blanket, followed by your sleeping bag, covered by another blanket if you had it, and topped off by tying the arms of your overcoat to the foot of your cot. Crawl into the sleeping bag… zip up… and dream of home.

It didn’t take long to discover WVTR and Radio Tokyo. I made the right contact… an interview and audition were arranged… and the 4th Replacement Depot couldn’t argue with a request from GHQ… MacArthur’s headquarters in Tokyo.

What was it like? Well, it certainly was too early for any American influence. This was Japan… the real Japan. Our fire bombing of their capitol had been very successful. The city was 60 to 65% destroyed. There was rubble everywhere.

I’ve got a picture of Jack Faulkner, another member of the WVTR staff and myself standing on the steps of the building that housed the station. That building was a survivor… it stood in downtown Tokyo… in good shape. If memory serves me correctly it was within walking distance of the Emperor’s palace. I don’t mean the Dai Ichi building and GHQ… I mean the other Emperor.

So I joined the WVTR staff… low man on the totem pole. The fact that I was able to move up in seniority quickly had nothing to do with ability, but everything to do with the mad dash to get home… back to the States. People were scrambling to get out. Secretary of War Patterson had decreed the point system would be used to determine when you’d get to return and be discharged. Points were earned for time served overseas.

Our Program Director, Sgt. Hans Conried, was my immediate superior. Hans was a great guy to work for and with. He was a well known eccentric Hollywood personality. In the forties, prior to the advent of television, seats in the audience of radio shows were in demand. As a teenager visiting family in California I had been in a radio audience and seen Hans at work. The year was probably 1942. So, working with him in Tokyo was a real treat.

I can relate a great story about Hans’ arrival at the station when it was on the island of Leyte, in the Philippines.

When Hans arrived at the station on Leyte the staff was baffled, unsure of how to handle him. What could they do with this strange Hollywood actor? The decision was made to let him try the morning show . . the wake-up call . . . spinning records. That didn’t last long! His show generated a tremendous uproar! Hans loved classical music and was a devoted fan of Gilbert and Sullivan. He fed the GI’s a morning disc jockey show of Beethoven, Brahms, Mozart and the Pirates of Penzance!

After some headscratching they did come up with an assignment that fit Hans to a T… reading the comics to the troops!

I don’t remember his ever going on the air in Tokyo. I guess as Program Director he didn’t have to. I do remember him sitting on his bed doing yoga exercises. Hans was also an art collector… a genuine connoisseur. Tokyo in 1945 presented a great opportunity to pick-up unique pieces.

From time to time we received rations of beer and cigarettes. Since I used neither I could give my beer to my buddies and use the cigarettes as barter. I’m reminded of this almost every day. Our studio boasts a beautiful five foot painting on silk. It captures the image of a tiger moving down a jungle path. I first saw this work of art on the Ginza or what had been the Ginza, the Rodeo Drive of downtown Tokyo. There was no sidewalk… no street… just rubble. This artist had cleared a small area and laid his painting down with pieces of concrete holding each corner. I bought that work of art for two cartons of cigarettes.

Just about everyone on the WVTR staff held a lower rank than their job should have called for. So we all had this personal beef with our Commander-in-Chief, General Douglas MacArthur. We served as part of GHQ. And since we had no Table of Organization, whenever an opening in grade occurred which meant an opportunity to advance in rank… that translates to more pay… we were by-passed and the opening given to other units. When I was Chief Announcer I made an effort to get GHQ’s attention. I scheduled myself on the sign-off shift for a full week and read the standard closing copy of the broadcast day placing extraordinary emphasis on GENERAL Douglas MacArthur. This is PRIVATE Shelby Newhouse signing off.

That reading never generated a response from GHQ, but it did produce evidence of how popular WVTR was with the troops. They listened right up to the moment we went off the air. This became abundantly clear to me sometime later… on my flight back to the States. Each leg of the journey ended on an island… like Guam and Johnson. Before getting back on board there was the inevitable roll call. When they reached my name the assembled GI’s would sing out, “That’s PRIVATE Newhouse” !!!

Many of our shows originated from the same studio used by Tokyo Rose. I recall a truly memorable broadcast that seemed particularly appropriate for that studio. One of our daily chores was to read the news to stations down the line. We’d read very slowly, repeating every line so the news could be typed or written down by hand and later read by someone at that station. There had no recording capability at the receiving end.

On this particular day the assignment fell to an announcer who was suffering from the GI’s! In some quarters its called dysentery. At one point in the broadcast he made an executive decision. Moved a waste basket over… sat on it… and, whenever nature called, he just turned off the mike.

We probably could make acetate recordings in 1945, though I’m not certain about that. But, ’45-’46 must have predated wire recorders and magnetic tape was further down the road.

You know, we had a marvelous shoulder patch worn just above the Eighth Army insignia. Mine disappeared over the years. I wish I had it now. It was curved to fit the top of your shoulder… sewed with gold thread against a black background. I believe it said Armed Forces Radio Service… but it was so far back… I’m not sure.

At that rate if I’d only served another six months I’d have looked like Audie Murphy.

These have been some of my recollections… memories of WVTR… of Radio Tokyo… 1945-46.

This is Shelby Newhouse… Private… signing off. 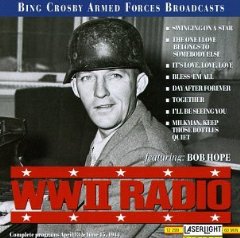