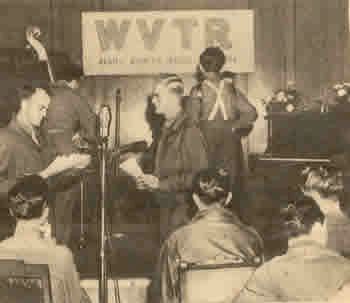 [By] Pacific Stars and Stripes

Music, comedy, drama, news, sports and special events programs fill the airwaves as the 18 stations of the Armed Forces Radio Network broadcast the tops in radio entertainment to occupation troops in Japan and Korea.

Taking over the number two network of the Japanese Broadcasting Corporation, the original Armed Forces Radio Network went on the air in late September operating as a seven-station network with a skeleton staff. With additional facilities and personnel made available, the network soon increased to its present 18-station hook-up.

The first station to be set in operation was WVTR, which took over the facilities used by the former Radio Tokyo, Station JOAK. The Tokyo station, which is a 50,000 watter at 590 kilocycles, serves the Tokyo-Yokohama area, and, in addition, feeds programs to the member stations of the network from 6.30am to 11 pm.

As occupation troops moved inland into Japan and Korea, 400-watt mobile radio stations moved right along to supply the men with their favorite radio entertainment. Today, for the most part, the Armed Forces Radio Network is using fixed stations assigned to the Americans in those cities where two or more Japanese stations had been operated, leaving one station for use by the Japanese.

Many of the stations of the Armed Forces Radio Network are assigned to large units performing occupation duties. Many such organizations broadcast the shows produced in Tokyo in addition to airing their own locally produced shows.

Rounding out the 16½-hour network broadcast schedule are the more and more live shows that are being produced locally by the Armed Forces Radio Network. An experienced staff of announcers, scriptwriters, producers, actors and engineers strive to place locally produced shows on an equal par with Stateside network productions. Many of the men now with army operated stations throughout Japan and Korea were ‘name’ radio personalities in civilian days.

Among some of the locally produced shows are ‘On the Air’, a half-hour variety show featuring talent from the 97th Division, the Fifth Air Force ‘Grounded Gadgets’ program, the weekly quiz stumper ‘Date With Your State’ broadcast from the American Red Cross Club in Tokyo, and ‘By Lines’ which presents by-line war correspondents now in Japan telling of war experiences and the stories they have covered.

Also live talent musical programs such as ‘The Sophisticats’ a thrice weekly recital by concert pianist Claude Frank, and the songs and piano playing of Walt Jeffries. The latest records made by America’s name bands are heard on the daily hour-long ‘Tokyo Mose’ show, the early morning ‘Rise and Shine’ stanza and ‘Rhythm and Romance’. Addicts of hot jazz get their fill with such shows as ‘Off the Record’ and ‘Gems of Jazz’.

News stories from AP, INS, UP, ANS and the shortwave stream into the newsroom of the Armed Forces Radio Network in Tokyo, where news is edited and re-written for radio delivery four times daily at 7.30 am, 12.30, 6.00 and 10 pm. Unit newspapers throughout Japan and Korea receive their news daily at dictation speed over the network’s facilities.

Late sports news, interviews with sports stars and broadcasts of Stateside football games are regular features of AFRN. Special events draw particular attention of the network as radio remotes and wire recorders reach out to the scene of action to give network GI listeners a first-hand account of special activities.

One thing is certain: Whether you’re listening to WVTR in Tokyo, WVTP with the 24th Corps in Korea, or your dial is set to WVTQ in Osaka or any one of the network’s 18 stations, and that is – GI’s in Japan and Korea are receiving the best in radio entertainment – over the Armed Forces Radio Network. 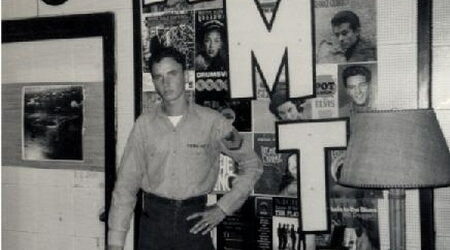 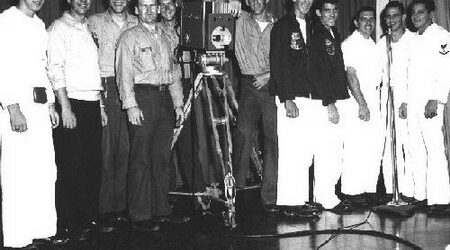