WIRELESS waves have taken Samoa by storm. Radio 2AP, non-existent a year ago and established by the late Major E. Lloyd, formerly of 2YZ Napier, ranks as one of the achievements of the New Zealand administration in Samoa. On any of the five nights a week on which 2AP is on the air, from village to village throughout Samoa, at least two-thirds of the inhabitants are listening. There is no newspaper in Western Samoa except for a daily foolscap administration newsheet, a hundred or two copies of which are duplicated and circulated around the town of Apia.

Major Lloyd was a man of wide island experience. I first ran into him in Fiji during the war, where he was commanding the School of Instruction at Vatukoula. He was well known in Christchurch before the war as the original Professor Speedee of the 3ZB Quiz sessions. From Fiji he moved on to Tarawa, Canton and Ocean Island, as an officer of the Western-Pacific High Commission, and his recent death was a sad blow alike to his friends, the Broadcasting Service and, the administration in Samoa.

During the day he administered the radio station and at nights announced the programmes that he had concocted by day. In his spare time he saw his wife. However, shortly before my arrival he devised a cunning arrangement whereby he would see more of her. Certain set programmes which come from New Zealand were running short as the Matua had been off for three months’ overhaul. The Children’s Hour was the particular shortage. So Mrs. Lloyd was detailed for an audition – and told she had better be good. She satisfied a critical husband and was soon running a Women’s Session to boot, featuring as a sort of hybrid Aunt Daisy-cum-Christopher Robin.

Stahlin, the Samoan announcer, is a fluent bilinguist, and he daily translates the news, foreign and local, into Samoan. I had personal experience of the effective nature of messages put over in his Samoan hour. My own arrival at the hospital was mentioned in the local news, as opticians are rare objects in Samoa. Within a couple of days, and before my equipment was unpacked, Samoans were in from out-lying islands to see me. Subsequently, I put several messages over the radio to patients in distant parts and they were invariably received. I had previously been sceptical of the value of radio messages. For many years I have been a student of police messages. I have never yet seen the green Ford tourer with the dented rear mudguard and the right number-plate. However, my scepticism has been jolted. Samoans certainly listen to their radio.

THE broadcasting station itself is situated at Mulinu’u, a mile along the beach from Apia, and, appropriately enough, near the Fono House, or Samoan parliament. “Fono,” which is not related to the “phono” of phonograph, means “council,” though I suspect philologists could develop a thesis, on the connection. The station has a large main studio, a couple of smaller ones, record store, offices and, of course, the inevitable room. chock-full of gadgets. Mulinu’u relays the programmes to the transmitter at Afiamalo, seven miles back in the hills. Programmes are actually broadcast to the transmitter on shortwave and are not sent by cable. Cables require heavy maintenance in the tropics – and they make excellent clothes lines. From Afiamalo the programmes are retransmitted on broadcast. I will leave it to the experts to ponder how any self-respecting wireless wave, short or long, finds its way through seven miles of jungle, 200 inches of rainfall, climbs 3,000 feet to Afiamalo, and then gets back again.

The staff at the transmitter consists of Afa, the Samoan rousabout, and Cam Turner, the technician. Turner, in typical island style, had gone to Samoa nine months previously to relieve for three months. He was studying for his A.M.I.E.E., and I frequently envied him the application that could keep him grinding away all day on the lawn under a flamboyant tree. Solid swotting in the tropics is not easy. Eventually the fatal day of the examination came. Arrangements had been made for the postmaster to act as examiner. At nine o’clock Turner duly arrived at the post office and Mr Taylor solemnly broke the seals of a very confidential package from Island Territories. They had enclosed all the instructions for the conduct of the examination, everything in fact except the examination questions themselves. This was a bitter blow, as being an English examination it would mean waiting another year. However, they contacted Wellington, and within a couple of hours an operator at the radio station was copying down a complicated paper on electrical engineering, with numerous technical diagrams. It took ten hours’ work at the keybaord to complete. Eventually Turner started his examination at 10.0 p.m., finishing at about 3.0 a.m. After the marathon effort of the operator and Turner’s ordeal of waiting, I sincerely hope he got through.

THE Broadcasting Service features the meetings oi the Legislative Assembly. Parts of the sessions are broadcast – as in New Zealand – and the standard of debate is no higher, or lower, than is usual here. Further, the speakers are recorded on the studio’s tape machine. This is afterwards played back at appropriate speed to the Government typists concerned with the production of the Samoan Hansard, an irregularly published periodical which makes instructive and frequently humorous reading.

The radio has become immediately available to all Samoans. True, not many Samoans actually own a set, but there is one Government set in each village, usually in the fale of the fa’a pule, or headman of the village. The Samoan house has open walls – there is no privacy in the European sense – and the village just gathers around at listening time and listens. It would be very interesting to evaluate the total effect for good or evil of this new feature of Samoan life. Certainly a heavy responsibility rests on the shoulders of the admministration and the Broadcasting Service. 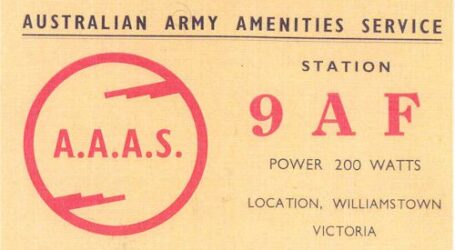