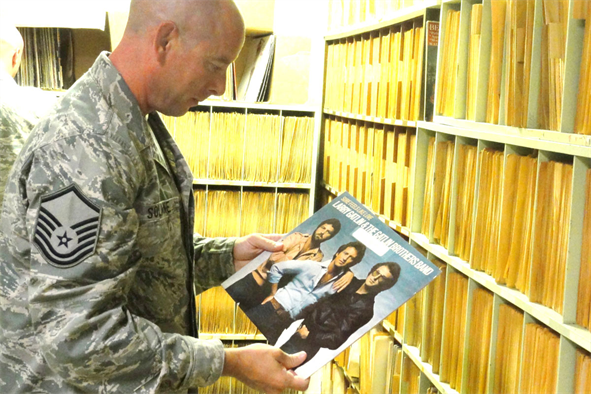 Master Sgt. John Solane, 611th Detachment 1 contracting quality assurance specialist, looks at a Larry Gatlin and Gatlin Brothers Band album called “Sure Feels Like Love,” at Wake Island Airfield, Aug. 30, 2011. The yellow sleeves in the cubbies around him contain AFRTS-distributed records, which are copyrighted to protect the artists who gave the military authorization to use their recordings overseas for free. © U.S. Air Force photo/Capt. Amy Hansen

WAKE ISLAND AIRFIELD, Alaska — In a tale straight from an adventure book, personnel stationed at Wake Island Airfield in the mid-Pacific recently stumbled upon a vinyl record collection with an estimated value between $90,000 and $250,000.

The 611th Air Support Group’s Detachment 1 is now making a comprehensive effort to preserve the nearly 9,000 vintage vinyl records and ship them to their rightful owner, the American Forces Radio and Television Network in Alexandria, Va., according to Master Sgt. Jean-Guy Fleury, infrastructure superintendent, who took over the project from the former Detachment 1 commander, Maj. Aaron Wilt.

No digging was required to access this treasure, as the records were cataloged and neatly organized on shelves in a small room on the second floor of the Wake Island Airfield base operations building. The door was conspicuously stenciled with the name of the radio station, KEAD, and a restricted area warning, which kept most people out.

“That’s a locked room normally, but people in my department have known the records were there for years,” said Colin Bradley, communications superintendent with Chugach Federal Solutions, Inc. CFSI is the contractor that currently manages operations on Wake Island with the oversight of Air Force quality assurance personnel.

“Because of the completeness of the collection, I assumed it was quite valuable. I have not run across a collection that well preserved or that intact in my career. It’s a little time capsule,” he said.

The collection includes a variety of vinyl albums and records specially made for military audiences and distributed monthly by the American Forces Radio and Television Network, as well as some commercially available records.

“In 1942, the American Forces Radio Service was started to get American music out to the troops overseas,” said Larry Sichter, American Forces Network Broadcast Center Affiliate Relations Division chief. “Some of the radio productions were original, like GI Jill and Command Performance, and have significant value.”

The exact dates the low-powered AM station operated on Wake Island remain unclear, but Mr. Bradley shared his estimate. “I would guess that [KEAD] started in the sixties due to the dates on the records. Also, the FAA controlled Wake Island until the mid-60s, so an armed forces radio station wouldn’t have been here. I would guess it wrapped up maybe in the 70s or with the advent of satellite radio.”

According to a 2007 entry by Patrick Minoughan on www.richardsramblings.com, KEAD was already around in 1963. “I was stationed on Wake Island from Jun 1963 to Jun 1964. Yes indeed there was a Coast Guard Loran Station on Peale Island and it was run by a great bunch of guys. On the second floor of the then new terminal building was a very small AFRTS radio station. AFRTS had no personnel there but sent in monthly shipments of music. While I was there one of the Communications guys named Steve Navarro would do a daily show for a couple of hours. When it was unattended anyone could go in and play the records which were broadcast on the island,” he wrote.

According to Mr. Sichter, AFRTS was able to get permission to use the work of many artists, and later actors, for free. Therefore, the records were copyrighted and only to be used for their official purpose of entertaining the troops overseas, and then returned to AFRTS.

Since Wake Island Airfield is a tiny 1,821-acre atoll located about 2,000 miles west of Hawaii and 2,000 miles east of Japan, it is possible that the cost and logistics of returning the records to the mainland were prohibitive at the time the radio station was shut down.

So now, about 30 years after the last record was spun on KEAD, Master Sergeant Fleury is spearheading the operation to ship the records back to AFRTS. He has estimated that it will take approximately 75 16-inch by 16-inch boxes, and a total of about $10,000 worth of specialized material to properly pack up the records. AFRTS is providing the materials, and Detachment 1 will do the packing, he said.

According to Mr. Sichter, the records will be used to fill any gaps in the American Forces Network local museum, and the rest of the collection will be entered into either the Library of Congress or the National Archives to become a permanent piece of U.S. history, accessible to all.

However, the tradition of using radio to entertain and inform the people on Wake atoll does not end with the departure of the records. There are currently about 133 people who live and work on Wake on unaccompanied tours, including four military, 19 American contractors working for CFSI, and about 110 Thai CFSI workers. In such an isolated environment, entertainment and news from home is a big morale booster.

“We provide radio and TV services for both Americans and Thais out here,” said Mr. Bradley. “Without them, people would find the passage of time more difficult.”

“Our communications folks maintain four FM satellite radio stations on a volunteer basis,” he said. “The satellite equipment was supplied by AFRTS a long time ago with the advent of the ‘Direct to Sailor’ distribution system in the Pacific.”

As nice as it was to have AFN radio and TV stations on Wake, the local flavor was missing after KEAD stopped broadcasting.

“Radio is a local medium, so people go to the radio for local information,” said Mr. Sichter. “There is much more immediacy with radio.”

Then Robert Brooks, CFSI fire chief, and Melissa White, CFSI work control supervisor, came up with an idea. “We started a year ago, looking for ways to entertain people,” said Chief Brooks. “I was a licensed wrestling promoter from 1987-2000 in Illinois, so we decided to do a classic professional wrestling show.”

Now Chief Brooks and Mrs. White co-host a live radio show twice a week on the island’s local radio station, 104.5 “The Quake”. The show is called “Classic Professional Wrestling” and features interviews with wrestlers who were popular in the 70s, 80s, and 90s, like Terry Funk, Dr. X, and Blackjack Mulligan. Local announcements usually follow the show to keep Wake’s residents informed about safety items, scheduled activities, and island news. When the show is not on, 104.5 broadcasts music from a locally-managed computerized play list.

“It’s a hobby for me; it’s fun and a morale booster,” said Mrs. White.

For Chief Brooks, the show is a passion. “I love classic professional wrestling,” he said. That passion resulted in the show being picked up by an internet radio site, www.unlimitedradio247.com, which broadcasts worldwide.

“Now we have listeners across the world,” said Mrs. White. “People from Japan wrote in to say they listen.”

So, just like when KEAD was operating, the spirit of the amateur radio host lives on at Wake in Chief Brooks and Mrs. White. Even though Detachment 1 is shipping hundreds of thousands of dollars worth of records back to AFRTS, perhaps the real treasure will remain in the people who love and carry on the tradition of local radio on Wake Island.

KEAD broadcast on 1490 AM from Wake Island in the 1960’s and 1970’s. Wake Island has a 3000m runway and is managed by the U.S Air Force as part of missile operations on Kwajalein in the Marshall Islands. If you have memories, stories, photos or audio about KEAD please let us know so we can share them as part of our AFRS coverage of the Pacific.