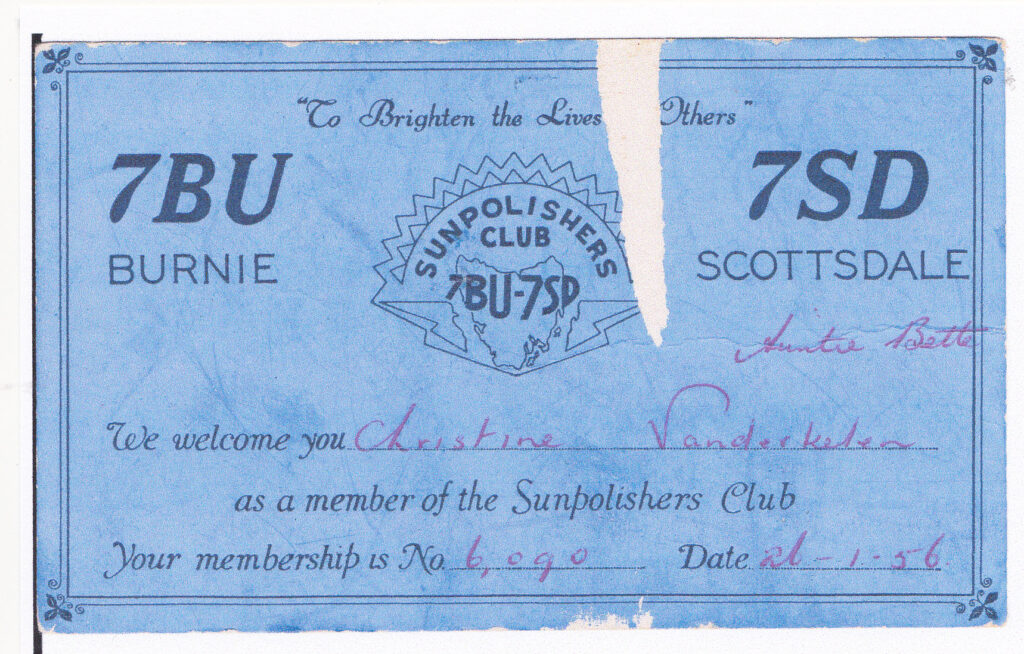 Like one of more than 100 listener clubs which mushroomed during Australian radio’s golden era, the Sunpolishers Club was a “must listen to” program on Radio 7SD Scottsdale says former ABC Tasmania radio journalist Brad Saunders who, like several of his cousins, was not only a Club member but sang on air.

“I recall my first time on radio doing a slightly squiffy version of “This Old Man he played One” in the 1950s before I was introduced to a Nagra tape recorder and the business of interviewing people for a living on radio.”

Now farming in Tasmania’s north-west, Brad recalls his on-air debut alongside his cousin Deidre Hall who sang Tammy, the theme from the 50s movie of the same name.

They were not alone as grandchildren of a Scottsdale farming couple, Tom and Isabelle Hall, in having been active Club members and on-air performers.

Other cousins, Reevas and Trudy Hall also sang while my sister Christine and I were signed-up Club members who tuned into 7SD each time a family holiday bought us to Scottsdale from Melbourne.

Before the arrival of television in the then somewhat isolated north-east of the state the Club epitomised the Scottsdale based Station’s slogan “the Voice of North Eastern Tasmania” and the Club’s objective of cheering up the sick or distressed in the listening area and actively fund-raising for charitable causes.

Having originated in the north-east on 7DY which used to serve the mining community of Derby, in 1954 that station’s licence was transferred and the Sunpolishers Club moved to 7SD in nearby Scottsdale. Ultimately membership of the Club in Tasmania exceeded 11,000, drawing on listeners through other stations such as 7BU and 7AD in the State’s north-west.

7SD station manager Bert Scetrine was known on the Club as Uncle Bertie and he put on a funny voice to make various announcements.

“The kids thought this was good-oh, a bit like a radio version of a cartoon,” Brad says.

“One of the highlights of the year was listening on one’s birthday when greetings were sent to ‘Sunpolisher Bradley Saunders celebrating his 6th birthday today.’”

At other times family members would front up at the station’s King Street studio, for a live performance.

“We had to go to the station the day before, a Thursday, for a rehearsal and the next night it was live from 5.30pm. It was very scary,” Brad says

“But there were rewards. Bert Scetrine’s mother, known as Auntie Al, played piano and backed the kids brave enough to sing. For your performance you received a bottle of Abbotts cordial.

“‘When thirst is first, say Abbotts please,’ Uncle Bertie would announce as he handed out the bottles.

“It was a wonderful time. After one’s voice was heard over the airwaves, teachers, relatives, peers and others would often offer compliments on your performance.”

Reevas Hall recalls her prize was a bottle of creaming soda.

“Cousin Trudy was a better singer than I was. Mrs Scetrine used to play the piano and Brad’s cousin, Gaye Dakers was also involved because her Mother worked at 7SD.”

“Bert was a wonderfully community-minded man which was obvious from his time at 7SD. He also provided public address systems for community events as well as ferrying his mother to the venues where she performed with us in a cabaret band for many years. He would also set up a p.a. at these functions. I don’t think he was ever paid for this but I believe he received some sort of honour for his work in the community before he died.”

Radio it seems was in the Scetrine genes as Brad also recalls a son, Jimmy Scetrine, doing programs on 7SD when he was quite young.

Originally 7DY Derby opened on February 26, 1938 and went off the air because of a storm in late 1951. Because of a bad local economy and falling population caused by the closure of local mines, the station moved to Scottsdale as 7SD which opened officially on July 26 1954. The original 7DY Sunpolishers Club had 2,900 members and the club was jointly run with 7BU Burnie which was also operated by the Findlay family, and where the club had 11,000 members by 1947 and was still popular in 1958.

*We recommend the limited edition book ‘Australian Radio History’ compiled by Bruce Carty for the incredible story of 600 AM radio station call signs and much more about Australia’s radio history right up to 2015.

*Beautifully illustrated with many colorful station logos, and featuring popular Australian Music Charts compiled from the 1920’s to 1979.

*Radio trivia collector’s heaven with a wealth of detail that goes behind the scenes of hundreds of radio stations, personalities and events.

*Each copy is personally signed by Bruce, who at 13 was Australia’s youngest DJ on Radio 2KA Katoomba.

*Less than 20 copies left… Buy yours today and don’t miss out.

Sorry, print copies are sold out but a free eBook version is available to download here.

7SD now serves Scottsdale from studios in Launceston having closed down local operations from its former Scottsdale based studios. 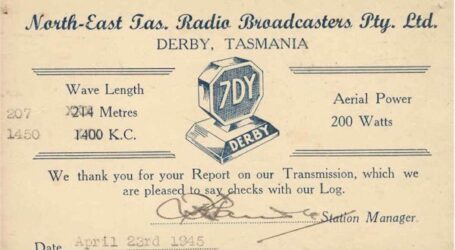