Can’t wait to move back to Chch

Immediately following the February quake we were incredibly thankful we’d moved from our townhouse in Hereford St to a rented property in Redwood.

With power, phone and internet still running we were able to provide food, washing and shower facilites for friends and family, plus I was able to run our radio station, 105.7 Pulzar FM, from my small studio remotely.

We had the breakfast team crammed together every morning recording audio and uploading it to our remote studio computer, giving us a delayed live presence, which was great for our audience when every other radio station was broadcasting from Auckland.

Unfortunately we took a large personal hit from the destruction of Malbas Nightclub, where I DJed three nights a week. This made up over half my income, and once the Government subsidy ran out I had to beg my other employer for additional hours to make up the difference. They obliged for several months until June, when I was told my role was being moved to Sydney and I had the option of staying in Christchurch with effectively no job, or relocate to Sydney for a full salaried position.

So, like many other friends, we made the call to jump across the ditch to Sydney. I’d always said I’d never want to live in Sydney or Auckland (possibly Melbourne if it ever came to that), but Sydney was where the job offer was so move we did.

We’ve now been here for 18 months and miss home immensely. We’re managing a trip or two back a year, but it’s not the same. The cost of living is extremely high here, and with a mortgage still in Christchurch and additional debt, we’re finding it really hard to get ahead. Thankfully I’ve been able to get some DJ work here in Sydney also, and now enjoy performing for events like the Waitangi Day Barefoot Bowls, a delightful taste of home.

I’m currently studying project management in the hope of gaining a certification so I can get a better job when we do return to Christchurch, hopefully in a year or two. Our goal is to be back home before our daughter starts school. My dream was that the radio station under its new management would do amazingly well so we’d have a job to come home to – sadly it doesn’t appear that’s going to be the case.

As for Pulzar FM, it’s struggled along without my direct involvement. Pre-quake we had things rocking along, I was able to work at the station for 20 hours a week for free thanks to the way I’d structured my diversified income, and that was destroyed by the quakes.

The Friday before February 22 we’d hit our target sales goal for the first time since our Canterbury wide launch in April 2009, and were celebrating that fact. Things looked great. Then February 22 happened and eventually due to poor trading we were forced off air in December 2011 (when a sale offer fell through) and relaunched in October 2012. The trading climate doesn’t appear to have improved yet, making it exceptionally hard to get any momentum, causing more stress for the directors and staff. But we’re ever hopeful.

Hang in there Christchurch, hopefully we’ll be home soon.

© The Press February 21st, 2013.
This material remains © Fairfax New Zealand Limited and is only to be used for non-commercial personal or research use. Any other use requires permission of the copyright holder. 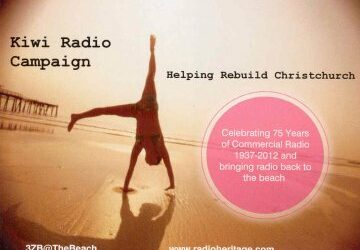