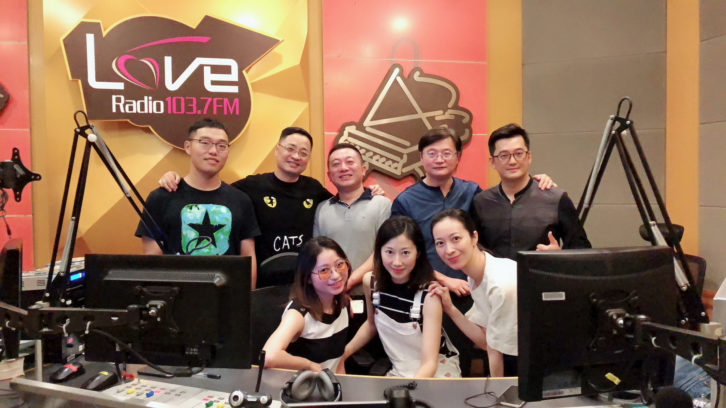 Ming Zhang’s listeners join him in studio for a live Love Radio broadcast.

Since 2005, Love Radio FM103.7 has been playing the best of Chinese and international pop

SHANGHAI — Located on China’s Pacific coast, Shanghai is the country’s biggest city with a population exceeding 26 million people; three times that of New York City (8.55 million). It is also a city that loves its music, and no radio station captures that idea more than Love Radio 103.7 FM.

Launched by the Chinese government’s Shanghai Media Group (SMG) on Aug. 8, 2005, this 24-hour advertiser-supported station plays “local Hong Kong/Taiwan/Mainland music, as well as some international favorites from the ’80s and ’90s and a bit of the 2000s,” explained Love Radio DJ Ming Zhang, who broadcasts on the station under the name ‘David.’ Love Radio’s listeners are males and females 30 to 55 years old, who are “mainly intellectuals” with “above average income,” he said. “Their preference is for more ballads and love songs.”

The “Love Radio” brand reflects the positive feelings that the station’s music format aims to inspire in its listeners. “Love is a wonderful thing, it unites people all over,” Zhang said. “Being loved by others gives you strength and power, Love Radio wants to play that role through music.”

Love Radio’s broadcast studios are located at No. 1376 Hongqiao Road in Shanghai. The station has 14 DJs working around the clock, and produces four major weekday programs in addition to its other programming.

As for the station’s Shanghai market share? “Love is the No.1 music format radio [station] among the mobile population,” said Zhang. “For the overall rating, it ranks at No. 2 after FM 101.7. Since the market share of SMG Radio is over 98% of the whole, Love Radio’s market share is approximately over 20% among the target listeners (30- to 55-age bracket).”

A LOOK AT MING ZHANG

In Western broadcasting, education isn’t always a top priority for radio DJs. But the same is apparently not true in China; at least where Zhang is concerned. According to his resume, Zhang graduated from Shanghai’s Fudan University; ranked number 159 by “US News & Global Report” in its list of the Best Global Universities. Due to Zhang’s academic achievements in linguistics and foreign literature, he was quickly recruited to work for the Shanghai Foreign Affairs Office after graduation.

However, it was Zhang’s love of western pop music that saw him become a columnist for “Audio & Video World,” the earliest music magazine published in China after the implementation of the country’s “opening-up” policy in the 1980s. By 1993, Zhang was a guest host on the weekly radio program “Pop Music’s Friend.” This experience spurred him to leave the Foreign Affairs Office for a full-time music DJ position with SMG Radio.

Over the years, Zhang has won “Top DJ of The Year” awards three times, along with other honors. He has also been chief commentator for the annual Grammy Awards in Shanghai radio broadcast since 2000; hosting press conferences and meet-and-greet events for the Rolling Stones, Eric Clapton, Celine Dion, Maroon 5, Beyonce, Christina Aguilera, Backstreet Boys, Linkin Park, Usher and Justin Bieber among others.

From 2015 to 2018, Zhang took part in Europe’s International Radio Festival. As part of this event, he aired the specially-produced “East Meets West” radio series during the morning show for his listeners and those listening in via the IRF.

“East Meets West … introduces classic pop songs with Shanghainese flavor to the international listeners and also broadcasts the interviews that I made in the hosting countries and plays their music to Chinese listeners,” Zhang explained. “For instance, in my first series, I introduced a traditional Alphorn player I met on Pilatus Mountain in Lucerne, because it is the real Swiss sound that I found in this country.”

There are certainly many cultural differences between China and the West. But when it comes down to commercial broadcasting, radio is radio — and the issues that SMG Group and Zhang face in attracting listeners mirror those faced by programmers around the globe.

One issue that stands out is the effect of streaming media on radio listenership in Shanghai. “The biggest impact comes from the advertising,” Zhang said. “Many advertisers are starting to use streaming media rather than traditional radio as means to reach people for their product.”

On a larger scale, “the biggest challenge we are facing right now is how to maintain our target listeners; especially the young generation, since smartphones are often used to enjoy broadcasts over the internet and podcasts,” he said. “People find it much easier to download music than listen to radio shows.”

To counter this impact, SMG Radio has developed its own radio app. It has also launched training courses to improve the professionalism of its radio hosts and editors, and started working more closely with sponsors to produce more effective ads and achieve better commercial placement.

As well, like broadcasters in the West, Love Radio and its SMG Radio partner stations are promoting the human side of radio to its target audiences. “Our music is played with many stories behind it, which cannot be easily obtained through other media,” said Zhang.

A CONTINUED LOVE FOR RADIO

Between his Love Radio work and his many hosting duties, Zhang is a very busy man. Yet his love for pop music and radio remains undimmed.

“To share my music experiences with my listeners is the most exciting thing,” he said. “Also, being a radio personality gives me a lot of chances to talk to musicians and all music-related people. Through music radio festivals, I can make friends with many of my counterparts in other countries. To me, music is the universal language to connect myself with the world.”

Looking ahead, Zhang expects pop music to continue to guide his life. “My future plan is to publish a book which highlights many of my exciting experiences with musicians and stars from other countries,” he said. Zhang also plans to open his own “music café,” “where all music lovers can enjoy my CD collections and photo gallery.”

Original article by James Careless on the RadioWorld website published in July 2019.

This material remains © Future plc and is for your personal use only.

All photos courtesy of SMG Radio.

Read more about early radio in Shanghai in our features: Chinese Local Radio in the 1930s and Shanghai Radio Dial 1941 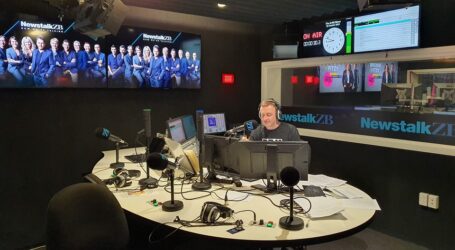