Long before cell towers started sprouting up everywhere, the federal government commissioned telecommunication companies to build five massive fields of shortwave radio antennae. The structures, which reached up to 450 feet, were located in out-of-the-way places in California, Ohio and North Carolina. Each was designed to bounce radio waves off the ionosphere, allowing federally produced programming to be transmitted all over the globe.

The U.S.’ international radio broadcaster Voice of America was born during World War II. It expanded during the Cold War. As technology advanced, its programs were carried via television and digital platforms. Today it is part of the U.S. Agency for Global Media, providing news and information in 50 languages to a weekly audience of 275 million.

Its early years are traced in a fascinating exhibition at the Center for Land Use Interpretation in Culver City. “Voice of America: The Long Reach of Shortwave” takes visitors back to the predigital world, before our political leaders began tweeting their innermost sentiments and policy decisions. Back then, international audiences were addressed more formally, via carefully scripted programming.

Rather than focusing on content — and the charged, often contentious relationship between information and propaganda — the exhibition examines the infrastructure of shortwave radio transmissions. Of course, that structure comes with assumptions about the role of government — and a free press — in a democracy. As is the case with exhibitions at CLUI, visitors are not told what to think, feel or believe about such important subjects; we are free to come to our own conclusions.

The antennae are the stars of the show. They appear in photographs, in videos and on touch-screen monitors. Arranged in grids, arcs and asymmetrical arrays, they resemble high-tech fishing nets, impossibly spindly bridges, supersized spirit catchers and otherworldly telephone poles. Sculpturally impressive, they make Land Art look fussy, precious and small.

All but one of the five transmission stations have been abandoned. The most haunting component of the exhibition is a three-minute video documenting the destruction of the antennae. In sequence after sequence, little puffs of smoke appear before the towering antennae yield to the tug of gravity and topple to the earth in seemingly slow motion. Some crash into others, causing them to fall like skyscraper dominoes. It’s a sad ballet that marks the end of an era.

A pair of touch-screen slideshows is also bittersweet. It takes visitors on a virtual tour of Transmission Station B (the only one still functioning) and Transmission Station A (its twin). Both are near Greenville, N.C. To see the up-and-running station alongside its vandalized, disused doppelganger is to glimpse a living world next to a dying one.

On View
‘Voice of America: The Long Reach of Shortwave’
Where: The Center for Land Use Interpretation, 9331 Venice Blvd., L.A.
When: Fridays-Sundays
Info: clui.org

Material from the orginal article remains © Los Angeles Times and is for your personal use only. 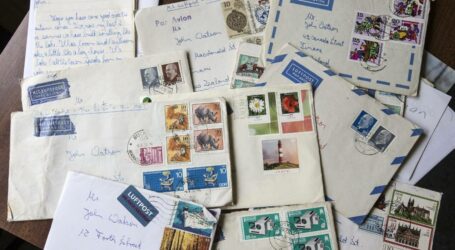 Some of the correspondence the pair have exchanged over the past 53 years. Photo: JOHN BISSET/STUFF
January 13, 2020
Comments: 0