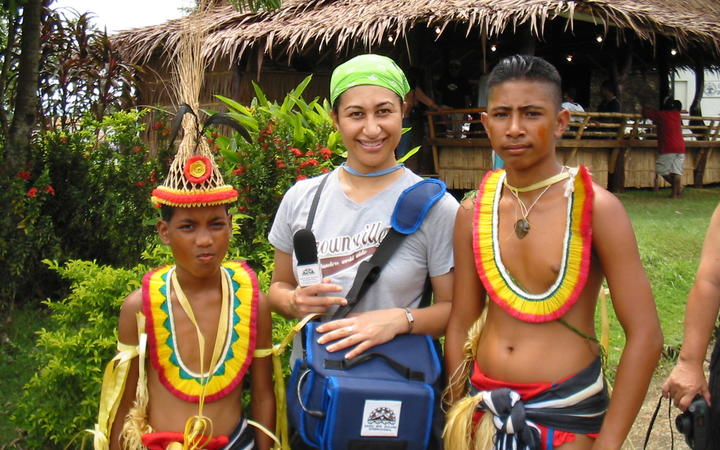 On 24 January 1990, Radio New Zealand International beamed into the Pacific, on a new 100 kilowatt transmitter.

New Zealand has had a short-wave service to the Pacific since 1948. The station broadcast on two 7.5kw transmitters from Titahi Bay, which had been left behind by the US military after the Second World War.

In the late 1980s, following growing political pressure to take a more active role in the Pacific area, the New Zealand government upgraded the service.

A new 100kw transmitter was installed and, on the same day the Commonwealth Games opened in Auckland, the service was re-launched as Radio New Zealand International.

“What we were able to understand was how important radio was and still is in the Pacific, where as here radio had become a second cousin to television… different thing in most of the countries we worked with,” said RNZ International’s first manager was Ian Johnstone, from 1990 to ’93.

Mr Johnstone said news of a dedicated Pacific service into the region was welcomed by Pacific communities.

He also said it was important for New Zealanders to remember that New Zealand is part of the Pacific.

“One of the nice things is we say we are part of the Pacific, we are the southern corner of Polynesia, and let’s remember that.”

Linden Clark was manager from 1994 to 2016. She said the strength of the service had been its connection with Pacific people in New Zealand and the region.

“The history of of RNZI – RNZ Pacific – is absolutely marked by fantastic contributions from a whole range of people – not only employed people – but those who have given their time in all sorts of ways – both of the Pacific region and the Pacific communities here in New Zealand.

“That is the history of the station and I think that’s partly why it means so much to everybody who has had something to do with it.”

She said RNZ Pacific had built strong relationships over the years.

“We have always been about trying to support and partner with those Pacific media, radio stations, individuals and journalists, rather than broadcast and talk to them.

“We want to talk with them and use their expertise and develop that and that’s been really satisfying.”

Adrian Sainsbury, who’s RNZ Pacific’s frequency manager, said in the early days, it was difficult to get Pacific stations to take bulletins as the Australian Broadcasting Corporation’s Radio Australia was the dominant broadcaster in the Pacific.

“And we built up, over time an extensive network. And as I say, from a handful, of possibly two or three, we are now right up to 20 now, across the Pacific, stretching right up to Micronesia,” he said.

Sainsbury said RNZ Pacific was now the only dedicated Pacific broadcast service on short-wave across the region.

The signal can sometimes be heard as far away as Japan, North America, the Middle East and Europe.

Changing media landscape in the region

“In many ways, the development seen in the Pacific this century has been much faster than elsewhere – television has made a late entry to be quickly followed by an explosion of social media – just like everywhere else,” according to Walter Zweifel, former News Editor for over 20 years.

He said the internet has built information bridges in the region that were simply not there two decades ago. Gone are the days of the fax but distances are still a challenge.

Given the geography and the cost of running a media outlet, he said radio had remained resilient and vital.

“Small countries, for example in Micronesia, are still struggling to develop their local media and technological change has brought little benefit,” he said.

“In more populous countries, multi-media output has flourished. Like elsewhere, the printed press has faced steep challenges. Fiji lost one of its daily papers as did French Polynesia, which now only has one daily left.”

And challenges remain for journalists in the region.

“There has been a professionalisation in my view. There seem to be more and better trained journalists in the field and at the same time more gatekeepers and communicators around decision-makers.”

“Depending on the country, access is now more difficult while there is more information in terms of releases and statements. Also depending on the country, journalism can be frustrated. While places like the US-affiliated territories and countries accept free media, others have clamped down on liberties known earlier. Fiji is an example of the latter,” he said.

“Pressure on individual journalists has continued, with cases of overt and covert threats popping up in many places.

“Variations throughout the region are however huge. Restrictions are still widely in place for outsiders wanting to report from Indonesia’s Papua region, and Nauru nowadays all but bans foreign reporters. In the French Pacific, there has been an improvement as the media lost some of the timidity of the Lafleur and Flosse era.”

Thirty years later the service has developed and established itself as the region’s most comprehensive and reliable source of regional news and is relayed daily by over twenty Pacific radio stations.

It broadcasts on a range of platforms including analogue and digital short-wave, satellite, and online and has an estimated audience of 1.8 million people in the Pacific.

Koro Vaka’uta has been RNZ Pacific’s News Editor for the past year.

He said it was awe-inspiring looking back at what had been achieved over the past 30 years and in some way it just added to the responsibility of what the current team was doing.

“With so much of the media landscape changing there is also an onus on RNZ Pacific to be dynamic and progressive in its approach now and in the coming years, while maintaining its core news role with integrity,” he said.

“While that’s probably one of the biggest challenges, there is also an increasing awareness of the importance of telling Pacific stories through culturally appropriate lenses and we will seek to do that through our growing Pasifika staff numbers and through being a vehicle for people on the ground or whenua itself to have a voice.”

© RNZ News 27 January 2020
This material remains © Radio New Zealand and is only to be used for non-commercial personal or research use. Any other use requires permission of the copyright holder.

This is a report from RNZ Pacific at 0716 UTC on 11725 kHz
as recorded and contributed by Mick Delmage in Sherwood Park, Alberta.