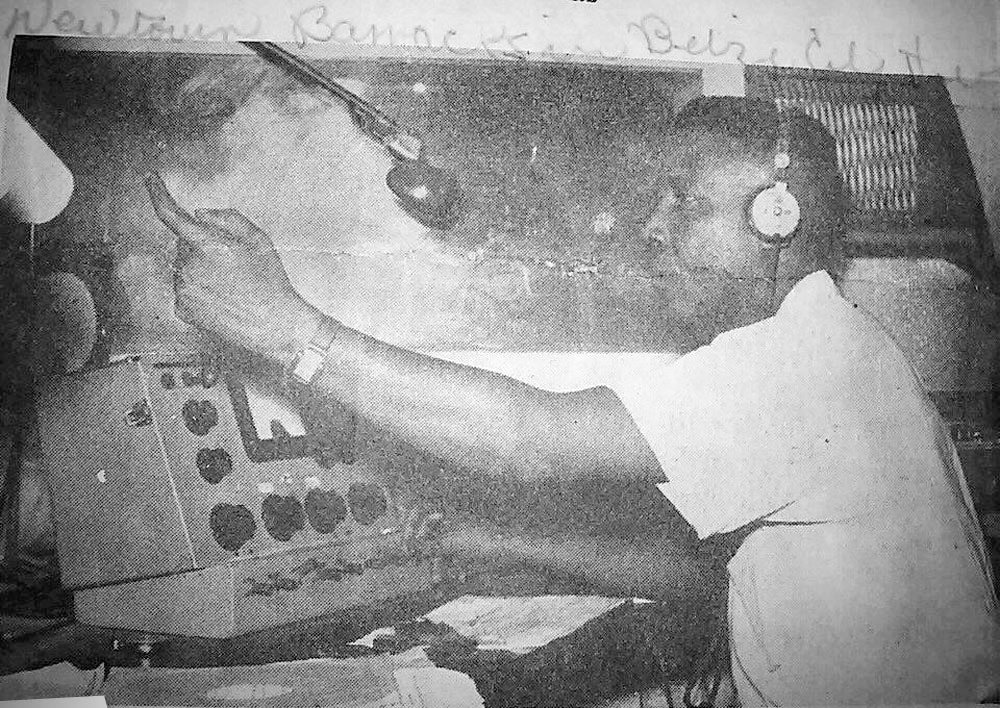 Radio announcer and comedian George McKesey broadcasting from his studios in the 1950's. It was located behind Paslow Building.

The Ghost of George McKesey Still Haunts Us All!

Pinned down in a green and mahogany sofa set near the radio my father made from his own hands in our small but neatly arranged living room, the captivating voice of the Belizean storyteller, George McKesey, that Belizeans of the 1960s and 70s had come to know as the true theater of the mind, explodes in the best Kriol lingo.

My being was so entertained by the Belizean folklore stories he told. McKesey takes the Belizean cultural mind deep down into the core of his imagination, pulling out traditional Belizean narratives passed down from one generation to the next with excellent comic relief that my mother would say makes you laugh “til yo wahn split yo side!”. He was exceptionally talented as a Belizean historian, entertainer, and broadcaster who displayed oral excellence in technique and delivery although he never even went beyond the primary school grade.

For me as just a boy then, George McKesey was the epitome of Belizean radio that was in its infancy in terms of broadcasting. Those like him and other pioneers that came from out of the colonial British Kriol establishment and wrote and spoke in the Queen’s English with excellence and eloquence, built Radio Belize (formerly the British Honduras Broadcasting Service – BHBS) from the ground up into one of the best broadcasting networks in the Caribbean.

Radio Belize was everything, from entertainment, to local and foreign news from BBC, American radio soap operas like “Doctor Paul”, “Chee Chi”, and others, as well as Belizean Kriol folklore.

It was in the folklore that McKesey created a kind of genre of Belizean theater that came out of Radio Belize in the 1960s and then on to the stage at the Bliss Institute in the 1970s. Written, produced and directed in typical Belizean Kriol, this master of Belizean linguistics had amalgamated the Kriol lingua franca into the fabric of Belizean life that can be noted today as authentically “Belizean”. His broadcasting techniques using the spoken word of the Belizean people institutionalized Kriol as a language rather than a dialect.

He was one of the first, along with the legendary “Johnny Kwaku” (who was George Gabb), to tell stories on the radio using Kriol. And when he told them, it was like an imaginary television screen was beaming at you in the room though Belize did not have television in those days. You just could see it and could not stop listening for every word was so well pronounced as to make you see the action.

McKesey incorporated the anthropology of Belizean Kriol vocabulary, proverbs, norms, sayings, music and dance using soundtracks of speech to dramatize the plot, raising action and climax of his stories. The most famous of them were “John Di Chiney Man”, “Midnight at Di Graveyard”, “Siman an Det”, and “Bra Hanancy an di Craab.”

To prove his point that Kriol is a language and not a dialect, McKesey wrote and produced a book in 1974 called, “The Belizean Lingo”, that compiled Belizean Kriol proverbs, vocabulary words, and sayings, in perhaps one of the first Kriol dictionaries. It also included a radio diary of his broadcasting memoirs and dialogue of his shows that he broadcast on Radio Belize during his career as a civil servant there. It’s a rich collection of the Belizean culture all intertwined within one of the most scholarly presentations that appears to have gone over the heads of Belizean academics. Whether McKesey’s work has been ignored for the mere fact that the black petty bourgeois of Belizean society had seen Kriol as “corruptions” to the English language, the visibility of “The Belizean Lingo” appears to have vanished from Belizean high schools, bookshelves and libraries where English has been taught as a primary language.

Perhaps the jury is still out on whether it is better to teach Belizean children nationwide in the African-originated so-called “Broken English” rather than the European-originated English language. Studies in education have continued to show internationally that African and Indigenous children learn better in the language of their culture that is not necessarily English. Although there is a colonial mindset that still affects Belize after one of its most noteworthy linguists had passed on, most of the results of what is coming out of Belize today in relation to Belizean education within the underserved communities nationwide have not been all that good.

And some of the reasons may be pointing to just what George McKesey may have been pointing out in his research that Belizean Kriol has “grown out of English and other languages”. Because some Belizean children are still writing and speaking Kriol in English, Belize may need to improvise its educational curriculum using English as a second language to Kriol so as to produce better results.

The school of Belizean lingo that the legendary Belizean linguist George McKesey innovated, continues to influence Belizean culture directly and indirectly through the language of broadcasting we hear on Belizean media now, especially the grassroots KREMANDALA in Belize City. The old Belize capital has become the Mecca of the Belizean Kriol communities. Nowhere else do we hear more Belizean Kriol spoken in broadcasting in Belize today than on KREM radio and television. Perhaps that is what it means in Kriole to be “Belizean tu di bone”. The ghost of George McKesey still haunts us all.

This material remains © the original owners and is only to be used for non-commercial personal or research use. Any other use requires permission of the copyright holder.

Great to read your item on Radio Belize.

I met George at the station in 1962 while hitch-hiking through Central America, including British Honduras as it was then called in 1962. 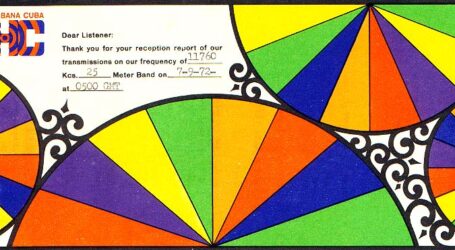 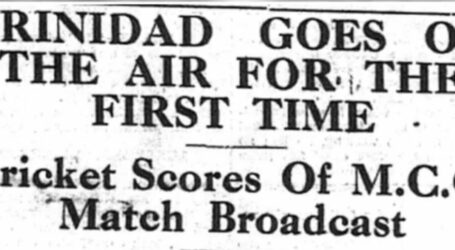 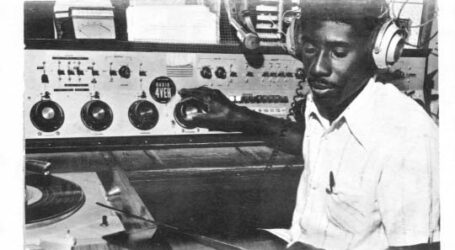