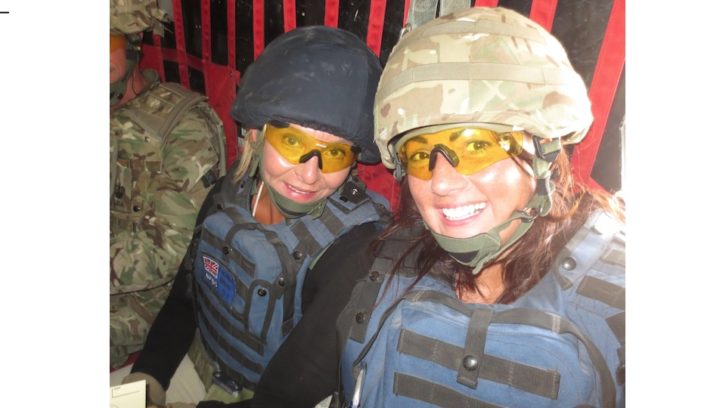 For 75 years, the broadcaster has been providing U.K. troops worldwide with news, sports, and content from home

SUFFIELD, Alberta — Drive to Suffield —just east of where the Canadian Rocky Mountains rise up — tune the car radio to CKBF on 104.1 FM, and you can enjoy the latest in contemporary British pop radio (music and witty talk) with a military twist.

This is because you’re tuned into BFBS [British Forces Broadcasting Service] Canada; one of the radio stations operated by Britain’s Forces Network to serve U.K. troops anywhere in the world. In this case, the troops are posted at Canadian Forces Base Suffield; the largest military base in Canada and home to United Kingdom troops training in live-fire exercises.

“We are the forces’ radio, TV and online broadcaster for U.K. troops,” said Nicky Ness, director of Forces Broadcasting & Entertainment. “We provide entertainment, information and connectivity for the British military community; not just in Britain, but wherever they happen to be in the world. We also champion the armed forces community to the world at large, because we believe that fundamentally supports their morale and welfare as well.”

The radio/online content produced by the Forces Network is a mix of live local content produced at its terrestrial stations, plus network programming drawn from the BBC and commercial U.K. stations. It can be heard in the U.K. on AM/FM and DAB+; on FM in locations such as Brunei, Canada, Cyprus, the Falkland Islands, Germany, Gibraltar, and Northern Ireland; on satellite in the U.K.; via the BFBS Radio app; and online anywhere through www.forces.net.

The Forces Network’s content is designed to entertain the troops and help them stay connected to home; to inform them on military-centric issues through an independent news service, and to provide the troops with access to services locally through each station. In listening to BFBS Canada, U.K. troops posted at CFB Suffield have access to a community broadcaster who speaks their language, in an accent that they recognize as being from home.

“We offer three services,” said Ness. “Our main service, Forces Radio BFBS, provides popular music and news produced locally; with additional programming sent over the internet via file transfer protocol by landline or satellite. We also offer BFBS Radio 2 for music, sport and spoken word content drawn from the BBC and commercial U.K. radio stations. Finally, Gurkha Radio offers Nepali language programs to our Gurkha troops, who remain an important part of the UK Armed Forces.” The Forces Network website (www.forces.net) hosts these channels, plus a wide range of content that is available on demand.

Today’s Forces Radio BFBS is as polished as anything you can hear on mainstream U.K. radio. (In fact, BFBS Canada is easily as professionally produced as the commercial Canadian stations serving nearby Medicine Hat; maybe more so.)

However, the service wasn’t so slick when it began testing as an experimental service in recently liberated Algeria in 1943. Spearheaded by some “switched-on colonels” who understood how central radio had become to British culture, said Ness, “British Forces Experimental Algiers” signed on Jan. 1, 1944 broadcasting Vera Lynn’s iconic “Lili Marlene” on a salvaged German AM transmitter.

“The whole thing was what we would call a ‘Heath Robinson contraption’ [Robinson being a cartoonist who drew absurdly whimsical made of odds-and-ends that somehow functioned] put together of paper clips, strands of wire, and string that saw the transmitter housed in the pigeon loft, and the ground wire connected to a drain pipe,” Ness said. “The loft was the highest point in the area, and connected to its makeshift antenna, gave our troops a real-time link to home when they needed it most.”

After the Nazis were defeated, the U.K. established British Forces Network Hamburg; a source of British content for Allied occupation troops. As the world situation changed and British Forces were deployed to conflict zones such as Cyprus, Nairobi, Aden (Yemen), Singapore, Brunei, and the Falkland Islands, BFBS followed with radio stations that were either deployed on site using mobile equipment, or in local facilities either existing or purpose-built. In the same vein, as hot spots cooled, BFBS pulled out; such as happened in 1994 when BFBS Berlin closed down following German reunification and withdrawal of U.K. soldiers.

During this time, BFBS engineers improvised as necessary. This includes employing cactus needles to play 78 rpm records when steel needles ran out in Benghazi, and rebuilding their station in 1951 after a herd of elephants trampled the first one into the dust. Interesting fact, apparently cactus needles can only be used for one play each before wearing out.

In doing so, Forces Radio BFBS has stayed current with advances in broadcasting technology. This is why the service is now on DAB+ throughout the U.K., and is pioneering audio services that can be accessed by smart speakers such as Amazon Alexa and Google Home.

“We want to be wherever our listeners are,” said Ness. “When 5G comes online and streaming audio to cars becomes more practical, we’ll be there too.” At present, Ness estimates Forces Radio BFBS’ global listenership “to be in the millions”; comprised of the British military, their families, and wider communities — nationally and internationally — with an interest in the forces.

Although Forces Radio BFBS’ distribution has changed profoundly since its initial pigeon loft station in 1943, the service’s mission has not: To serve the British Armed Forces with the most entertaining, informative, and morale-building content possible, no matter where their audience is; 365 days a year.

“All of us are here to do our very best for our listeners, and based on the surveys we regularly conduct, our troops are very satisfied with what they hear on Forces Radio BFBS,” said Ness. “At the end of the day, there can be no better heartfelt thought for a broadcaster than that we are serving an audience who enjoy and value what we do.”

James Careless reports on the industry for Radio World from Ottawa, Ontario.