The growing Northwest Queensland mining town of Mount Isa had by 1958 a population approaching 15,000 but radio reception was virtually non existent. The nearest stations in the medium frequency band were 4QL and 4LG at Longreach, 350 miles away. Few people were aware of, or listened to the Brisbane short wave stations VLQ9 and VLM4.

The commercial radio station 4LM was inaugurated on the 15th of May 1961. Their preferred callsign, 4MI, was already given to the A.B.C., whose Mount Isa station opened in July, 1960.

The station transmitted on 1370 kHz with an authorised power of 500 Watts.

4LM’s mast height was listed as 180 feet in a 1972 Visual Flight Guide, and used nine miles of copper wire buried around the tower as a ground plane.

The first broadcast was an official dinner from the Hilton Hall using 200 watts. The station was on air 0630-1400, and 1800-2200 daily. Commercial production was conducted in the studio while off air each afternoon.

On February 6th, 1965, their manager, Ian Elstob, was attacked by three intruders.

The station moved to new studios and offices in 1973.

4LM was a member station of the Colour Radio Network in the 1970s along with stations 4IP Ipswich and 4LG Longreach.

After the Austalian medium-wave band was reorganised to use 9 kHz spacing 4LM moved to 1368 kHz.

Thanks to Bruce Carty, Donald Bainbridge and Al Kirton (4KZ) for material for this article. 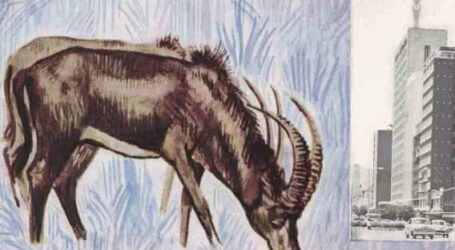