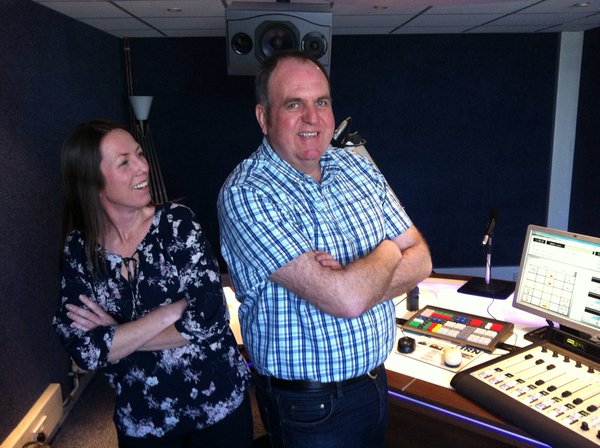 From the Channel Island of Guernsey, the thoughts of Island FM radio presenter, journalist and Douzenier (councillor) Richard Harding.

In 2015 the Bailiwick’s newest radio station took to the air although you may not know it unless you live in Alderney. On the 12th February, following a series of short-term trial licences, Quay FM became the Channel Islands first Ofcom-licenced community station broadcasting on 107.1MHz. It was founded by broadcasting veteran and island resident Colin Mason. Licences were advertised for the whole Bailiwick and although there were rumours several groups had shown an interest only Quay FM applied by the closing date in March last year.

The story of radio in the Bailiwick goes back much further. Two of the ‘swinging sixties’ offshore pirate radio station ships were fitted out at the Marine & General boatyard in St. Sampson’s. Radio 270’s ship, a converted Dutch lugger called the Oceaan 7, then sailed to an anchorage in Bridlington Bay to broadcast to the north east of England and Radio Scotland 242’s MV Comet headed even further north… Remembering the principle of Radio Caroline and the other offshore pirate stations as well as the so-called ‘périphériques’ beaming in their signals from outside France into the country – RTL from Luxembourg, Europe 1 from Germany , RMC from Monaco and Sud Radio from Andorra, the founder of France’s biggest commercial radio network NRJ (pronounced energy) Jean-Paul Baudecroux held brief talks with Sark’s Seigneur Michael Beaumont in the early eighties with the idea of building a huge transmitting station on the island to serve France. Perhaps not unsurprisingly the idea was quickly rejected…

The first Guernsey-based station to hit the local airwaves wasn’t Island FM or even BBC Radio Guernsey but hospital station Jubilee Radio based at the Princess Elizabeth Hospital. Named after the Queen’s Silver Jubilee in 1977, they began programming within the hospital the following year although there have been a few interruptions over the years. The station can now be heard on the internet or on smartphones using the TuneIn app. Jubilee have recently refurbished their studios which have been moved to a new home above the canteen.

Broadcast radio arrived in the Bailiwick when BBC Radio Guernsey took to the air on AM only (or Medium Wave as it was then known) on 269 metres or 1116kHz from Commerce House on the sea front on the 16th March 1982 the day after BBC Radio Jersey. The first manager was Tony Talmage and current Assistant Editor Kay Langlois is the only remaining member of the original team. Originally the station broadcast for just a few hours a day and their first major challenge was covering the 1982 States election. Stereo FM transmissions began on 93.2MHz in 1985 with and Alderney relay on 99MHz added a few years ago. Earlier this century the station moved to state-of-the-art new studios along the road at Bulwer Avenue and has greatly expanded its broadcasting hours compared to the early days. The station sometimes splits its frequencies to offer live coverage of States meetings on 1116kHz AM alongside regular programming on its FM frequencies.

In August 1988, the Channel Islands got their first real taste of local commercial radio, albeit semi-pirate when Contact 94 started broadcasting programmes in English from Lessay in Normandy. The operators led by Jersey hotelier Stephen Clipp bought a small legal French station turned up the power and beamed their signal towards the islands. The station changed frequencies several times and the signal was strongest in Jersey where they had a sales office. Following the announcement that legal commercial radio was going to come to the Channel Islands, and judicial moves to close the station for interfering with the signals of other radio stations, Contact 94 decided to close down in 1991 so that it was in a position to bid for the Jersey licence. In the end they didn’t bid and the licence was won by Channel 103FM. According to Tony Esnouf around this time there was also some English language programming being produced by Radio Force 7 and broadcast from transmitters in St Malo and Granville although the signal was far weaker than that from Contact 94. An internet-only Contact 94 tribute station ran for a few years recently until it became Bailiwick Radio with a number of different streamed services.

The Channel Islands could have had local commercial radio many years earlier. Manx Radio in the Isle of Man began in 1964. The idea for local radio here had been studied by the President of the Guernsey Post Office Board Conseiller Peppino Santangelo and the States of Guernsey gave in-principle approval to a pan-island station for Guernsey and Jersey in 1970 but it foundered when the States of Jersey referred it back to the Broadcasting Committee.

There have been several temporary stations over the years known as RSL’s (Restricted Service Licences) broadcasting for a up to a month at a time such as Offshore Radio set up to cover the World Powerboat week in 1988, Island Sport 105.3 run by Island FM and also relayed in Jersey on 101.3MHz for the 2003 Nat West Island Games, the trial broadcasts of Quay FM in Alderney twice a year and even Old School FM broadcasting briefly from Elizabeth College. There have also been a few internet radio stations most recently one operated by Fusion Night Club.

Guernsey’s licence was won by Island FM and the station was opened on the 15th October 1992 by Broadcasting Committee President, the late Valerie Renouf. It beat Jersey’s Channel 103FM in the race to begin scheduled programming by 10 days. The station took to the air on 104.7MHz FM from Southside in St Sampson’s when current Commerce & Employment Minister Kevin Stewart, formerly a presenter on both BBC Radio Guernsey and Contact 94, made the opening announcement and played the first song, Madonna’s La Isla Bonita (Spanish for the beautiful island). The station later added a relay station to improve reception in Alderney on 93.7MHz. Island FM set up the very successful local charity Help a Guernsey Child and has run many fundraising events including Big Kids Days. In 1998 Island FM was sold to local newspaper baron Sir Ray Tindle and Tindle Radio was born. The group took over the The Beach in Great Yarmouth and expanded at one point to own around 13 radio stations including Jersey’s Channel 103FM. In 2013 Tindle sold its loss-making stations in East Anglia but retained the two Channel Island stations along with Midlands 103 in Ireland. Island FM still has its original Chairman, John Burley, and one original team member, Carl Ward, who started as a freelancer before landing a full-time show in 1996. In terms of market share, reach and listening hours per head Island FM continues to have the highest audience figures for any radio station in the whole of Britain (RAJAR Q1 2017).

Despite competition from TV, services like Spotify, X Box, downloads and more I’m still optimistic that radio has a bright future. Here we could eventually have more community radio stations and possibly a DAB (Digital Audio Broadcasting) multiplex with some locally-produced channels although whether they would be commercially viable in such a small market is another question. In 1979 the Buggles claimed video killed the radio star. I say, not yet!

Original article published on Richard Harding’s Blog, June 15, 2017, and is only to be used for non-commercial personal or research use. Any other use requires permission of the author.