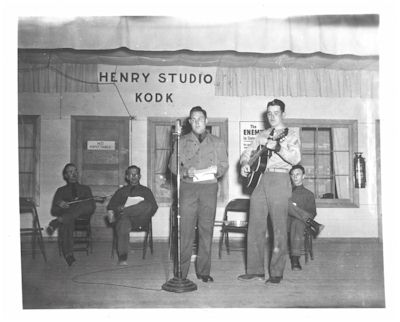 Kodiak is credited with being the first armed forces radio station. This is correct if you qualify it by saying that it was the first to go on the air and STAY on the air. There were also significant pioneering efforts in Sitka, Alaska, in Panama, Hawaii, and the Philipines. Noteworty also was KGEI in San Francisco Bay which was instrumental in direct short-wave broadcasts to the Philipines where Americans re-broadcast the signal locally.

In October 1941 Captain William H. Adams, a former radio man from San Francisco, also the Army base finance officer, Sgt. Bill Merritt, Sgt. Rule Bright, and about a dozen other men from Ft. Greely organized a radio station for Kodiak.

The first quarter-hour variety show aired live over wired loudspeakers on October 28 1941 from the lounge of the officer’s quarters. Everybody immediately showed enthusiasm for local Kodiak radio. The contractors and their general superintendent, J.C. Henry, held loteries and raised money for a fifteen-watt transmitter and other equipment to be purchased in Seattle. The equipment arrived in early December. The guys assembled the stuff in the base ordnance building and made some test broadcasts for a few hours each day. The signals were heard in the town of Kodiak.

It was apparent that facilities would be needed. Henry came through with an empty piece of land near Lake Louise where studios were constructed. Volunteers completed a broadcast station building before the end of December 1941. It consisted of a control room, a studio for small performing groups and individual performers, offices, and a 100-seat auditorium.

This building (A-130) was probably in the athletic field behind the present-day Nemetz Convenience store. This 2035 square foot building was on the list of structures approved for disposal dated 27 Jan 1960 revised to 1/13/65.

The staff named it KODK and began full-time broadcasts on January 10, 1942. They were on the air from 7 am to 10 pm daily and could be heard everywhere around Kodiak on 1300 Kc/s.

The early programs consisted of recorded music and newscasts with a volunteer staff. General Charles Corlett addressed the troops over KODK complimenting the harmony of the civilians, the Army, and the Navy working together.

In March 1942, Joe E. Brown appeared live on the station during his 33-day tour of Alaska. He said it was the only station on the air he found on his travels. After he got back to Hollywood, Brown had his friends in the entertainment business send transcriptions of their radio broadcasts to KODK.

In November 1942, KODK moved to temporary quarters in the old post library building while it’s building underwent improvements. On December 5, 1942, they returned to a renovated building and an official FCC license.

The Kodiak radio station was certainly among the first. What it probably accomplished was demonstrating to the command that such an effort was indeed valuable. Other soldiers also started with phono oscillators, like Sitka, and a number of independent efforts sprang up throughout the world. Some of the soldiers wrote to syndicators of radio programs asking for material. A syndicator called the War Department to get permission. Heck, the War Department had never heard of the station. Some Pentagon brass showed up in Kodiak and Sitka to find out just what was going on. One of the brass was Tom Lewis. He was to preside over the birth of AFRN.

During the life of the station in Kodiak, it was located in several places. During the time they were transmitting television, the studio was in building S-25 (containing 4,808 square feet) on Nyman Penninsula in what is now the fuel farm. The TV was on the first floor and the radio was on the second floor of a converted barracks. This building is shown on the WWII era maps as building B-63-5. Mike Murray who works at KMXT remembers this station on Nyman Penninsula. Tony Perez of Kodiak reported that it had been in Bells Flats building 444 at one time. It was in building T-1 (commsta) at the end.

During the life of the radio station, it operated with 15 watts in 1942, with 250 watts just prior to 1977, and after 1977 at 50 watts. The only thing known about the TV was it was on channel 8. The first radio frequency was 1300 KC/s. In the FAA Alaska Supplement 1986 it was listed on 960 KHz with 50 watts carrying programming from studios at Elmendorf. It was one of 20 Alaskan Forces Radio Network stations on the air in 1986. It started under the Army, was maintained by the Navy, and ultimately the Coast Guard was responsible with programming by the Air Force.

The Ft. Greely station was converted into an unattended translator in 2001. The last manager was SGT Tom Clementson.

KODK, the lusty-lunged, and vigorous “voice of Fort Greely,” which has operated without benefit of FCC benediction for lo, these many months, has been given an honest name.

The little Army station, first of its kind in the world, has been blasting the ether with all the power of its 15 watts with jive, symphony, dogface comedy, stolen news and pilfered programs for so long that its listeners have come to take it for granted, but it was not until this week that the hardy youngster became officially recognized.

Tentative approval of the Federal Communications Commission, which came through via the War Department, involves a change in KODK’s call letters, since the name was already allotted to a commercial station which had been projected for downtown Kodiak—but that is a small matter to a station which has the highest Crosley rating in America.

When KODK was started at Fort Greely with equipment donated by contractors men at the base, it was not realized that the call letters had been requested for a downtown station. Construction of the commercial station is being postponed due to priorities, but it will be welcomed as an added entertainment feature when and if it is started.

Meantime, the FCC in approving KODK, has allotted the call letters WVCQ to the soldier outfit. The transition from KODK to WVCQ will be made gradually in order not to confuse the listeners, who at this distance can get only one station on their sets and would probably die of shock if they thought they’d picked up a new one.

For the benefit of those who came in late, KODK is a 15-watt, non-commercial, all-soldier radio station operated on 1400 kilocycles, 16-1/2 hours a day, by Corp. Bill Merritt and a staff of soldier experts.

It broadcasts local programs from its miniature “radio city” studio, as well as big commercial programs intercepted on a 15-tube set and fed into KODK’s transmitter. Shortwave broadcasts from the States, which are normally picked up by but a handful of powerful [sic] sets on the island, are relayed through KODK so that every man with a $5 peanut set can pick it up as well as if he had a powerful [sic] Halicrafter [sic].

Bing Crosby, Bob Hope, Fred Allen, Jack Benny–none is too big for KODK to pirate off the air and make its own. KODK sells no advertising, but does not object to relaying the toothpaste commercials right along with the highjacked music and comedy. Many fine transcriptions are now being sent for local broadcasts from generous commercial studios and networks in the States.

Joe Stevens manages the Kodiak Military History Museum, and is Chief Engineer of KMXT 100.1 FM and KMXT Channel 9 both of Kodiak, AK.

An amateur radio operator for many years, Joe also maintains an exhaustive website www.kadiak.org about the Kodiak area, with extensive links about communications in the region. 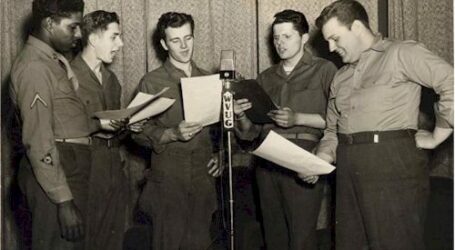 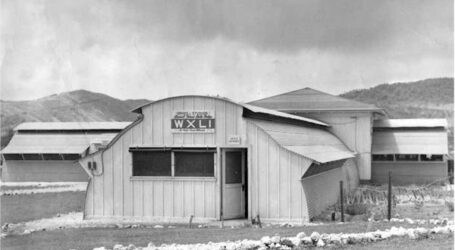