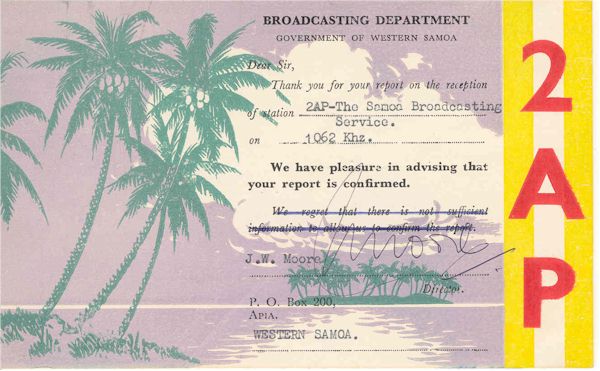 It was very early in the wireless era that a spark gap Morse Code station was established at Apia on the main island of Upolu. At the time, Western Samoa was a German colony and the transmitter was a newly designed Telefunken unit with the “singing spark” technology.

However, soon after the commencement of the European War in 1914, New Zealand troops landed in Samoa, captured the islands, and the radio station also. From then onwards, this maritime station in the Samoan Islands was on the air under the callsign VMG.

Wireless broadcasting came to Samoa, at least temporarily, way back in the pioneer eras. It happened this way.

A New Zealander, Mr. E. R. Plominski of 3ZC in Christchurch, was granted a radio broadcasting license for a station in Apia in 1931. It would seem that he sold this license soon afterwards to a newly formed company, the Apia Radio Corporation.

This new station was soon afterwards inaugurated with 5 watts on 940 kHz under the callsign ZL5ZA. However, station 5ZA was on the air for less than two years and it was closed on March 31, 1933.

For a period of more than 10 years, Western Samoa was without its own radio station, though it was possible during the hours of darkness to hear stations located on the Pacific rim. Soon after the end of the Pacific War, another New Zealander enters the picture. He was the noted Alan Roycroft who went on afterwards to radio fame in Hawaii as the engineering director for many of their mediumwave stations.

Alan Roycroft was stationed in Apia with ample free time to pursue a radio dream. He modified a 300 watt auxilliary aircraft beacon in Apia so that it could be switched from one operation to another. On the longwave channel 450 kHz it was on the air as an aircraft beacon with the continuous broadcast of the letters AP in Morse Code, and on mediumwave 630 kHz it was on the air as radio broadcasting station ZMAP.

Roycroft also set up an auxiliary studio in his hotel bedroom for his unofficial though highly appreciated radio station. He played music records, carried live broadcasts of band concerts on the hotel verandah, and read news bulletins into the microphone. However, this impromptu and short-lived radio broadcasting station highlighted the need for a regular station in Samoa, and the governor made such a request during his next visit to New Zealand. Thus was born the now very familiar radio station 2AP.

Apia in Western Samoa has been on the air shortwave during three different eras. When the mediumwave station was established in 1946 a shortwave transmitter fed the programming from the studio building by the seashore on the edge of Apia to the mountain top transmitter some 7 miles distant. This feeder transmitter was on the air on 7700 kHz under the callsign ZMB6.

This unique feeder service was heard back in 1946 by three well known DXers in the United States; Roger Legge, Mr Dilg, and August Balbi. Transmitter ZMB6 is shown as emitting 2 kW, but it is suggested that this was in reality probably just .2 kW.

A new QSL card was printed for the occasion, with the callsign 2AP in large red letters, and the text in black, on a white card. This transmitter was never in use for regular relays of broadcast programming. Two channels were allocated, 6040 kHz and 3241 kHz, though only 6040 was reported as heard overseas.

A third era of shortwave broadcasting from Samoa began to appear on the horizon when 2AP announced that plans were in hand for the installation of a shortwave transmitter during the year 1990. However, we have no reference anywhere in our files that this station was ever operative.

In 1994, the noted DX reporter, William Matthews, arranged a special relay of radio station 2AP in his DX Report from Radio Korea International. This relay took place on February 20, 1994 and it was heard worldwide in the shortwave relay stations carrying KBS programming. Special QSL cards were issued from Apia by station 2AP for this unique relay.

Mediumwave station 2AP has been on the air from 5 different locations, from the nearby mountain height Afiamatu, and with low power from three different regional locations. They are currently on the air with two units of 10 kW, with English on 540 kHz and Samoan on 747 kHz.

Station 2AP has issued several different QSL cards over the years, and if you happen to own one of these cards, it is indeed an exotic addition to your collection.

This article was originally prepared for broadcast over AWR in December 2001. 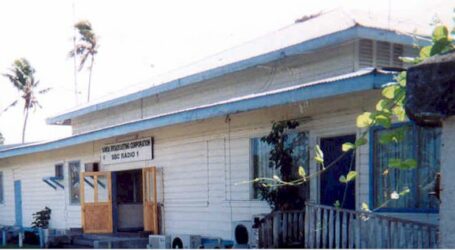 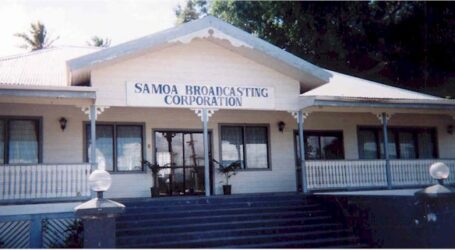