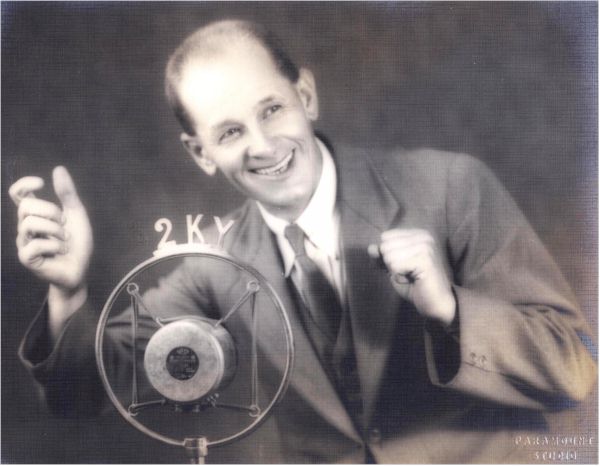 The beginning of broadcasting in Australia

He returned to Australia in January 1925 enthusiastic about radio and excited by the possibilities it offered.

A man of great vision, Voigt was the prime mover behind the Labor Council getting into broadcasting. He was clearly concerned that the same conservative powers who controlled the newspapers would try to dominate this new medium as well and attempt to control what information was broadcast over the airwaves. He was convinced that unions should have their own media voice via the radio, as well as the union newspapers, and approached the Labor Council with the idea of setting up its own radio station to give a voice to Labor politics in this country. This would allow a mass Australian audience access to information that countered the conservative political opinions pushed by the existing A-class stations and newspapers.

After Marconi discovered wireless in 1895 the Australian Government came under conflicting political pressures to make a clear-cut policy for the development of this high technology medium and to define their role in its management. Public communication up until that time had been by post, telegraph and telephone and the Commonwealth Postmaster-General wanted to retain its control when the new medium was introduced. This put them in conflict with AWA (Marconi and Telefunken), with patent disputes erupting between commercial wireless companies. During the coming war the Navy took control of all wireless activity but in 1922 the issue again surfaced as the birth of public broadcasting approached.

A broadcasting conference was held in Melbourne in May 1923 and regulations were drawn up, coming into effect on 1 August 1923. The Postmaster-General introduced the ill-conceived ‘sealed set’ system which required the purchaser of a new radio set to nominate which radio station they wished to listen to and to pay an annual fee which would allow them access to just this one frequency. However many enterprising people found that by tinkering with the sets they were able to overcome this problem and pick up more than the one station. By June 1924 only 1,400 listener licences had been issued and it was clear that the ‘sealed set’ system was impeding the development of broadcasting in this country and that a new licensing system had to be introduced.

In 1925 Voigt teamed with George Taylor to advocate a two-tiered system and campaigned for a Royal Commission into wireless. They fought for the introduction of B-class stations, privately owned commercial radio stations, which would fund their operation via paid advertisements and would cater for more popular demand. The A-class stations (Farmers 2FC and Radio Trade 2BL) drew their funding from listeners’ licence fees which were paid to the Government, but they also now wanted to carry advertising at low rates, and ‘sponsors’, which Voigt fought vehemently against.

While Prime Minister Bruce was in England, Voigt and Taylor campaigned in more than 60 country newspapers for a Royal Commission into radio. The Royal Commission was granted and they successfully put their case. New regulations were drawn up and the B-class stations were free to begin operation without the additional advertising competition from the A-class stations. This was a significant battle – if they had not won, the development of commercial radio in Australia could have been stifled.

The birth of 2KY

Voigt requested permission to address the Labor Council to advocate Labor getting on the air and at a meeting of the Executive Council on 17 February 1925 he talked about the benefits of owning their own station, the approximate cost of its installation and how a 1500 watt frequency would allow the station to broadcast to any part of Australia or New Zealand and explained that it could even be picked up on small crystal sets within a 12 mile radius.

At this meeting the resolution was passed recommending the principle of installing a B-class station and that a committee should be formed to look further into the matter. Voigt was appointed chairman of the Labor Council’s Wireless Committee and Jack Beasley and Jock Garden were made ex-officio members.

On 7 May 1925 the Labor Council applied for permission from the PMG to build a B-class broadcasting station in Sydney with a power of 1500 watts (which was to make it the most powerful station in the Southern Hemisphere at that time) and with programmes that focused on “matters of educational value, musical entertainment, news service, weather and market reports, public debates and other matters of general public interest”. The licence was approved on 20 May 1925 by the Chief Manager of the PMG Department, Mr. J. Malone.

Voigt then went to Western Electric to ask for a quote on building a small broadcasting station; they referred him to AWA who controlled the Patent Rights. AWA’s demands were over the top – they quoted 20,000 pounds to build the station plus 1,000 pounds per year in royalties. They stated that the station would not be permitted to advertise and would remain the property of AWA. Voigt was shocked by their greedy demands and decided to take on the AWA Patent Monopoly, telling them that he would go to their rival United Distributors, that the Trade Union Movement would fight them on the patent issue and that their patents would not be sustainable in law. He approached United Distributors and they agreed to build the station for 1,500 pounds, less than one tenth of AWA’s quote. However they were unwilling to build it in the name of the Labor Council as not being a corporate body it could not be sued for debt. So Voigt agreed to build the station in his own name and meet the bill himself. With his strong political beliefs and an unshakeable faith in this new medium, he mortgaged his home in Dee Why to pay for the building of the station.

At the beginning it was a financial struggle for the station so Voigt took little or no pay for the first couple of years, but he made sure that the staff was paid by going round each week to the Unions in Trades Hall and collecting small sums from each from their petty cash. In an effort to get the station up and running successfully there were still more fights to come over the next 10 years with the Valve Combine, with the Performing Rights Association, with the PMG and with some of the political factions, yet Voigt took them all on. Within only a few years the station was soon operating on a paying basis and had become one of the most popular radio stations in the country.

With Jock Garden’s help, Voigt got the Trades Hall Committee to provide space on the roof of their building for the aerial, the unused tower for the transmitter and a small room about 10 feet square as a studio. The design and construction of the station was undertaken by Ernest Gordon Beard, the chief engineer of United Distributors, and formerly a radio operator with the Royal Navy. He was assisted by Leonard Shultz, a young amateur radio transmitter. Garden suggested that Herbert Beaver, a variety performer and the son-in-law of a Union secretary, Gilbert Sinclair, should be the station’s first announcer. He started as the commentator for sporting broadcasts and soon became the station’s first studio manager. Mr. J. Brown was made the station’s first engineer.

The original studio was quite small and was equipped with an amplifier, a gramophone, an electric player piano and a carbon microphone – a Kellogg double button. Attempts at sound proofing were a little primitive, with the walls being covered in hessian in an effort to eliminate background noise and absorb echo. It was soon discovered it was not possible to use the toilet when the microphone was on as the noise of flushing would go to air!

The call sign allocated by the PMG underwent a number of changes before the station finally went to air – firstly it was allotted the call sign of 2IC on 20 May 1925, but as this turned out to be a typing error it was corrected to 2LC (Labor Council) on 12 June 1925, which was the call sign that had originally been nominated. But as the PMG authorities then felt 2LC could be confused with 2FC they changed the call sign again a few weeks later on 23 June 1925 to 2TH (Trades Hall). Voigt wasn’t happy with this and expressed a preference to call the station 2KY as he felt “it would carry better on air”, and this was finally agreed upon on 9 July 1925.