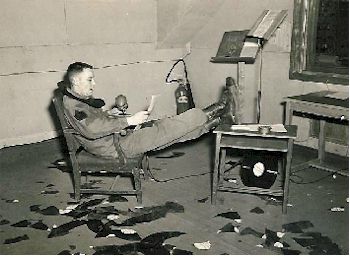 As Remembered by Dan Taylor

In October 1949, Sapporo AFRS began airing spots looking for announcers, no experience necessary. A friend, Lennie Nordgren asked if I wanted to go try out with him. At the time we were assigned to the 7th Signal Company, of the 7th Infantry Division, and I liked what I was doing. I wasn’t interested in the job, but I told him that I would go to keep him company. At the station, the program director asked me to read for him. To make a long story short, the PD called several weeks later and said if I could get approval for a transfer, I had the job. By this time, I was definitely interested, and through a small amount of deception and by stretching the truth somewhat, I managed to get approval to go to the station.

I joined the Sapporo AFRS announcing staff in November 1949 and of the many memories I have, there were two events that are the most vivid.

On June 25, 1950, I was working combo at the console when we were alerted that a very important news bulletin would be coming from FEN Headquarters in five minutes, and we should be prepared to air it immediately. It was the announcement that North Korean forces had invaded South Korea.

In the early 1950’s, Radiothons for charitable purposes were the rage in the States, so we decided to have one of our own for the “March of Dimes” Drive. Originally, the ‘March of Dimes’ was used to obtain public donations to help in the fight against Infantile Paralysis, better know as “polio”. It was the creation of President Franklin Delano Roosevelt, who became inflicted with disease when he was 39 years old. He reasoned that anyone, the poorest of the poor, the youngest and oldest, could afford to give a dime to find a cure for this cruel disorder. Although, the drive for dimes was ongoing throughout the year, the biggest push, including ours, coincided with FDR’s birthday in late January.

The plan for the Radiothon was to take pledges of one dollar and we would play the recording of their choice. Our hope was to stay on the air for 24 hours and collect at least $5000.00. Considering our audience, primarily young GI’s without much money, we felt that this was a lofty goal, and a dollar a song was the most we could ask.

For a week, we heavily advertised the Radiothon, and at 12:00 noon, on that Sunday we began what turned out to be a real adventure. Don Gibson, our chief announcer pledged that he (we) would stay on the air as long as the pledges kept coming in. Amazingly, when we reached our goal of 24 hours of airtime, we realized we had at least another 24 hours of requests waiting to be played. Much to his dismay, Don developed laryngitis after the first day and finally had to give the mike to someone else.

The most popular request was for “Take An Old Cold Tater And Wait” by Little Jimmy Dickens. It was only a matter of time until someone complained about the constant play and offered to pledge five dollars if we would break the damn record. Certainly, we took advantage of the offer, but somehow, somewhere, we always managed to find other copies, which of course, we promptly would break again with other pledges.

Possibly because we were sleep deprived, at one point we offered to break the record over the head of their favorite announcer with a pledge of at least 10 dollars. Those who are familiar with the flexibility of Long Playing Records (LP’s) know it would be impossible to break over someone’s head. We ended up using the arm of a chair and placed a mike close by for the full sound effect.

Eventually, it went beyond playing records, we had singers, guitar players, comics, and other entertainers, some good, some bad, who pledged just to get some air time. One bizarre request came late one evening, from someone at the NCO Club, if I remember, offering to pledge $50 if he could eat a razor blade on the air. We reminded him that this was radio, not TV, but he insisted and we figured, why not. He ate the blade and we immediately rushed him to the dispensary for treatment.

Somebody Answer That Phone…

All of us were involved, taking turn at the mike, taking pledges, pulling records, placing them in the order received, working the console, whatever was necessary to keep the pace flowing smoothly. We were either working or sleeping in cots at the station, with little time to eat. Early in the broadcast, we called out over the air, asking for donuts and coffee, or a sandwich or two. Seemingly within minutes, food began streaming in, brought in by individuals who had stopped at the snack bar at the PX, from company kitchen cooks, from the EM, NCO and Officer Clubs, and from the homes of our military families. This continued to the point when we had to plead for the food to stop; we shared with those who dropped by, but we still couldn’t eat all of it or even find a place to put it.

Finally, the Post Commander pulled the plug. He ordered us to stop taking pledges and finish with those we had. After 127 consecutive hours, almost five and a half days and nights, the party ended. We had gathered pledges that totaled $18,437.00. More astonishing, we actually collected $18,439.00, two dollars more than had been pledged. Not bad money from a bunch of lightly paid GI’s.

The news of our Radiothon reached beyond Camp Crawford and even Japan. Mrs. Eleanor Roosevelt, wife of FDR, wrote about and complimented our efforts in her column, ‘My Day’.

Sapporo AFRS was located in the Post Theater. As you can see from the floor plan, we had a good set up for a small station broadcasting with only 250 watts. On Sundays, when the weather was nice, we would open the window in the main studio and do our broadcasting lounging on the roof. For awhile, we also used the main studio for our payday poker games. However, we abruptly gave that up when the announcer on duty, working combo thought, unbeknown to the players, it would be comical to air the comments during the game. Those who were there shall remain nameless, but for a time we all thought there was going to be a complete change of personnel at the station.

The crew came from all parts of the United States, from different backgrounds, and with different goals, but we all worked and played together as a big family…most of the time anyway. Lt. Morton Granas was the commanding officer. Others names that I remember are Jerry Barton, Dick Burkett, Jake Grantham, Jack Gozo, Gene Gunter, James Holtzclaw, Jerry James, Jerry Litwin, Larry Newman, Willie Peace, and Jack Reidl. I apologize to anyone who I failed to mention.

We received great support from all of the military community at Camp Crawford. Many of the dependent wives and children volunteered whenever we had projects, and always with great enthusiasm.

Carrying great memories with me, I returned to the States in December 1951. Before I retired in 1969, I had many challenging and rewarding assignments, but as time goes by, I realize those years at Sapporo AFRS were two of the most enjoyable of my life.

Dan Taylor is now retired and lives in Athens, TX. 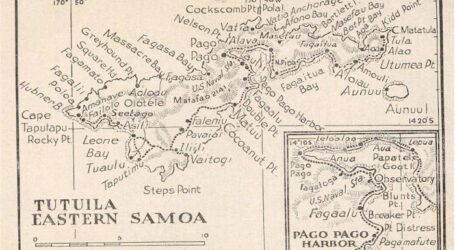