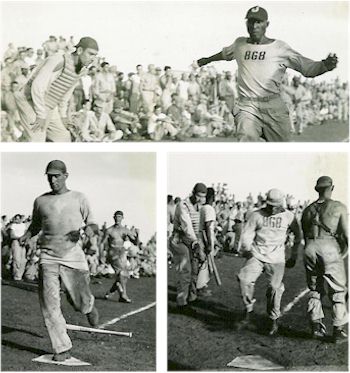 “One of the announcers was driving down the road the other day, and stopped to pick up some hitch-hikers. One of them was a flight sergeant on a transport plane. He saw the ‘WVTB’ on the front of the jeep and told quite a story.

It seems that his plane took off from the Solomons along with a full load of passengers. About 800 miles out they lost all radio contact for some reason and got lost. Finally they heard someone say ‘WVTB, the Pioneer Radio Voice of New Guinea’ and followed our beam in, landing with just a few gallons of fuel left.

He said that WVTB is his favorite radio station, which is understandable.”

Here’s the longer letter I promised you in a V-Mail a few nights ago. Have a little news this time, too. Will get to that later.

Well, Monday is Christmas, and we have big things planned for the holidays. The festivities will start Sunday evening when we throw a big “Studio Party”. We’ve invited anybody on the base who wants to come, and will probably have trouble packing them all in our Chic Sale size studio. WVTB has become quite an institution in the area – sort of a civic enterprise. We’ll have the studio all decorated up – Christmas tree and all – and refreshments. During the evening we’ll be playing specially recorded Christmas shows sent to us from the States with all the well-known stars, and in between will broadcast the goings on in the studio, with group Carol singing, and audience participation gags and routines. Should be a lot of fun.

Then, Christmas Day, they’re having the New Guinea Olympics a few miles away from the station, and we’ll be broadcasting the championship baseball game with yours truly on the mike. In the evening, a big variety show is scheduled at one of the theatres, and we’ll also have that on the air by remote control. I’m also working on a special show commemorating and reviewiing the events of the past year, a la “March of Time”. So for the next few days I’ll be fairly busy.

We’ve been doing a lot of work, fixing up the joint – studio and quarters. I’ve even got my little booth in the quarters fixed up with an electric light so I can read in bed – each man has his own bed lamp. One of the felllows has been painting murals on the studio walls. Another one of the guys even rigged up an electric bug trap. Of course, the first bug who flew into it shorted the circuit and blew out all the lights, but he’s still working on the idea. Didn’t even kill the bug either. The New Guinea varmints are rugged creatures…

Listen to this rare audio:

These letters have been made available, along with other material about John’s service with AFRS-2 and WVTB through the courtesy of Ruth Dietrich, his wife.