In the 1980s, a band called The Sports wanted to know who listened to the radio.

Well, cows do – at least at Alan Braid’s West Kentish dairy farm they do.

Mr Braid knows a thing or two about radios and the 400 or so in his workshop span more than a century of airwave technology. All are Australian, all are functional, and Mr Braid has not lost the passion to sniff out more

He is also a firm believer in the theory that music relaxes the savage beast – or the gentle dairy cow – and that cows produce more milk when relaxed. The radio in the dairy is tuned in to 7NT.

“You get the weather, the stockmarket and music for the cows,” he said.

“I am not sure if the cows take much notice of what is playing but all the old farms around here have radios in their dairies and we all get good milk.”

Mr Braid said he was disappointed the ABC had switched its local Tasmanian programmes to FM.

“The old radios just won’t pick that up. But I can still get 20-30 stations on the shortwave band,” he said.

Meanwhile, a BBC report has suggested farmers can get as much as half a litre more milk per cow by playing classical music or smoochy numbers in the cowshed.

Psychologists at the University of Leicester, UK, played music of different tempos to herds of friesian cattle.

Beethoven’s Pastoral Symphony and Simon & Garfunkel’s Bridge Over Troubled Water were a big hit in the milking shed. But when rowdy numbers, like Mud’s Tigerfeet and Size Of A Cow by Wonderstuff, were played, the increase in milk yield shut off. The music theory is not confined to the cow shed.

But back to the radios in Alan Braid’s shed.

Radios like the 1926 valve radio which still delivers clear sound and the wooden Weldon radio clock which is a far cry from the plastic digital number you find in modern motel rooms.

There are also impressive old music boxes – the Edison cylinder music box from 1915 and the wind-up Rexophone, which plays old 78 records.

“The cows would love this one,” Alan laughed as a swing hit from the Depression era came to life. His oldest piece is a 1898 cylinder record player with a tin trumpet.

Another 20 to 30 radios sit on benches ready to be brought back to life.

Included in this number is a radio out of Mr Braid’s 1955 Humber. He touches it with a tool and the radio springs to life.

“That’s what gets you going about these things. All of a sudden they will talk to you,” he said. Some radios were bought as shells of their former selves.

The wires were chewed and the frames were full of rat droppings.

Mr Braid picked up others clean and almost brand new from the back of cupboards and from antique fairs. Mr Braid said his passion for radios stemmed for his childhood.

“I have always played around with music. My grandmother had a nice old radio beside the window but she was having a bit of trouble with it. I got it going and from then on I was always called on to fix it.”

Mr Braid’s first radio was an AWA and the first one he bought simply for collecting’s sake was picked up at the second-hand shop in Sheffield.

“Nine times out of 10 I would come out of there with two to three radios,” he said.

“Then my collection was part of a folk display and it generated so much interest that I thought: `This is all right’.”

Alan’s wife Kath is into needlework and cows. “We used to have radios all through the house, down the hall, everywhere you looked. But now most of them are out in the shed.” Kath said.

“I would not like to estimate how much he has spent on radios and every trip away we find ourselves in antique shops. But it is his passion.”

This item originally appeared in the Launceston Examiner on May 28, 2006. 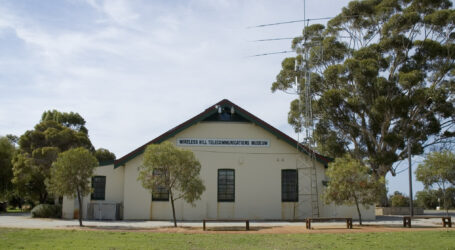