The island of Taiwan is a little more than 200 miles long and it lies a little less than 100 miles off the coast of China. It was settled by migrants from China some 1500 years ago, and it was administered from China until 1895 when it was ceded to Japan. In 1945, the island came under Chinese control once again.

The entire era of radio development in Taiwan was under Japanese administration and the first radio broadcasting station on the island was established at Taipei in the year 1928. This station was on the air at first only on shortwave though soon afterwards a mediumwave transmitter was added. The original callsign was JFAB and the original channel was 30.50 metres, corresponding to 9835 kHz.

Somewhere around 1937, it seems that two different shortwave stations were constructed, one at Taihoku and the other at Tyureki. The original purpose of these two stations was for phone communication with Japan.

Later information would suggest that the shortwave transmitters located in these two communication facilities were rated at 3 kW. The callsigns in use at these two stations as heard in Australia and New Zealand were in the series, JIB JIC JIE. From the scanty information available, it would seem that there were probably two transmitters at the same power in each location.

As was the practice in this pre-war era, communication stations were frequently employed also for program broadcasting. Around the beginning of 1938, program broadcasting was noted from Taiwan, with generally two transmitters on the air simultaneously. The programming was usually a relay from the mediumwave station JFAK, with a bulletin of news in English at midnight in the western Pacific.

Several DXers during this era sent reception reports to these shortwave radio stations in Taiwan, but without response. One listener sent four reception reports over a period of time, but complained in the Australian magazine “Radio & Hobbies” that he had received no response.

However, in the August 1940 issue of the same magazine, column editor Ray Simpson reported that he had finally received a QSL letter from Taiwan after a wait of two years. The letter verified his reception of station JIB on 10535 kHz.

The station manager, Mr Jiro Hayashi, explained that QSL cards were not available, but he included with his letter four postcards showing picturesque scenes in Taihoku. This is the only known QSL from the pre-war shortwave stations in Taiwan.

The last reference to these shortwave stations on Taiwan carrying program broadcasting is around mid 1940. In view of the fact that they were low powered units, it is probable that they were not used for programming on subsequent occasions.

However, the first edition of the World Radio Handboook, for the year 1947, lists two shortwave stations at Taipei in Taiwan under the country heading of China. These two stations are identified as XUPA & XURA with 3 kW each. It is presumed therfore that these two units were the same units identified previously as JIB and JIE.

As far as radio broadcasting during the Pacific War is concerned, there are now references to their usage during this era. 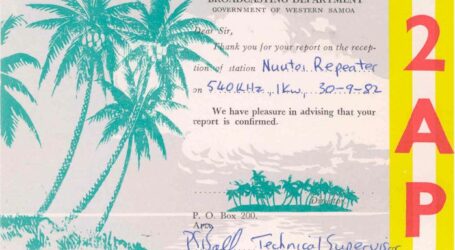