Back nearly forty years ago, I was walking along one of the main streets in the city of Perth in Western Australia with an American visitor. As we passed the studios of station 6IX, I drew attention to this radio station. Our American visitor, who was familiar with the American radio stations and their callsigns beginning with K or W, asked: “What is the meaning of this callsign? 6IX, is this a combination of English and Latin numbers, which can be added together to make a total of 15?”

I explained to him that the callsigns of radio stations in Australia, as with England in the early days, begin with a number indicating the state followed by two letters indicating the individual identification of a particular station. We continued on our way to station 6PM, another radio station with an interesting callsign, and here we recorded an interview for later broadcast .

Actually, the first station on the air in what became the four station Whitford Broadcasting Network (6PM-6AM-6KG-6GE) was 6AM in Northam. The callsign, 6AM had a double application; the early time in the morning as well as the last two letters of its city of residence, Northam. Station 6AM was inaugurated in 1934 and station 6PM in Perth followed three years later. The double callsigns 6AM-6PM, with the obvious allusion to the twin times of the morning and evening, fostered the concept of tuning in any time and all the time.

Now, way back in the early days of radio broadcasting in Australia, a business consortium in Sydney applied for a broadcasting license. They registered the company as Nocturne Radio Station Ltd and their address was 29 Bligh Street, Sydney. At the time, this was the studio location for station 2GB, though around the end of World War 2, they moved into a new location and station 2UE moved into 29 Bligh Street. Nocturne Radio applied for the channel 1230 kHz with either 50 watts in Darlinghurst or 200 watts in Bligh Street. They requested a night time only schedule running from midnight to 6:00 am and the meaningful callsign 2AM. The license was denied.

Back in the pre-war era, amateur radio stations in Australia were permitted to go on the air on Sunday afternoons and late at night with broadcast programming in the mediumwave band. One of these stations was 3AM in Caulfield, near Melbourne, Victoria. Station 3AM with 35 watts on 1173 kHz issued many QSL cards to listeners in New Zealand and Australia.

In more recent years, another station with a time related callsign was established in the northern areas of Cape York Peninsula in Queensland. This was station 4AM in Mareeba with 5 kW on 558 kHz.

Now to the story in Port Moresby, up there in the region of Papua on the island of New Guinea. The agressively progressive radio organisation, AWA with its headquarters in York Street, Sydney established a whole chain of coastal and broadcasting stations in the era before World War 2. One of these units was the broadcast station 4PM which was launched with fanfare and acclaim in 1935. Even though 4PM was rated at only 100 watts, it was enthusiastically proclaimed that the signal on 1360 kHz would be heard “widely throughout the Pacific”.

Way back in 1913 during the spark wireless era, AWA established a coastal wireless station VIG in Port Moresby. In 1921 this facility was reconstructed and a valve transmitter was installed. In the era before the Pacific War, communication station VIG relayed on shortwave the commercial programming from its sister station 4PM. At one stage, these broadcasts were on the air on Sunday evenings twice a month with additional coverage for special occasions. These broadcasts were heard frequently in Australia and New Zealand and occasionally in the United States. A special QSL card, upon which was printed also their schedule, was issued to verify reception reports.

The AWA communication station VIG had been installed in Wonga Cottage at Five Mile, which was located rather obviously five miles from Port Moresby. The studios and transmitter for the commercial broadcasting station, 4PM, were located within Port Moresby in a house on Musgrave Street opposite St Mary’s Cathedral and overlooking Ella Beach.

The broadcasting station 4PM was closed in mid December 1941 due to wartime exigencies and the 100 watt transmitter was removed and placed in storage with VIG in Wonga Cottage at Five Mile.

Several areas around Port Moresby were investigated for suitability for the new station and finally a site was chosen adjacent to Wonga Cottage, the home of the AWA coastal station VIG that also housed temporarily the silent transmitter from 4PM. Several Quonset huts were hastily erected and the equipment for the new 9PA was installed, including a new 500 watt Philips transmitter from Australia. However, this transmitter always operated at half power, 250 watts, due to local electricity restrictions.

Radio station 9PA was officially opened by General Douglas MacArthur and the ABC Director-General, Lieut-Colonel (Sir) Charles Moses.on February 24, 1944. The official inauguration service for the new 9PA was relayed on shortwave to Australia by the adjacent AWA coastal station VIG for re-broadcast by the Australia-wide ABC mediumwave network.

Soon after the inauguration of the mediumwave station 9PA-9AA-9PA and just before the end of the Pacific War, radio station VIG began once again to carry broadcast programming, this time under the slogan “Radio Guinea”. Programming was generally a relay from mediumwave 9PA and some of these broadcasts were taken on relay by the ABC network in Australia.

The few DX reports at the time do not give any form of programming from the new 9PM, though the ownership is clearly stated as AWA. It is thought that this 100 watt transmitter was the same transmitter that was on the air earlier as 4PM and that was apparently on the air subsequently as an extension relay for 9PA. 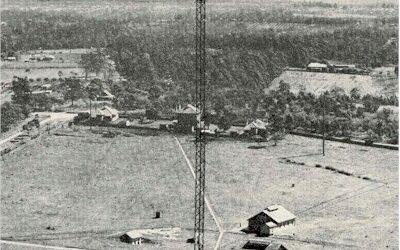