For the international traveler, the country of Greece in southeastern Europe holds two major areas of interest: Their ancient history, and their sun-drenched Mediterranean style holiday resorts.  For those who like to listen to our radio stories each week here in Wavescan, and then read about them afterwards in radio magazines and on internet radio sites, we add a third dimension, their radio history.

Thus in our program today, we present the story of four Little Greek Islands – Part 1, together with their history, their tourist appeal, and their radio backgrounds.  We begin with the irregularly shaped island of Lesbos, the third largest of the many Greek islands.  Lesbos is located on the eastern side of Greece, in the Aegean Sea, a bay like inlet from the Mediterranean.

In recent time, the Greek island of Lesbos has featured in international news as presented on TV throughout the world.  During the Middle Eastern refugee crisis beginning nearly five year ago, some 2½ million people have traversed from the Arab countries, through Turkey, and onward into continental Europe.  Multitudes of these refugees in their onward flight towards supposed prosperity have passed from Turkey, over the island of Lesbos and into Greece.

The island of Lesbos is 30 miles long and 25 miles wide, and it lies just four miles off the coast of Turkey, though it is one hundred miles distant from mainland Greece.  The local population numbers around 86,000 residents, though the island population is almost doubled during the annual tourist seasons.

The capital city on Lesbos is Mytilini which is mentioned in the Christian Bible, in the New Testament book of Acts 20:14.  In AD 56, St. Paul and St. Luke, together with their traveling companions, stopped briefly on the island during the return trip to Jerusalem that St Paul made towards the end of his third missionary journey.

Incoming tourists from Europe and elsewhere are attracted to Lesbos by its quaint villages, popular beaches, hot springs, 11 million Olive Trees, petrified forest, and archaeological ruins.  This island has been dominated throughout its history by many ancient civilizations, including Greece, Persia, Macedonia, Rome and Turkey, though today it is an islandic region of mainland Greece.  Early Christianity came to Lesbos, and thus far 57 basilicas, Christian churches, have been unearthed in their archaeological diggings.

The island of Lesbos hit the international news on September 9 (2020) when a fire broke out at the overcrowded temporary Camp Moria, forcing 13,000 refugees to flee.  A total of ten fire engines endeavored unsuccessfully to quell the blaze at this, the largest refugee camp in Europe.  The hastily erected subsequent Refugee Camp at Kara Tepe houses 8,000 people where living conditions are described as worse than previously at the now burned out Camp Moria.

The first radio broadcasting station on the island of Lesbos was erected near their capital city Mytilini, which back in historic times had been an island separate from Lesbos.  In 1952, a new low power shortwave station on Mytilini was heard in England on 6240 kHz.  The WRTVHB for the following year (1953) indicated that the power level of this new shortwave station was just 100 watts.

For the next several years, Radio Mytilini was listed annually in the WRTVHB, and the last known monitoring reference to this station is found in the the Australian Radio & Hobbies magazine for October 1966, fourteen years later.  Radio Mytilini was always listed as a private station which means that it was probably not fully licensed, though it was tolerated by the government authorities, like so many other private radio broadcasting stations in Greece back then.

A government operated ERT FM station was installed at Mytilini less that ten years later, around the mid 1970s.  These days, all four of the ERT program channels are heard on FM throughout the island of Lesbos, as well as 30 other licensed and unlicensed FM stations.

The island called Corfu is located on the other side, that is the western side, of mainland Greece.  It is an island of rugged mountains and sweeping plains, together with a resort-studded shoreline. The melody, White Rose of Athens, was sung earlier as the White Rose of Corfu.

The island itself is formed in the shape of a sickle, and it is 40 miles long, it is only 5 and 10 miles wide, and it is home to a total of two million Olive Trees.  The island’s cultural heritage spans three thousand years and more, and it came under the influence of nearby Italy, and settlements of Romani Gypsies, and the colonial governments of France, Russia, England, Germany and Greece.  In addition, Corfu was the vacation playground for royalty from Germany, Austria, Denmark and Greece.  In fact, His Royal Highness Prince Philip (Mountbatten), Duke of Edinburgh, the Consort of Her Majesty Queen Elizabeth 2, was born on this island, Corfu, almost one hundred years ago.

Corfu is listed as one of the most heavily fortified cities in ancient Europe with its medieval fortresses and castles.  The population on Corfu island is credited with resisting the encroachment of the Ottoman Empire in the Middle East, and thus their expansion into Europe came to an end.

Available evidence would suggest that the first wireless station installed on Corfu Island was not a Greek station, but rather a French navy station with the callsign FGC.  Initially the Greek government was reluctant to permit wireless and radio anywhere in its territories, though finally the government was stirred into action, and they laid plans in the mid 1920s for a nationwide network of wireless stations throughout their mainland and islandic territories.

The callsign list began with the three letter callsign SXA which identified Athens, and continued through the alphabet, with SXB SXC SXD, etc.  The callsign for the Corfu station was SXK, and this station operated on 900 m (333 kHz).  Station SXK is considered to be the first Greek wireless communication station in Greece.

Five years after the end of World War 2 (1950), the Greek government announced plans for the installation of a mediumwave station on Corfu, though progress was more than slow.  In March 1957, the government radio broadcasting organization ETA inaugurated a 50 kW mediumwave station on 1007 kHz on Corfu as a relay from the parent station in the national capital Athens.  That station is still on the air to this day with 50 kW, though the operating frequency has been adjusted to 1008 kHz.  FM programming is also available.

This feature was written by Adrian Peterson and originally aired on Adventist World Radio’s “Wavescan” DX program of November 22, 2020 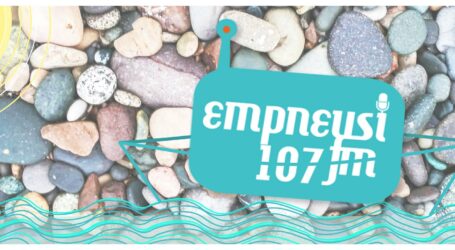